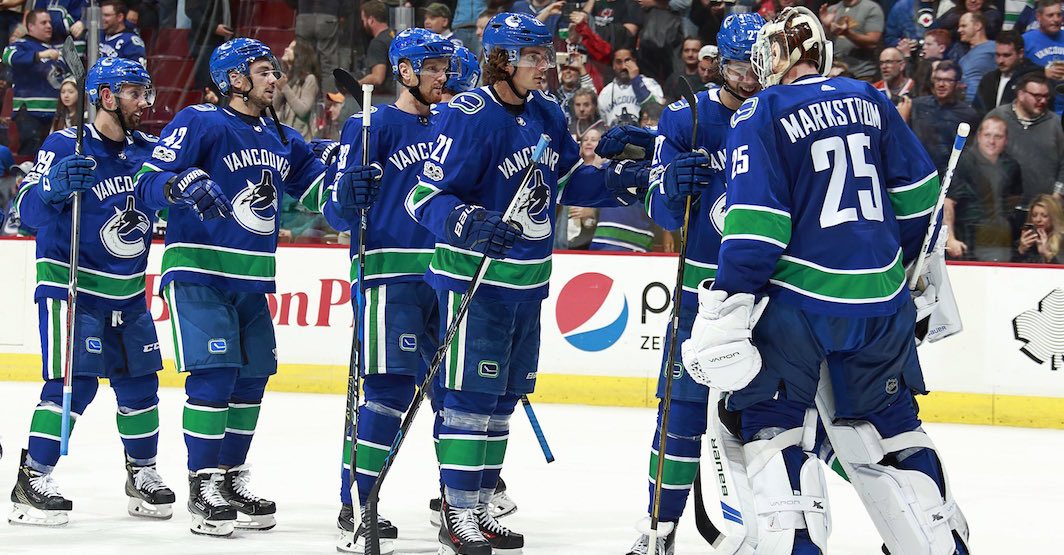 After a long six-game road trip, the Vancouver Canucks returned to Rogers Arena on the right note.

Daniel Sedin’s 1,000-point celebration set the stage for what was an entertaining game, particularly the first period.

The Canucks dominated early and jumped out to a 2-0 lead, but seemed to run out of steam for the latter two periods.

It was night and day, really.

The Canucks had 17 shots on goal in the first 20 minutes. In the final 40 minutes? Just nine shots.

They essentially got a 2-0 lead, and proceeded to defend the rest of the game.

As Pepper Brooks from Dodgeball would say, “it’s a bold strategy Cotton, let’s see if it pays off for ’em”

Well, looks like it paid off. The Canucks held on (thanks in large part to Jacob Markstrom) to beat the Toronto Maple Leafs 2-1 on Hockey Night in Canada.

I wouldn’t try that again though.

Daniel Sedin recorded his 1,000th point last game in Nashville. It would’ve been nice to see him hit that milestone at home, but the good news was the tribute was not only done in front of Canucks fans, but also in front of a national audience.

Too bad Daniel didn't get the 1,000th point like Henrik did, in front of #Canucks fans at home. But getting it tonight guarantees full-scale coverage on Hockey Night in Canada (or at least it should). Will be a moment in the spotlight for a criminally underrated player.

For longtime Canucks fans, it’s been an incredible journey watching both Daniel and Henrik throughout their careers. That journey was highlighted before the game, with words from Markus Naslund.

Daniel Sedin ceremony kicks off with a video from Markus Naslund! #DANIEL1000 pic.twitter.com/nuqRr6lxCV

Also, getting Dorsett to hand Daniel the puck was just so perfect.

One warrior to another.
Congrats #DANIEL1000.
We miss you Dorsett. pic.twitter.com/KJsMs6zd5g

That alone is worthy of praise, but Edler didn’t just hit the net. He hit the top corner of the net!

Also gotta shoutout the vintage Sedinery to set up the play.

Not only did Edler hit the net, but he had a noticeably great defensive game as well.

The Sedins weren’t the only ones showing shades of 2011.

You have to feel for Jacob Markstrom.

Despite playing good enough to earn one on many nights this season, Markstrom is still looking for his first career shutout.

Tonight was his 126th career NHL game, and he was SO close to finally getting that goose egg.

It took the Leafs 36 shots and over 57 minutes before they got one past Markstrom. Despite getting the win, he probably feels a little bummed after that.

Time to add that potential Markstrom shutout to the Marky Shutout Graveyard pic.twitter.com/VYitOgXVVW

After getting over the fact he just missed out on the clean sheet, Markstrom should be happy with his performance. He made 35 saves and kept his team ahead when they ran out of gas.

He may not have gotten the shutout, but he gets the SixPack Superstar. That’s just as good, right?

You could be forgiven if you thought this game was going to be a showdown between Brock Boeser and Auston Matthews.

LET'S DO THIS #LEAFS #CANUCKS pic.twitter.com/g5gI4kbcfq

They’ve been leading the way for their teams this season, but tonight, neither made a major impact on the game.

Not that either of them played bad – they didn’t. But they certainly didn’t take over the game like they do some nights.

Of course, you weren’t really wondering where Matthews was, you knew HNIC was going to track his every move, regardless of what the moves were.

5. Stecher is a warrior

This was not a fun game for Troy Stecher.

The 23-year-old Richmond native had to leave the game early after taking a shot off the ankle.

He returned to the game, but apparently the hockey gods didn’t want him to, because then this happened in the second period.

Stecher needed six stitches to fix that up.

Miraculously, he came back for the third period.

If his actions alone weren’t impressive enough, check out this post-game quote.

“I knew I still could contribute, so I wanted to get right back out there. The face is a long way from the heart, I’m fine. No chiclets gone.” – @troystecher

Stecher is a warrior, confirmed.

If Jake Virtanen scored on this play, it would’ve been a goal of the year candidate.

After blocking a shot, Virtanen raced to try and get some separation from Nikita Zaitsev.

He lost his stick in the process, but managed to catch it and got a shot off while holding it like a mini hockey stick. Impressive stuff from Virtanen, who seemed to be flying all night.

Travis Green seemed to take notice too. Virtanen’s ice-time of 12:52 on Saturday was his second highest mark of the season. The only game where he had more was against Detroit in October when he had eight shots and scored a goal.

You may remember Dart Guy making headlines in Toronto during the playoffs last year.

Well, he made headlines again today for making this bet with country music star and Canucks fan Dallas Smith.

Tomorrow…@MapleLeafs vs @Canucks @LeafsMaz20 vs @dallassmith #TMLTalk wins, Dallas will fly me to next years #Leafs game in Van. & join me in a #Leafs Jersey#Canucks win I will go out to join Dallas at the game in a Vancouver Jersey @TSN1050Radio #ItsOnLikeDonkeyKong pic.twitter.com/enk6BZDiRT

The Canucks won, so Dart Guy will be at Rogers Arena when the Canucks host the Leafs next season – and he’ll be wearing a Canucks jersey. Nice work Dallas!