The Canucks have been on the road for five games and they’ve won once. And after Saturday’s 4-2 loss to the Toronto Maple Leafs, I wouldn’t blame you for living in a fantasy land where it’s 2011 again.

Go to that happy place and stay there until the rebuild has a couple more years under it.

Keep reading the SixPack, though. We need you. We’ll also let you know when it’s time to start watching again.

If you do care to stay engaged, here’s the lowdown on this game: the Canucks outshot and out-corsi’d the Leafs at even strength, but the first four penalties went Toronto’s way. They were pretty much sunk after the Leafs 2-0 5-on-3 goal in the second, despite a decent attempt at a comeback in the third.

Ryan Miller started the season like it was 2010 again.

In the last few games he’s played like he was in St. Louis again.

But this is the new Ryan Miller – the one who’s been in Vancouver for a season and a month now. He’s streaky. When he’s hot, he can steal games, but when he’s not… well, he thinks he’s catching the puck when he’s not.

The one thing you’d hope the Canucks realize is his streaks are becoming predictable.

If he’s rested, he does well. When he’s not – when he plays back-to-backs and many games in a row, he doesn’t. The fatigue gets him, as he admitted last season.

On Thursday, Jim Benning was on the radio in Ottawa and he was asked how important Ryan Miller is to stabilizing the Canucks as they “retool”.

“What we tried to do is bring in an experienced goalie to try and mentor a young goalie. Last year we had Eddie Lack behind Ryan and then Ryan ended up getting hurt and then Eddie finished off real good with us. Then we made the decision to go with Jacob Markstrom this year and he played the other night in Columbus and had an excellent game.

“I think goaltending is a strength of ours for sure.”

He might be right if Markstrom turns out to be great and if Thatcher Demko continues on the path he’s setting right now (he’s been incredible so far this season with Boston College).

But Miller’s a bit of a wild card.

One of his self-proclaimed strengths is reading the play, yet here he was overreading it on a 5-on-3 penalty kill against the Leafs. If ever there was a time to listen to the teachings of Rollie Melanson and stay deep in your net, this would be it.

Miller’s earned a bit of leash this season, but wouldn’t it be wise to start Markstrom on Monday?

2. Hansen is the spark

So who gets to play on the Hansen line next game?

Wouldn’t be surprised if Vrbata and Horvat are begging to play with the team’s sparkplug to get them going next.

Hansen scored the goal that got the Canucks on the board Saturday. He also had five shots, second on the Canucks to only Daniel Sedin’s seven.

He also led the Canucks in even-strength corsi at 18 – well ahead of Henrik’s 13.

Vrbata finally scored a goal. It meant nothing being scored in the last 30 seconds of the game, but at least it could get him going we thought…

Then it was called off after review because the Canucks were offside.

He also hit a post earlier in the game.

Apparently Vrbata broke a mirror, walked across the path of a black cat and walked under a ladder this summer, because his luck is as bad as Alex Burrows’ was two seasons ago.

Anyways, as long as he’s not going, might want to get this guy in the lineup.

Talking about the guy listed in the scoreline at the top – Hunter Shinkaruk.

He’s ready. He was the Canucks best young forward at training camp before he was sent to Utica. Let’s see what he can do.

It’s always comical to hear people say “Look at the soccer, it’s the most popular sport in the world and the most common score is 1-0.”

That’s true, but think about this – when you hear a soccer game had the score of 5-3, you wish you’d watched.

Maybe you’re not a soccer fan at all. Here’s a more hockey relevant example.

Fact is, goals are exciting. If one team has the lead, the other has to try harder to score. Goals open up the game.

During HNIC’s second intermission, Adam Oates and Nick Kypreos were saying the art of the “dirty goal” has left the game. Offensive players stand in front of the net with no fear of being slashed or cross checked, and that’s led to… less goals, according to them.

Weird, because Ryan Miller, who had tons to say this week, said players are allowed too much leeway in front of the net, and if hooking and stick infractions were called like they are elsewhere on the ice, there would be more goals.

Want more goals? Listen to the best coach ever – Scotty Bowman. He said moving the blue line out two feet to expand the offensive zone would allow teams to collapse on their own net. The point threats are nullified because they’ve moved out further.

You can see how the collapse stops offence here: 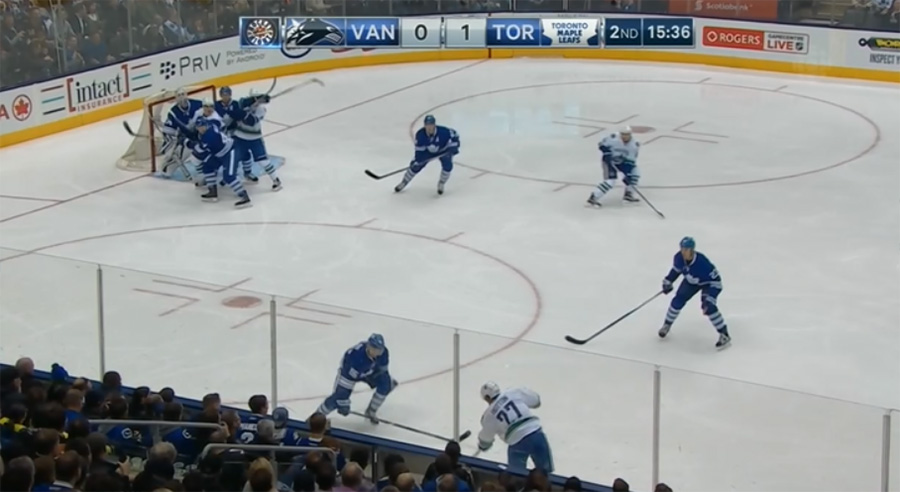 Tough to score through that mess.

With the Saturday game against the Leafs, this seems like a good time to throw it in.

OK Canucks fans, if the team’s going to go through a rebuild you’re going to need to be patient and keep your spirits up somehow.

@patersonjeff without it I would have never known that NHL players water their legs https://t.co/1ADAT3YAmJ

Second I don’t often include my own tweets, but this guy deserves it, no?

Anyone at the #Leafs game want to punch this idiot #Canucks fan for blocking the play to get on TV, go ahead pic.twitter.com/rwXYSWSWHp