Vancouver had so many reasons to play well against Toronto.

To start with, they were three points back of a playoff spot.

Add that they should’ve fed off a crowd completely jacked up by a new team intro, appearances by players from the ’94 team, and killer retro jerseys.

And throw in they just came off a 2-0 road trip that had Canucks’ GM Jim Benning saying he could be a buyer at the trade deadline in order to help the team’s push for the post season.

It wasn’t one of those losses where the bounces went the wrong way either – it was one where they were outplayed, outclassed, and pretty much didn’t show up.

Honestly, it looked like the Canucks were trying to tank. How else do you explain this performance against a team nine points below them in the standings? Against the worst team in the entire NHL?

Great work on the tank picture, but the sad thing is they’re trying to be competitive. The Canucks are spending every cent they can, and they’re a disaster despite it.

It’s a team that could use some elite talent, especially on the back end. Any ideas on how to get that? I’m at a loss.

I know no one in their right mind would want to relive this horror show or spend time looking at the numbers, but you have to look at this possession chart just to revel in how terrible the Canucks were.

It’s actually impressive that they could have so little effort against a team that pretty much threw in the towel by trading away their captain this week. 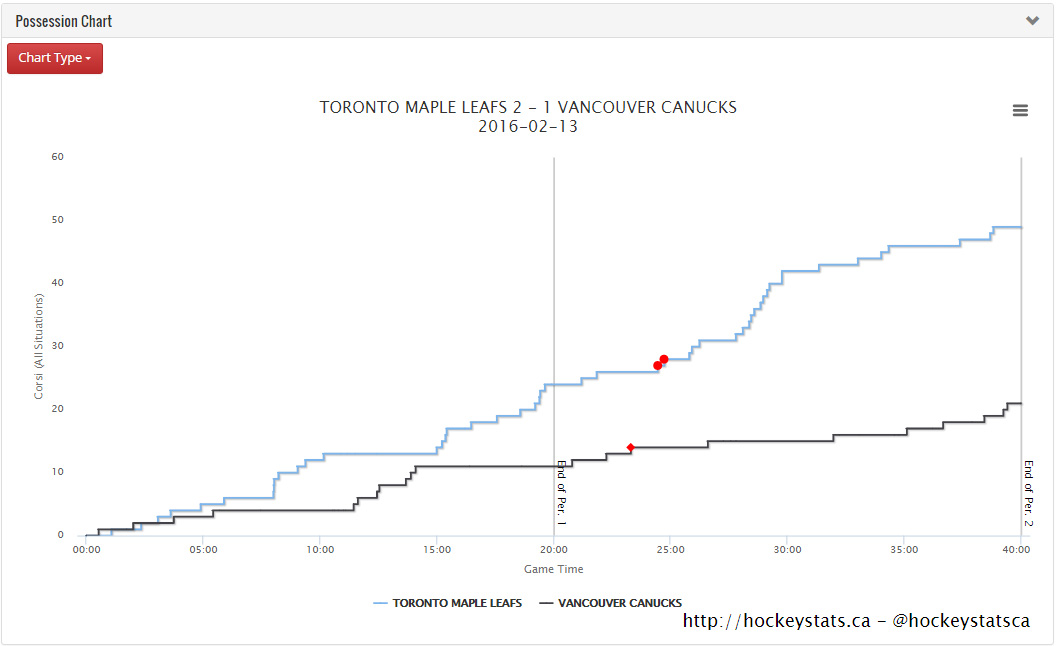 As nice as it was seeing Henrik and Daniel get physical and defending themselves, this is not what you want the team’s few offensive weapons to be doing.

Well, it’s what the Leafs want them to be doing, so give them credit.

It’s also the second-worst home record in the NHL.

So what’s the problem? Don’t forget the home coach has the advantage of making the last change.

Andy Cole (@AndyCole84) tweeted out some amazing audio of HNIC’s commentators having a field day on Willie’s coaching decisions during commercial breaks.

During the first period:

Simpson: Linden Vey has 10 seconds less than Daniel and Henrik.

Hughson: And Bo Horvat’s probably got more than both of them.

Simpson: …I would say, I know the penalties happen, but that’s where Willie would drive me nuts as a star player.

Hughson: And look who’s out after the TV timeout – Vey.

Hughson: As Morensen clears the puck this’ll be an icing call as Bartkowski goes back, so Toronto won’t be able to change and that group’s been out there. I wonder if Babcock will use his timeout and here come the Sedins, or they should.

Simpson: …The opportunity was there and once again you’ve got the fourth line out against a tired group. I’m sorry, but if I’m Trevor Linden talking about his team’s inability to get something going at home, I don’t think the coach is helping with the way he’s coaching this game.

Consider all the opportunities Willie has missed this season, add the 2-9 overtime record, and you should realize three more points in the standings and a playoff spot is a real possibility with a coach making better decisions here and there.

Course Willie had his own reasons:

(Rob was working hard in the trenches getting quotes after the game. Credit Botchford for asking the difference between the way the team plays home and away.)

It never just happens ever.”

To me it sounds as if he’s not seeing the changes he could’ve made.

Is this a better summary?

@omarcanuck Willie going down with the ship like a true captain, problem is that it’s HIM that is steering the ship right into the reef

Hansen, asked why the team can’t string three wins together:

“That’s why we’re a .500 club… if you can’t string wins together, you’re going to be in this situation.”

Didn’t really answer the question, but at least we know why they’re a .500 club now.

I know we’re beating a dead horse, but a Saturday game against the Leafs should’ve been one of the highlights of the year. With Henrik passing Trevor Linden and setting a new record for games played by any Vancouver Canuck at 1141, you’d expect the twins to have a vintage, multi-point night against the Leafs’ AHL roster.

Despite where the Canucks are right now, Hank should be celebrated, and you should watch and enjoy these tribute videos the Canucks created.

One major goal of the Linden regime has been to improve the in-arena experience at Rogers Arena.

They’ve come a long way too, improving the food and drink offerings, and coming up with some fun promotions for the 20th anniversary of GM Place/Rogers Arena.

On Saturday, they played a new intro video, using a new on-ice projector system, and it was very good. Stick with it until it’s halfway through – that’s where it really gets going.

All this Arena upgrade stuff is great, but if you ask me, the atmosphere in the building during the 2011 run was unreal.

Getting that back is not rocket science. Just win.

With the war between #TeamTank and #TeamWinning set to reach previously unseen heights with the trade deadline rapidly approaching, Jim Benning spoke with TSN 1040 Thursday and he was clear which side he’s on.

Benning, asked if the Canucks will be sellers, said no. Not only that, he said he might be looking to add pieces to make the Canucks stronger in their push for the playoffs.

Canucks fans reactions were predictable. Some were angry, some were in disbelief, and as always happens when I tweet Benning quotes, many said he’s lying.

Here’s a screenshot from a reddit thread that starts with Pierre Lebrun’s tweets saying Benning is looking to add come the deadline.

Elliotte Friedman dropped this nugget after the game – and keep in mind he talks to the GMs of all NHL teams on a regular basis.

Benning answers the questions he’s asked in a straightforward way. Not once during his time as GM has he tried to hide things.

Remember how open he was about wanting to trade Kassian, having offers on the table for Miller?

Despite being one of the bottom 10 teams in the NHL, if the Canucks are in contention for a wild card spot, they won’t be sellers, which is crazy considering they are in dire need of some elite talent if they ever want to be contenders.

The one thing that Benning could be holding to his chest is what they’ll do in free agency this summer. If they get Steven Stamkos and find a way to build a decent defence, they could turn things around quickly.

Asked Leafs D Frank Corrado if he got a fair shake in his time with the Canucks. He said “that’s a tough one.”

Corrado had 3 #Canucks coaches in 3 years. Said “it was really frustrating” to get called up a bunch of times last season and not play.

Corrado on time with #Canucks: “Do what you’re told to do, have a good (AHL) playoff run it will be good experience…”

Corrado cont’ “(You) battle through injuries and freeze your bones and play through separated shoulders.” #Canucks

Corrado: “(You) finish playing on June 15, come to training camp and all of a sudden you’re not ready. That’s really frustrating.” #Canucks

Last quote from Corrado on playing Canucks tomorrow: “Would I love to have a good performance to prove some people wrong? Absolutely.”

But it’s hard to argue, given what the Canucks put him through.

Corrado didn’t even mention the icing on the cake – according to the Provies Canucks management told him to set up a place in Vancouver prior to the season because he’d be playing here this year.

They proceeded to base their decision on him, and on the Canucks defence, on a handful of mean-nothing pre-season games, which is a little ridiculous.

Corrado, btw, was making no friends in the game Saturday.

Not sure what he did to Burrows to deserve this, but those quotes wouldn’t do it.

If you thought that was gutsy, check out his quote to Woodley:

Did Corrado sense Canucks frustration? “Absolutely, that’s a group that gets frustrated easily + people have seen that throughout the years”

It was supposed to be a night of celebration.

With that in mind, here are some images that might help you sleep tonight.

That beautiful skate logo on members of the ’94 team: 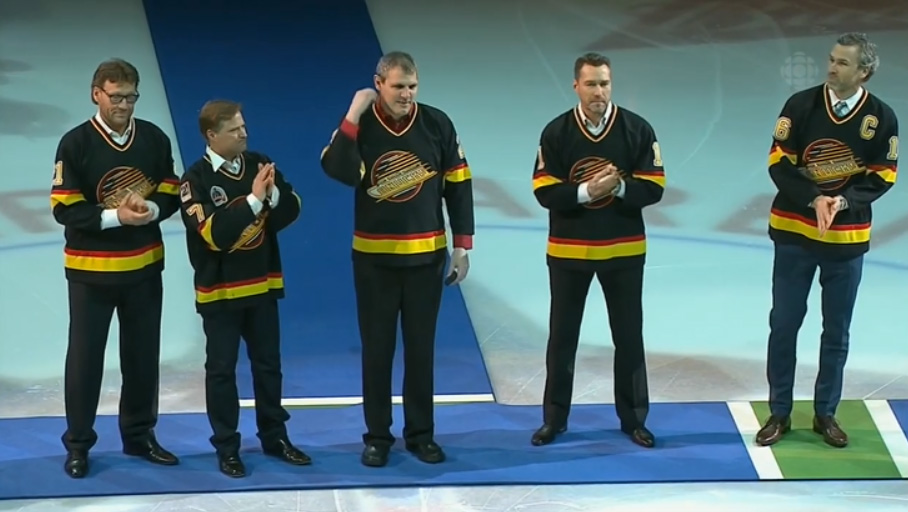 And on a menacing looking Ryan Miller: 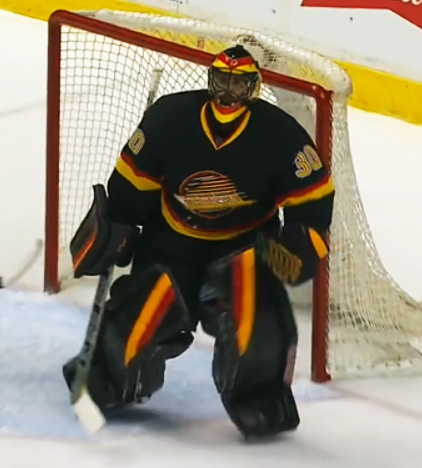 Of course, Stamkos looks even better in it:

If seeing an oversized Stamkos head on a body wearing a skate jersey doesn’t cheer you up, I have no idea what will. 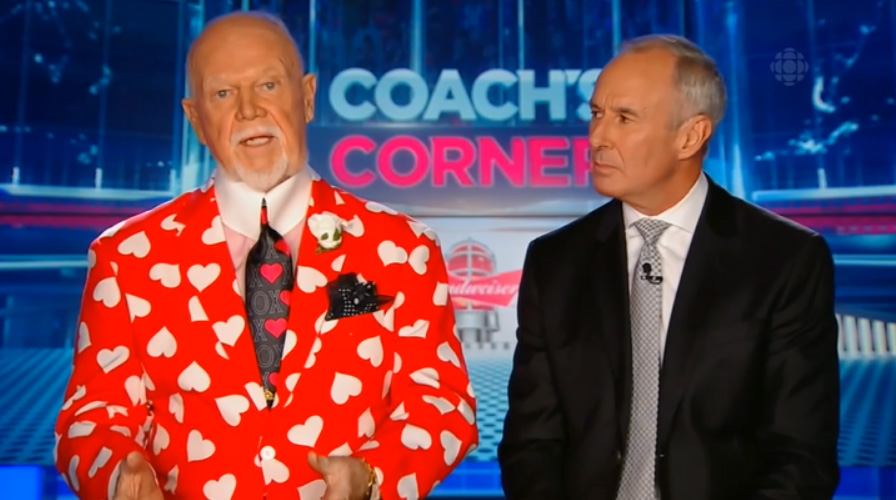