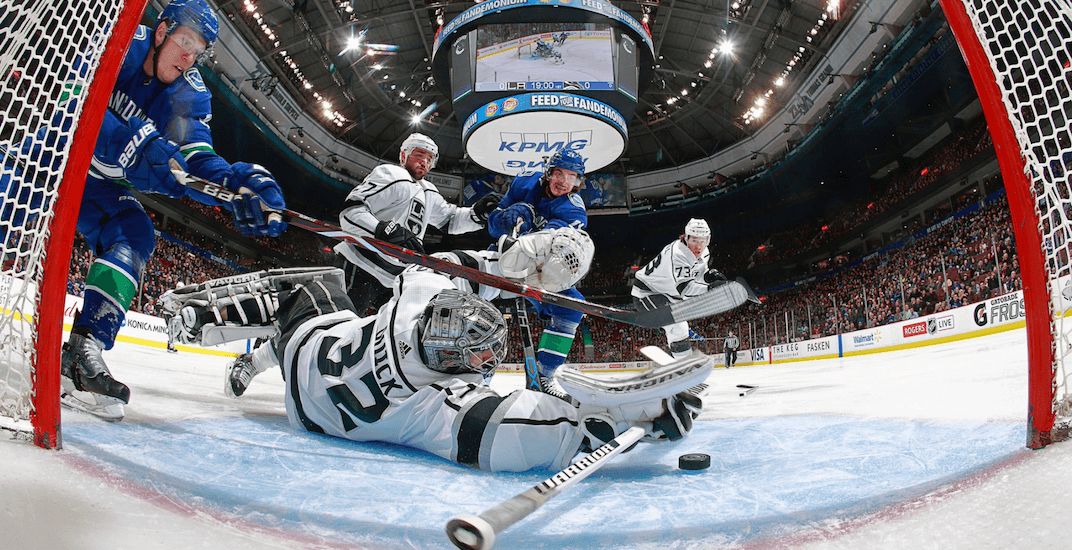 I hope you didn’t blink.

Goal scoring has been a problem that has plagued the Canucks all season, but the plague took a night off on Tuesday.

The Canucks scored four goals in the first 10:02 against the LA Kings, and Brock Boeser added another pair in a 6-2 win.

The first four goals of the game were not only the fastest four the Canucks have scored this season, it was the fastest in nearly a decade.

And that one in 2009 came against the Oilers, so does it really count?

It was only the second time this season the Canucks scored six goals in a game, and the most enjoyable game to watch in recent memory.

Loui Eriksson had three points in the game.

Sound unheard of? That’s because it is.

Tuesday was Eriksson’s first three-point game as a member of the Canucks.

It’s pretty sad that it took over 100 games for this to happen, but better late than never I suppose.

Perhaps the craziest part is how fast he did it – Eriksson had his third point recorded less than six minutes into the game.

His first came a minute in when he deflected a puck on net and poked home his own rebound.

He scored again two minutes later when Bo Horvat set him up with a perfect pass.

He also picked up the lone assist on Vanek’s goal shortly after for his third point in six minutes.

If only it was always that easy.

It’s hard to call it a slump, but by Brock Boeser’s lofty standards, he was due.

Ahh, there it is.

Like a fresh glass of lemonade on a hot summer’s day, Boeser goals are simply blissful.

It had been six games without a goal for Boeser (tied for the longest drought of his career) but a pair of goals on Tuesday put an end to that.

This cross-check from Trevor Lewis put the Canucks on a long 5-on-3, and you just knew Boeser was gonna make ’em pay.

Boeser had to start the shift on the bench since he was considered “injured” on the penalty call, but you think that slowed him down?

It took him just 12 seconds to get on the ice and blast the puck past Darcy Kuemper.

Here’s a better look at the rocket.

Boeser with a rocket for his 2nd of the game and 24th on the season#Canucks pic.twitter.com/lTImjSweK4

Move over Vanek-Gagner-Boeser, there’s a new line in town.

The Canucks rolled out a new line against the Kings featuring Vanek and Eriksson with Bo Horvat, and it didn’t take long for sparks to fly.

They connected on the two Eriksson goals seen above, as well as this goal from Vanek.

Having Horvat back helps the Canucks in every facet of the game, but I want to focus on the power play specifically right now.

I’ve said it before, but I still can’t believe it took the Canucks as long as it did to put Horvat on the first unit power play.

You can point to Henrik’s passing or Boeser’s shot as the most important aspect of the power play, but I think Horvat’s work in front is equally as important.

Take a look again at this first Boeser goal.

That goal doesn’t happen without Horvat getting to that puck first, occupying two Kings while throwing it on net for a rebound.

The Kings are the best penalty killing team in the league, and the Canucks scored on them three times.

The Canucks may not be a great five-on-five team on most nights, but their power play is a legitimate force – no matter the opponent.

The Canucks were lost without Horvat and Brandon Sutter down the middle, and they seem to be getting back to where they were before all the injuries took their toll.

Horvat was all over the ice tonight. He was 75% on faceoffs while picking up two assists, two shots, and a +3 rating on the night.

And of course, the play that stood out the most was his pass to Eriksson.

For that, Horvat is this game’s SixPack Superstar.