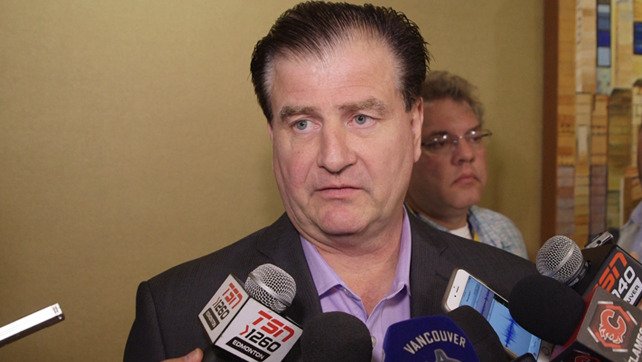 The NHL has ruled on Canucks GM Jim Benning, fining him $50,000 for tampering.

“Canucks General Manager Jim Benning violated the provisions of NHL by-law 15 relating to the inappropriate public comments by speaking generally to his club’s potential interest in players under contract to other NHL Clubs,” NHL Deputy Commissioner Bill Daly said in a league-released statement. “I spoke with JIm and accept his representation that he intended no harm with his comments that he will handle similar questions from the media differenty in the future.”

Benning got into hot water last week for being too honest about his desire to bring Steven Stamkos and PK Subban to Vancouver. The problem? Both players are still under contract and the period for speaking to free agents hadn’t begun yet. That constitutes tampering, and the NHL could have taken away draft picks if they thought it was done with malicious intent.

On his interest in Stamkos, Benning told TSN 1040 radio: “Yes. Yes we will… We’re going to pick up the phone and talk to his agent.”

On his interest in trading for PK Subban, Benning was just as honest.

#Canucks GM Jim Benning tells us he has spoken with #Habs on PK Subban. High price, and "it's a long way from completing a deal like that"

Clearly Tampa Bay GM Steve Yzerman and Montreal GM Marc Bergevin were less than pleased with all the chatter with their players, and the NHL acted appropriately.

“Last week I was trying to be candid with our fans and media about our efforts to improve our team but said too much about players on other teams. I have spoken personally to the NHL and the General Managers involved to apologize and I accept the League’s ruling.”

Benning is an incredible departure from previous GM Mike Gillis, who used to spar with TSN 1040 hosts, and often withheld information seemingly out of spite. It was not unusual for Gillis to go on the radio, say nothing, and have the team send out a press release shortly after.

Benning, on the other hand, can be an open book at times. That’s great for insight, but probably not the best for business.