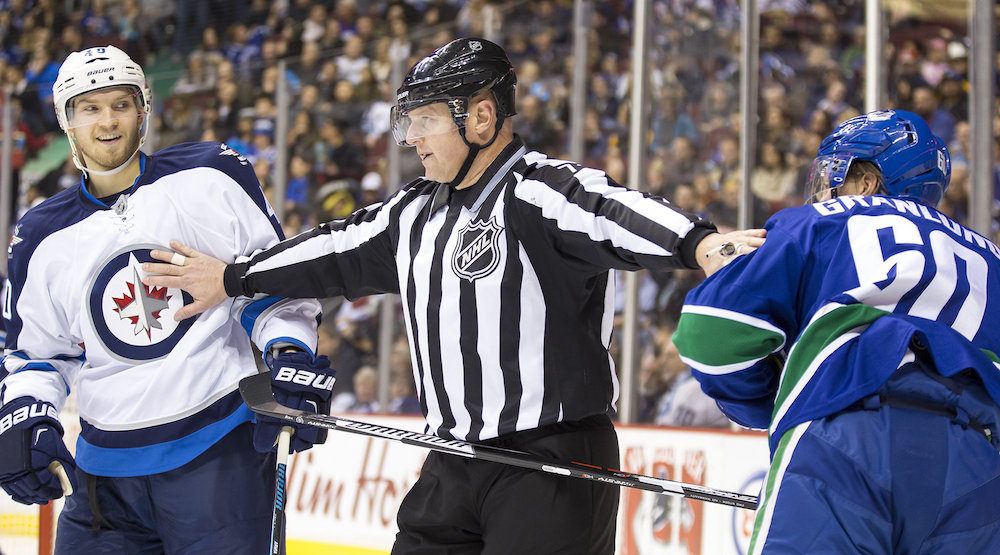 If you wanted to, you could blame Thursday’s loss on coaching.

After beating the Jets 4-1 Tuesday, Vancouver lost to the same team by an identical 4-1 score Thursday.

They squandered an early 1-0 lead, wasted a third period power play that could’ve turned a 2-1 deficit into a tie, yet again didn’t find a good solution when Jannik Hansen wasn’t available to play with the Sedins, and this:

Why did Willie start Miller tonight when it’s a back to back and Markstrom played great on Tuesday.

Taj always has strong takes, but almost everyone in Vancouver (who’s still paying attention to the Canucks) agreed on this one. Willie has to alternate goalies in this Thursday-Friday back-to-back, so tapping Miller after Markstrom played great against the Jets on Tuesday?

Like I said, you could blame coaching if you want.

You could also blame the players and their effort levels, because after playing a pretty even first period and having the lead, Winnipeg led even strength shooting attempts the rest of the way 29-19.

The Jets played better, deserved the win, and got it.

Goaltending could’ve helped Vancouver, so could power plays. But hey, if Willie’s not going to place any importance on these factors, why should we?

It all started so well. Beauty pass from Loui Eriksson to kick things off with Markus Granlund.

Anton Rodin’s call-up from Utica earlier Thursday had me tossing around different possibilities on how he could get into the top-9 forward lines. Granlund’s goal and his chemistry with Eriksson had me thinking why not drop Brandon Sutter to the fourth line C role, let Granlund step in at second/third line centre and have Rodin play on their wing?

It would add more offence, you can’t argue with that. It’s a moot point, though. You’ll see why.

Bo Horvat had this rush leading to a hooking call in the second.

If that rush doesn’t confirm he should be getting all the minutes in Vancouver, I’m not sure what will. New 17? New new 17? Those guys are miscast. See, Horvat’s the Kesler replacement the Canucks always needed. Better attitude too.

Those were good, but the way Hansen started this game was better. Here he was continuing with the attitude he showed against the Leafs earlier this season.

Remember that game? Hansen dropped the gloves with Kadri to defend Daniel Sedin despite having his collarbone fractured on a massive, questionable hit just seconds earlier.

Part 1 of Nikolaj Ehlers rubbing it in that the Canucks passed on drafting him two years ago.

Part 2 of Ehlers rubbing it in that the Canucks passed on drafting him two years ago.

Patrik Laine rubbing it in that Vancouver won their way out of a chance to draft him last season.

Those were the “not good” stuff. The worst stuff was this.

That’s Hansen limping off the ice.

This actual injury was likely sustained during the hit from Perreault#Canucks pic.twitter.com/bC4t8bQ66R

Hansen not going to Calgary, Rodin will be. #Canucks

Maybe Hansen’s not built to be an NHL goon.

Maybe someone else on the team should show a physical edge and lead the team emotionally so he doesn’t have to.

If you didn’t see what led to the Laine goal above, here it is.

Horvat was forechecking, Burrows came in to help (and missed, but that happens), but then Baertschi comes over, way late, doesn’t help, and is caught in completely the wrong place.

To his credit, he wheels quickly and gets back, but then gets even more lost trying to pick up a guy on the backcheck.

Willie’s face at the end of the gif is as angry as you’ll ever see him, and as soon as Baertschi came to the bench that anger was directed at him.

Justifiably so too – supporting the forecheck as the third man in once the puck was already turned over is a high-risk low-reward gamble.

Not picking up a single player on the backcheck… that’s a coach-head-blowing-up-risk, and also low-reward gamble.

But go back and notice how the penalty box opened up at the start of the gif. Baertschi got caught there, and by the time he got back into the play, he was late and out of place…

With Laine and Ehlers flying the other way, that mistake will cost you.

Trevor Linden spoke with TSN 1040 yesterday and he was asked about how much discussion there was about Willie’s future after last week’s crazy loss to Carolina.

“There wasn’t any. Obviously it was the type of game where the second period was one of the best periods we’ve played, and then we lost it for five or six minutes. I think overall, out of 32 games, there’s five or six games that’ve bothered me.

We’ve competed hard, we’ve played hard, and I think in a market like this where everybody wants to place blame, the first place that gets it is the coach. That’s unfortunate, but Willie’s done a good job, and the guys have bounced back strong.”

No discussion? Really? Botch believed there had to have been meetings with the Aquilinis and management, with tons of pressure from ownership to move on from Willie after that game.

In the end, management wanted to stick by their guy at least until the new year.

Of course, if you took everything Linden said over the past couple years to be gospel, you’d believe everyone in the organization has always believed in Willie, never wavered, never had unholy thoughts… we know that can’t be true.

Linden was also asked if he still has confidence in Willie.

“I do, for sure. I think historically if you look back at coaches in this market, they’re the first ones to get blamed.

It’s a tough spot to be. This is the world we live, that’s part of the business and that’s part of professional sports, but overall I think our coaching staff’s done a good job with this group.”

First, this market? He is aware there are other hockey cities, right?

Still, Linden has a point (if he included all hockey cities): coaches do get a ton of blame when things go south.

Sometimes that blame is misplaced, and sometimes a coach like Dallas Eakins rightfully gets canned.

Over Canucks history, they’ve had some terrible coaches – Rick Ley, Mike Keenan, and John Tortorella ring a bell? On the other hand, when Alain Vigneault’s Canucks went through an eight game losing streak in 2009, many were calling for AV’s head, but Gillis stuck by his coach. In that instance, patience was the right answer.

Back to Eakins – when he coached Edmonton, the roster really wasn’t great. Still, most around the NHL were able to see Eakins was in over his head and not doing a great job coaching the team. Not many gave him the benefit of the doubt, the way some do with Willie.

Patience can be paralyzing in life too.

@omarcanuck we don’t know all the details, but some of his deployment is baffling. Sutter, Dorsett etc in close games. Horvat misused

@omarcanuck putting all the blame on Willie is wrong. He’s more than deserving of some of it though.

All of these are on point. Simon says it best, but I believe they’d have won four or five with different lines (think of all the games squandered by the Sutter-Sedin combo and the dreadful power play).

Either way, with just three more wins, the Canucks would be holding the first wild card spot in the Western Conference right now.

Another answer Linden gave was more surprising: he was asked if it’s hard to judge Gudbranson after just 30 games, and the phrasing of that question is important here.

First, the afternoon show gives Linden a built in excuse for Gudbranson’s struggles – which the afternoon show often does when they have Linden or Benning on – second, they didn’t even say he was “struggling”. So why Linden goes in the direction he does in the final sentence here is beyond me.

“I said to a reporter the other day, I think it’s hard to judge anybody in 30 games, whether that’s Loui Eriksson or it’s Erik (Gudbranson). I think definitely the wrist situation is a factor. I think moving to a market that’s very different from where he was and the scrutiny and the eyeballs and all that, just moving is hard.

I think in fairness to Erik, Ben (Hutton) had some struggles at times and they were up and down a little bit.”

Blaming your second-year defenceman for a player in his prime’s struggles? Again, they didn’t ask why Gudbranson has struggled, but Linden felt the need to bury Hutton in his answer.

It’s almost impossible to do justice to Henrik Sedin and what his 1200th game in the NHL signifies.

Henrik and Daniel are model citizens, perfect leaders, and I’ve written this before – they’re the modern day version of Jean Beliveau.

They have done so many incredible things during their time as Canucks and scored so many highlight reel goals, but my favourite off-ice moment has to be how they had to be persuaded to go public with their $1.5-million donation to the Children’s Hospital.

They wanted it anonymous, but because of the exposure it garnered for the hospital, they acquiesced.

Just imagine if they’d scored on this rush with Jannik Hansen on Thursday.

Rogers Arena’s roof blown off by fans cheering for Hank in his 1200th game.

SixPack unecessary due to the Internet exploding.

Alas, it didn’t happen, and here we all are – you reading, me writing, Ryan still slugging away.

You read the last SixPack and thought it’s nice to hear Virtanen’s finally getting into shape, right? Not so fast.

Christmas dinners and parties, seeing all his friends in Vancouver…

Stick to the quinoa and tofurkey, Jake. Plenty of time for gravy, stuffing and mashed potatoes after the hockey career’s over.

Easier said than done, I’m sure.

Note: Thanks to Ryan Biech for his help with gifs in this post