The Canucks have released a teaser of the new threads they’ll be wearing next season, and while minor changes could still be coming, it looks like they’ll be keeping the orca as their primary logo.

Teams will not be permitted to have an alternate jersey next year, meaning that the stick-in-rink third jerseys won’t be seen on the ice in the near future if the orca is chosen.

With Adidas taking over from Reebok as the NHL’s official jersey supplier next season, all 31 teams will be getting new uniforms. The league will unveil the new uniforms in Las Vegas on Tuesday, and although that may not necessarily result in a design change for every team, it’s a good excuse for many to make alterations.

The Vancouver Canucks have perhaps the richest jersey history (not sure if that’s a good thing), of any team in NHL history. Since their inaugural game in 1970, they’ve had numerous design changes. 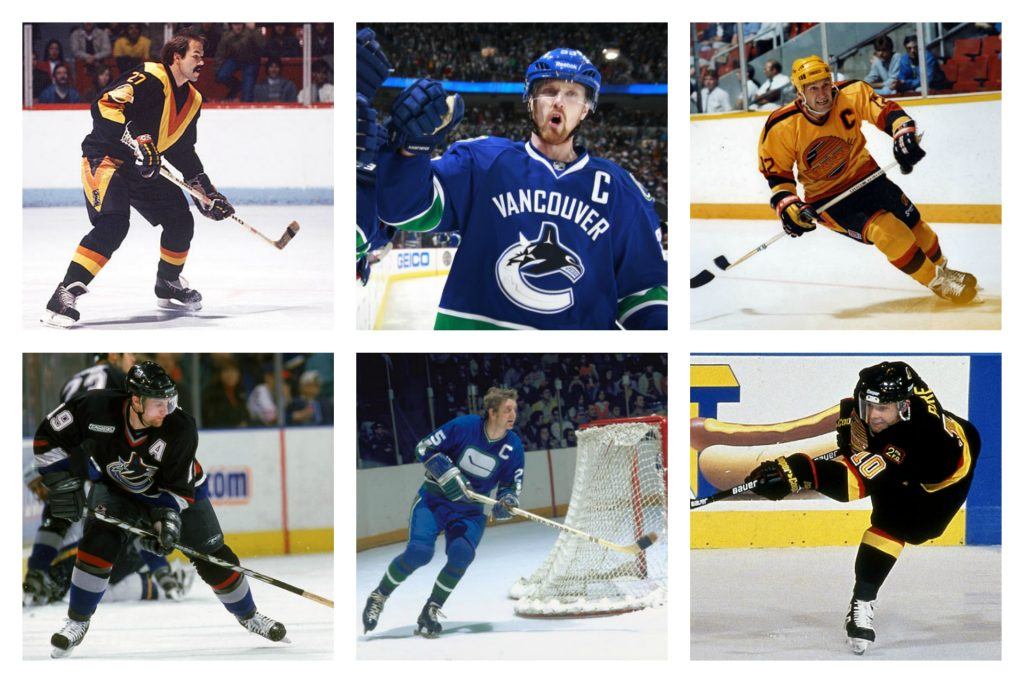 When you add it the Vancouver Millionaires throwbacks, two Johnny Canuck logos, and all the third jerseys, there are a lot of choices.

Everyone has their favourite.

Daily Hive’s Clay Imoo would like to see the team go back to their roots, with the original stick in rink logo.

“The blue and green colours work well together,” Clay said. “The simple stick gives the logo some balance and creates a “C” formation for Canucks. Also, I’ve met the designer Joe Borovich so I may be a tad biased.”

Our own Wyatt Arndt has been trumpeting the return of the skate logo, so it’s no surprise he favours going back to the 1994 look.

“I would go with the skate logo because it’s a bold colour scheme, and it’s distinctly unique,” Wyatt said. “Say what you will about it, that jersey stands out in a crowd, but not in an over the top garish way. Don’t get me wrong, the current jerseys are fine, but there is just something special about the skate logo that I can’t help but miss.”

And as for me? I’ve shared my opinion before, and that’s to stop with any drastic changes. The orca logo has now been around for 20 years, longer than any other in Canucks history. Blue and green have been their colours for a combined 18 years, and seem like the most natural look for a team in this part of the world.

The orca has been criticized, often unfairly.

The idea that the orca is “corporate logo” is flawed. Orca Bay was a company that was formed to represent the Canucks, Vancouver Grizzlies, and Rogers Arena. It wasn’t a name used to sell McCaw’s other business ventures.

Consistency and tradition are important, and keeping a similar look from here on is the way to go. This is the same jersey that Roberto Luongo and the Sedins carved out Hall of Fame careers in. It’s the jersey that Trevor Linden and Markus Naslund last wore. Pavel Bure played with this logo on his chest, as did Kirk McLean.

Canucks fans, of course, are not short on opinions with this topic.

Here’s a selection of comments from Daily Hive Vancouver’s Facebook Page on Monday:

Bring back the “V” or the flying skate and take your corporate logo and shove it!

Bah! The stick-in-rink was nicely simple and memorable. We don’t need a throwback to the Dorka Bay era.

Only in Vancouver can you have a team named “Canucks” with a picture of a whale! Get with it, once again we miss the opportunity to bring in Johnny Canuck!

Only a complete idiot would look at the orca and say that doesn’t represent a team from the Pacific Northwest. We all have our opinions in which are our favourites but the art of the indigenous people there combined with the green and blue fits like a glove. Its not my favourite but it represents us well. I feel majority of people who are for a jersey change are the fair-weather fans anyway.

Bring back the whale with the old colours

In order for the Canucks to have a strong and timeless identity, their brand needs to consist of 4 elements:
1. Skating Johnny Canuck or an updated version.
2. Original Stick in Rink C.
3. Blue, green and white colours.
4. White V’s on the arm stripes.

The Canucks can also do what the Seattle Mariners do and that’s recolour the old logos and designs for alternates.

Logan wants to tinker with the current look:

This uniform with silver in place of the green and third trim colour maybe black would look pretty sharp. Maybe a touch darker shade of blue.

And finally, an idea from Jen:

I think the fans should vote on it.

Let us know what you think, once and for all. What uniforms do you want to see the Canucks wear?!