It was a night of proving wrong everything you thought to be true for the Canucks.

Thought goals were hard to come by in today’s NHL?

Columbus and Vancouver put up eight on Tuesday.

Thought Jannik Hansen had no hands and doesn’t belong with the Sedins?

He had a four point night.

Thought the Canucks were a crappy third period team?

They scored three in the final period to win the game 5-3.

We knew before the game Hansen would be playing with the Sedins. Tony Gallagher, speaking on the TSN 1040 pre-game show, said Hansen can’t score and doesn’t have great passing abilities.

So either Hansen heard his comments and went into full Honey Badger mode, or it was a simple reverse-jinx effect.

Here he is setting Daniel up.

Aside: what a snipe by Daniel. Tortorella’s “stale core” comments must’ve stuck with him.

Forget another Unsung Hero award. After putting up four against Columbus, Hansen’s going for MVP this season.

(Note: Gallagher joked that having said that stuff about Hansen, he’d definitely score against Columbus)

I write notes for myself while watching games. This is a screenshot of what I wrote down this game. 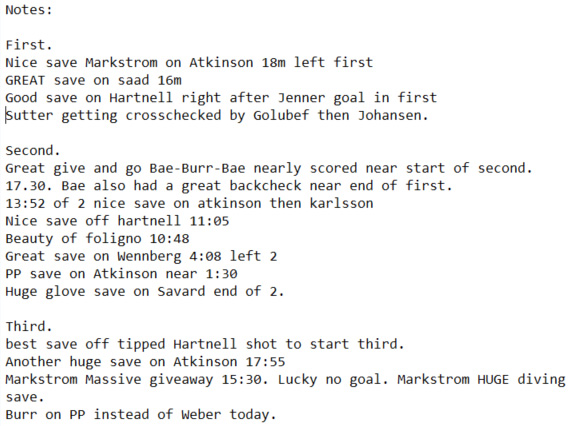 If you don’t want to read it, or have no idea what the notes mean, 12 out of the 15 are about Markstrom saves.

Granted, I might have been watching him closely given it was his first start of the season, but shots in the game were 45-30 Columbus.

Shots in the second period were 22-7.

Here’s a save off Savard to end the first period.

Here’s Markstrom’s “huge diving save” in the second:

(Note: great work by Ryan Biech on this gif)

3. Vrbata will survive (and thrive)

I know what you’ve heard: he’s gripping his stick too tightly, he’s not picking his spots like he was before… he forgot how to play hockey completely.

OK, I don’t know if you heard that last one but it sounds like something an overreacting Canucks fan would say.

The only thing he’s not doing is finishing.

Vrbata leads the Canucks in shots by a huge margin – he has 64 while Daniel Sedin has 56.

His 64 is the fourth highest shot total in the NHL. Those near him on the shots list – Tyler Seguin, Taylor Hall, Vladimir Tarasenko.

Vrbata’s scored on 4.7 percent of his shots. Last year he scored on 11.6 percent.

Hard to say if he’ll get back to that conversion rate given the slow start, but even if he keeps playing the same way and changes absolutely nothing, the pucks will go in more frequently.

So don’t drop him in your pool just yet.

Ben Kuzma had some great quotes from John Tortorella in an article that came out Tuesday.

First, he had to put in the “I told you so,” talking about the Canucks’ youth movement:

“I said that to you guys after I left, that’s what’s needed to happen there,” said Tortorella. “So they’re in good hands. You need to stay patient. When you’re going that (youth) route, there are going to be some bumps.”

Then he moved on to telling Vancouver we had the wrong idea about him:

“I’m always trying to learn about the game, and if you don’t, it’s going to go by you. There’s a little bit of a perception out there that’s it’s my way or the highway and that’s totally false.”

“I love listening to players. I want them to feel that they can come to the coaching staff and we can grow together here.”

Take it up with Burr, Torts. Heard you didn’t want to listen to him until December when you coached here.

Torts must’ve been loving watching his team do this.

I’m not saying he condones the rough stuff…

Wait, yes I am. And he does. Hence why he enjoyed it.

To be fair, Torts has been talking about making the Blue Jackets play harder, and through much of the game against the Canucks they were the better team.

They wanted it more, they played harder, and they outshot the Canucks.

Nice to be covering the team on the other side of a Tortorella “moral victory”.

Spotted this tweet at the end of the game.

So confused with the #canucks. Are they a good team or not?

Funny thing is Canucks fans will have warm fuzzy feelings coming out of Tuesday’s 5-3 win. Really, having to wrest a third period win from a team that should be much easier to beat is not great stuff.

Don’t get me wrong, heading the right way in the third is a welcome change and something the team will use for confidence going forward. Thing is, so far this season, the Canucks have played well against a good team… just once.

There are positives – the youth are developing before our eyes and we have no idea how good McCann, Virtanen, Hutton, and even Baertschi will become. Also, the Sedins have been very good if not dominant so far, and like Vrbata, they simply haven’t got any bounces.

But if this team wants to make the playoffs, they can’t rely on goaltending all season like they did early on.

And that brings to an end “What is this team?”