We’ve seen this two seasons in a row with the Canucks. This season he was so good out of the gates, he had people saying he was playing like he did during his Vezina season five years ago.

We saw it again Sunday against the Islanders. With New York outshooting Vancouver 45-21 in the game, Miller turned the Islanders’ effort into a nearly complete waste of energy.

The Islanders did score late in the third, but Miller shut door the rest of the way, not allowing a goal in either overtime or the shootout, leading Vancouver to a 2-1 win.

Jacob Markstrom did the same thing Friday, stealing points from a Carolina game Vancouver had no business winning.

The question becomes how will the starts be scheduled from here on out.

Markstrom is young and could probably start more. He’s played great since Miller’s injury, when in a rhythm. Miller, on the other hand, needs rest. Road trips especially tire him out, and he’s particular about his sleep habits.

And then there’s coach Willie, who loves having a number one and riding him hard. No question his number one is Miller, despite all the talk of controversies. Somehow goalies are always the main story in Vancouver and it’s not the fans being hard on their starter or a media creation.

Fatigue, declined play, cramps, injuries, backups stepping out of the shadows – it happens over and over again here.

1. How it nearly went off the rails

We’ll come back to Miller and how he played, but for a short while it looked like the game might turn into an all out brawl.

Henrik was hit in the back near the end of the first period and he didn’t play for the rest of the game.

5 min major and game misconduct for boarding to Grabovski pic.twitter.com/zYkfKmMDAy

Snapshot of another angle:

If there was any doubt that hit was in the numbers…. pic.twitter.com/nZHLQzCOCM

The Canucks responded with Hansen, Bartkowski, and Biega grabbing the nearest Islanders and throwing punches.

Five minutes into the second Derek Dorsett made his own statement with this elbow on John Tavares.

At this point, you can’t blame fans for thinking the players would have more to think about than winning the game.

You also have to think if Torts was the coach, Dorsett and Prust would’ve been out there every other shift for the rest of the game.

They weren’t and they only played nine minutes in the game, which the kind of ice time most non-Willie coached teams give fourth liners.

While we’ve long been hoping the fourth liners’ ice time would be cut down, we either have to credit Willie for calming down a game that could’ve gone sideways, or credit Henrik’s injury for finally finding a way to discourage him from playing them. (With the centres moving up in the lineup, they didn’t have a regular one between them).

Either way, not seeing a 15m+ night for Dorsett was a rare and welcome sight.

Henrik Sedin had X-rays. Said its a new injury and he’s not sure if he’ll play next game but that it “won’t keep him out weeks” #Canucks

The game got back on track halfway through the second when Vancouver scored.

But it wasn’t just any goal – it was the first of Ben Hutton’s NHL career.

Hutton can thank that fake shot – probably Hansen’s best play of the year.

(Better than calling it one of his worst misses of the year, isn’t it?)

The only surprising thing is it took Hutton until his 39th game to get it. He’s shown offensive flash all season, he has the second highest assist total for Canucks defencemen (10), and if he was getting the ice time and power play time Edler gets, he’d probably be ahead of him.

He’ll get there when his role increases. For now, here’s a couple shots of the happiest Canucks ever.

To give you a better idea of the battle Miller faced Sunday, here’s a chart of the scoring chances between the teams. 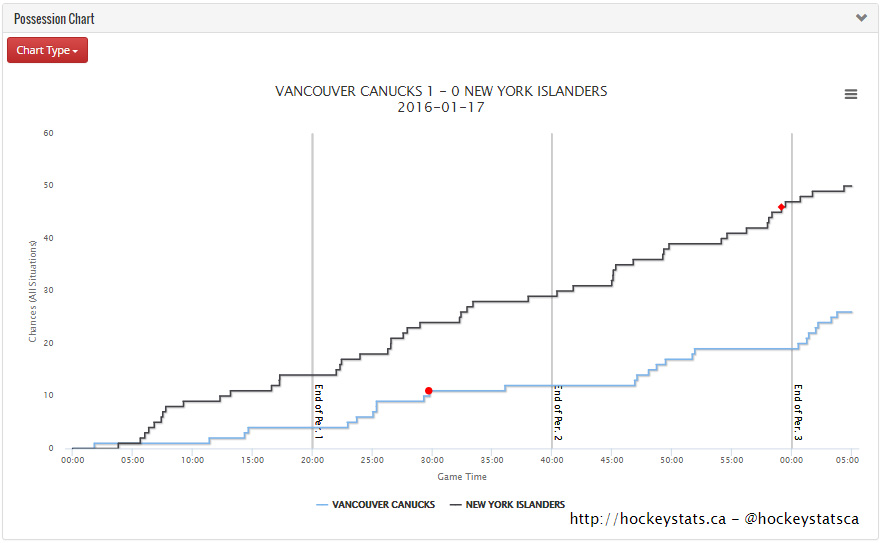 Notice how each period the Canucks hit a plateau – in the first with five minutes left, in the second with ten, and in the third with about seven.

Here are a couple of the more incredible saves Miller made to keep Vancouver in it.

That second one has HON-candidate, TSN turning point, and 1-v-1 champion written all over it.

4. Playing for the shootout

Actually, Vancouver didn’t play for the shootout until the very last minute of overtime. Up to that point they looked dangerous and even led New York in shots and scoring chances at 3-on-3.

Come the shootout, they showed they need only two players to win – Vrbata and Miller.

@omarcanuck sub in Hansen for Canner I think

What would that look like? Vey, Dorsett, Etem? Wouldn’t put it past Willie.

So I guess we’ll never know who the third shooter was going to be.

I’ve written about how Baertschi’s playing a different game than the one he started the season with.

Instead of losing pucks, he’s making plays. Where he tried and failed to outmuscle opponents earlier, he’s being shifty and stickhandling himself out of trouble.

Here’s one play he made bringing the puck in along the boards and not giving up on it, despite the pressure.

Whatever it is that’s got his confidence going – a hot new girlfriend, dominating poker games during flights, calling his mom for encouragement before he goes to bed – he needs to keep doing it.

Speaking of confidence, Jared McCann had a couple of breakaway chances to score the go-ahead goal.

General consensus on Twitter was he should’ve shot early on both, which is a logical conclusion given he didn’t score on the dekes.

Easy to say that after the fact.

I liked the dekes because they showed confidence and a self-belief not many players have. Most would’ve shot, put the puck on net on the chance it goes in. McCann wanted to make sure of it.

He didn’t manage, so it looks like the wrong decision, but if you ask me, the Canucks are lucky to have a player who’ll try these moves.

Let’s end on a lighter note.

A couple of Canucks-related Twitter jokes from the past few days.

Second, this exchange between Tanbir and Ray Ferraro. 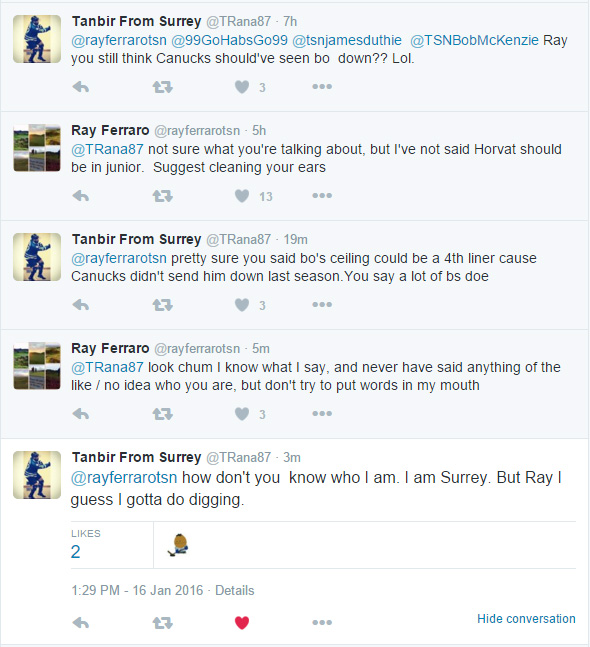 Note: Thanks to Ryan “gif-master” Biech for his help with the gifs in this post