As expected, the Canucks announced that they have hired Doug Lidster to assist new Canucks head coach Willie Desjardins behind the bench. Lidster was Desjardins’ assistant for the past two seasons with the Texas Stars of the AHL.

If you were a Canucks fan in the late 80s and early 90s, this hiring is a little more intriguing than a usual assistant coaching hire.

Lidster played on the Canucks for ten seasons during his playing career and will be rejoining the Canucks for the first time in 21 years. He is the fourth highest scoring Canucks defenceman of all-time.

The 53-year-old from Kamloops was also briefly a captain of the Canucks in 1990-91 when he shared the captaincy with Trevor Linden and Dan Quinn. He was traded to the New York Rangers in 1993 for John Vanbiesbrouck in an unusual move made to protect young goaltender Kay Whitmore in the expansion draft. He went on to win a Stanley Cup with the Rangers but I don’t want to talk about that.

Lidster also has an uncanny resemblance to Jerry Seinfeld: 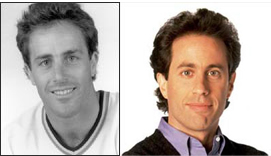 It remains to be seen if assistant coach Glen Gulutzan, who worked with Desjardins in Dallas two years ago, will be joining Lidster behind the bench. Desjardins was non-committal when questioned about Gulutzan at his introductory press conference.