After a very busy draft weekend, it looks like Trevor Linden and GM Jim Benning will continue to make headlines this Tuesday as the NHL unrestricted market kicks off. It looks like the Canucks will try and make one major signing as it appears that they are very interested in signing veteran goaltender Ryan Miller.

One area of concern entering next season for the Vancouver Canucks is the reliability of the relatively unproven duo of Eddie Lack and Jacob Markstrom. But it appears that Canucks management will be looking at upgrading the position as soon as Tuesday:

Ryan Miller and his wife spotted getting off an L.A. Flight at YVR this afternoon. #goalieofthefuture? #canucks

Ryan Miller was one of the most sought after trade deadline acquisitions last season, and was ultimately shipped from Buffalo to St Louis for a very large return. But he never seemed to get comfortable, and the St Louis Blues were quickly eliminated the first round of the playoffs by the Chicago Blackhawks. By the end of the season the Blues did not offer Ryan Miller another contract, meaning he becomes an unrestricted free agent on Tuesday. 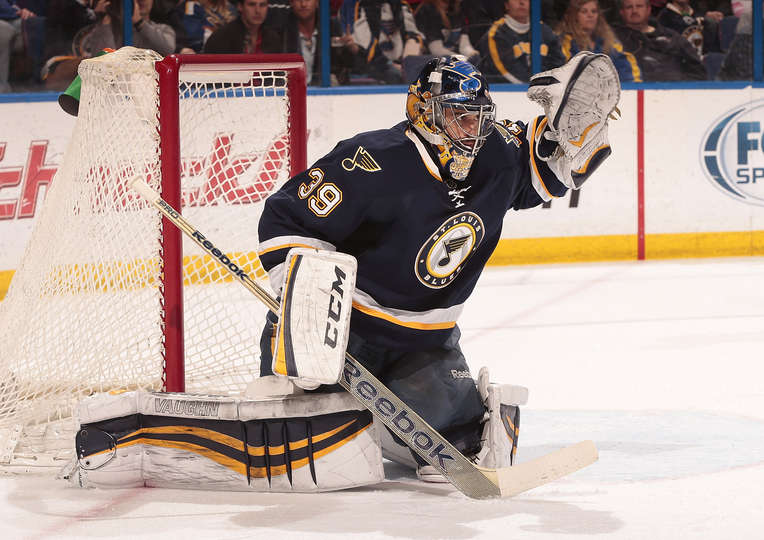 So what is the connection with Ryan Miller and the Vancouver Canucks? In order to be closer to wife and actress Noureen DeWolf in Los Angeles, Ryan is looking to make a coastal NHL team his next home. With L.A. (Quick), Anaheim (Gibson and Anderson) and San Jose (rebuilding) not being interested in his services, that left the Canucks as the only option on the Pacific coast.

GM Jim Benning and Ryan Miller do have a past, as Benning was the Director of Amateur scouting for the Buffalo Sabres when they drafted Ryan Miller. So it is not surprising that Ryan Miller would be the Canucks first choice in an attempt to upgrade their goaltending.

I can’t say that Ryan Miller is a definitive upgrade over Lack, but I can say that at this point, he will be an upgrade over Markstrom. He will provide a stabilizing presence in net and has shown in the past that he can ultimately carry a team (which this Canucks team may need to make the playoffs). Given this, if the Canucks can convince Miller to sign a 2 or 3 year deal with a reasonable cap-hit, but he would have to prove to the fans that he is worth that expenditure. The potential signing of Miller has me a bit skeptical, but the reality of last season is that Lack may not be to carry the workload of a full season and remain healthy.

If the Canucks do sign Ryan Miller, I would expect Miller to start 45-50 games, and Lack would start between 30-35.  But Markstrom does require waivers to be sent to Utica, and I would not expect him to clear. So if Miller is signed, do the Canucks try and trade Markstrom for another asset?

I guess we will find out on Tuesday…