It was expected this year that the Canucks would let their young players have an opportunity for full time and meaningful roles. Names like Jake Virtanen, Cole Cassels, Jared McCann and Frank Corrado were being thrown around as the Canucks youth movement. One player that wasn’t really considered an option was Ben Hutton, but the smooth puck moving defenceman has quickly made an impression.

There have been jokes made on Twitter that Canucks fans are feeling “Huttonmania”. But it’s good to be excited as the Canucks haven’t had a defenceman like this since Alex Edler and the late Luc Bourdon. Players like Frank Corrado and Adam Clendening had teased their potential but had flaws to their game. Hutton seems to have that full toolbox of skills that the Canucks so desperately need.

Where did Hutton come from? 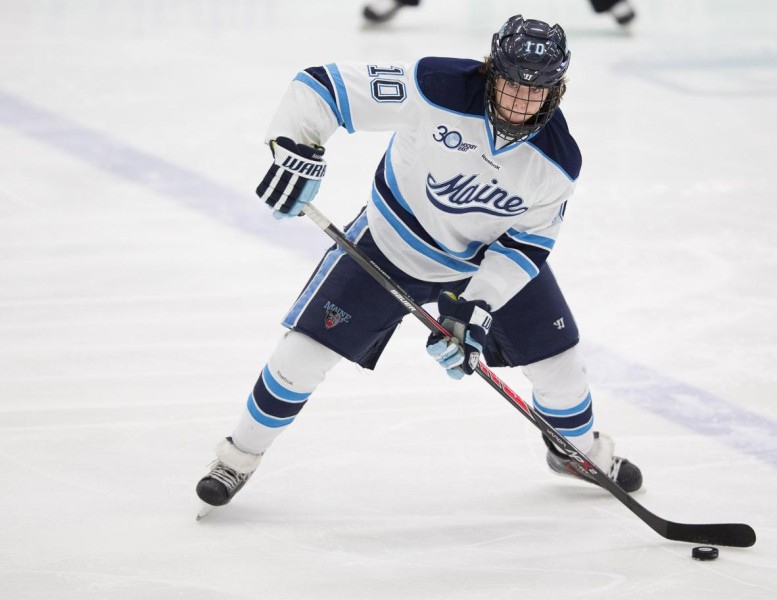 Ben Hutton was selected 147th overall in the 2012 NHL Entry Draft by former Canucks GM Mike Gillis. As was common during Gillis’s tenure, he would select college-bound players in later rounds as they would be able to take more time to develop.

After being selected in the 5th round, Hutton went to University of Maine where he quietly had a successful college career.

Following the 2014-15 college season, Canucks management was able to convince the Brockville native to turn pro and join the Utica Comets. Hutton appeared in 4 regular season games with the Comets, scoring once. However he was a healthy scratch throughout the entire playoffs, while other prospects like Frank Corrado and Adam Clendening led the Comets to the Calder Cup Finals.

In retrospect, Hutton being unable to get into the Comets lineup for the playoffs seems ludicrous. Hutton played so well in the preseason that Canucks management were willing to lose Corrado for nothing on waivers.

In a season preview, TSN scout Craig Button listed Ben Hutton as the 7th best rookie, which given the other names listed, is pretty impressive.

Why has Hutton been successful?

One fear with young defencemen is how they handle themselves in the defensive zone when jumping to the pro ranks. Hutton is able to use his hockey sense and quick stick to avoid getting himself in trouble.

Hutton with his best Gandalf impression – "You shall not pass!" #Canucks pic.twitter.com/TqfvtAcs2L

The gif in the tweet is a prime example of how Hutton is able to avoid getting himself in trouble before it happens. Hutton quickly closes the gap on Dustin Brown, pokes at the puck, causing Brown to lose control. Hutton then pivots, lifts Brown’s stick, takes a couple of strides before making a smart outlet pass out of the zone.

The play above just oozes confidence.

Hutton isn’t afraid to carry the puck. He is able to look past incoming forecheckers, fake them out and move the puck forward. This is a godsend for Canucks forwards, as they don’t have to battle an oncoming defenceman while retrieving the puck off the boards or glass.

Opposing defenceman will have to back off as the Canucks are coming through the neutral zone with speed, and most importantly in full control of the puck.

Both of those aspects of Hutton’s game will be interesting to follow over the course of a full season, as he may get himself into trouble a few times. The risk of those turnovers are heavily outweighed by how useful a puck in transition can be for creating offence.

Another aspect of Hutton’s game that has seemingly gone unnoticed, likely because he does it so effortlessly, is his ability to get shots through.

As you can see, simply getting the puck past two players and on the net causes the Blues to lose coverage on Daniel Sedin, who quickly pounces on the rebound. The 22-year-old defenceman had 6 shots in the game against the Oilers on Sunday and 4 more shots on Friday against the Blues.

Canucks fans love to rag on Luca Sbisa, but if Hutton can continue to make Sbisa look better (as he has done so far) then the Canucks may really have something here. With that said, it would be great to see Hutton play with a more dependable partner like Dan Hamhuis. Having a veteran to cover for him would allow Hutton to have more free reign to create plays.

The former 5th round pick has quickly gained the trust of the Canucks coaching staff, playing more than 17:30 in his short NHL career. He also currently leads all Canucks defenceman with 3 points.

Where does Hutton go from here? 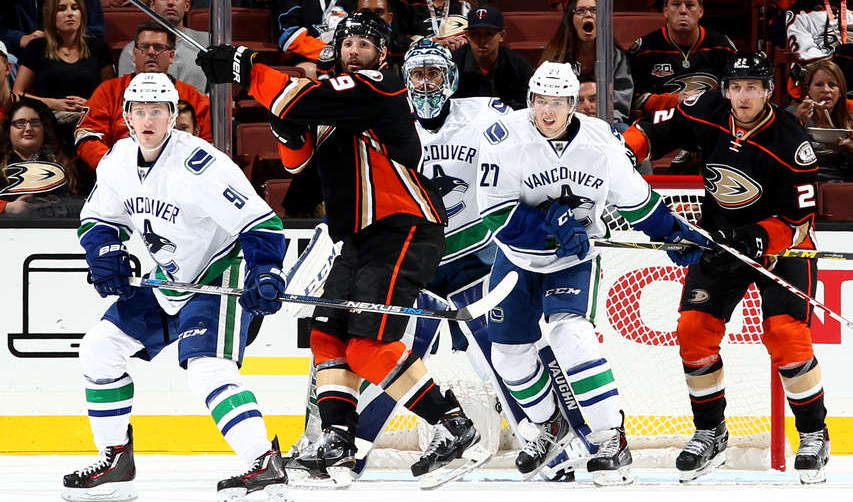 With tempered expectations, Hutton still has aways to go before he reaches his ceiling. Currently manning the point on the 2nd power play unit, if the Canucks power play continues to struggle, we may see Hutton get some PP time with the Sedin twins.

Hutton has played just 28 seconds on the penalty kill in 6 games, which is amazingly low for any defenceman. He’ll likely get his chance on the PK as he gains the trust of his coach.

There will be some ups and downs for Hutton this season, but if he can continue to learn from his mistakes and use some of the skills outlined above he should continue to thrive.

The interview above with Joey Keyword was during the 2012 Canucks Prospect development camp, and one quote stuck out:

I kinda wanted to make a name for myself to let people know who I am and I think I’ve done a pretty good job at that.

Hopefully they know who I am now.

It may have taken just over 3 years, but Canucks fans sure know who Ben Hutton is now.