Things didn’t go exactly as planned this weekend for GM Jim Benning and the Vancouver Canucks.

Benning came into the 2015 NHL Draft confident he could land extra draft picks in a deep 2015 pool, but soon realized it wasn’t going to be as easy as he thought. With trades for Eddie Lack and Kevin Bieksa in the works, things took a turn that Benning did not foresee.

The market for Eddie Lack was not as high as many had been led to believe. A low second round pick seemed attainable for the popular Swedish netminder, but this changed when Buffalo’s Tim Murray traded for Robin Lehner. Tim Murray gifted his uncle, Bryan Murray (GM of the Ottawa Senators), the Sabres’ 21st pick in the draft in exchange for Lehner and David Legwand.

This was a high price to pay for a goalie that was not considered the best on the market, although Lehner is younger (age 23) and is more controllable from a contract point of view. Legwand’s inclusion is nothing more than a salary dump on the part of the Ottawa Senators. The Senators hit a home run with this trade and eliminated Lack’s most likely landing spot.

Lack was shuffled off to the Carolina Hurricanes for a 2015 3rd Round Pick (#66 overall) and a 2016 7th Round Pick. The idea of dealing Lack in a hot goalie market is logical. What actually transpired was nonsensical.

Trading a goalie as good as Lack is bizarre when the return is mediocre. Benning’s only victory in this deal is that he was able to move Lack to a market that is far removed from the bright lights of Vancouver. 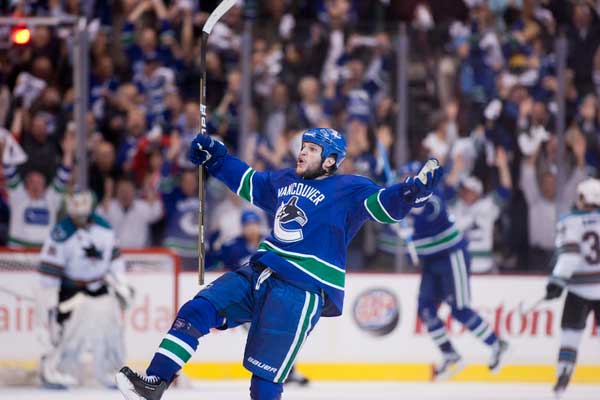 As for Bieksa, the deal that Benning felt was a lock, never materialized.

Still no trade between San Jose and Vancouver on Bieksa, both teams never were able to agree on exact components…. not yet anyway

There is a lot of mystery regarding why the Bieksa to San Jose trade never consummated, but Elliotte Friedman in his 30 Thoughts column shed a little light into the matter.

Wilson is tough to close a trade with, a strategy that makes other teams crazy.

According to a couple of different sources, three entities — Bieksa/Overhardt, the Canucks and the Sharks — were working on this for at least a week and probably longer. In fact, the player recently visited the San Jose area with his family to look at houses.

Knowing that, it’s incredible this didn’t work out. Everyone involved had plenty of time to understand the parameters. As you can imagine, there’s a lot of private disgust.

Friedman is as credible as they come. If you read through the tea leaves, it appears that Benning believed he had secured San Jose’s 2015 39th overall pick for Bieksa, but Doug Wilson, San Jose’s GM, changed the deal at the 11th hour. We may never find out what truly happened to scuttle the Bieksa trade, but the fact remains that Benning did not deliver on adding those 2015 draft picks he coveted.

The Sharks eventually dealt the 39th overall pick, as well as their 2nd rounder in 2016 and their 6th round pick in 2017, to the Colorado Avalanche for the 31st overall selection.

This weekend was a tough pill to swallow for Canucks fans. While Benning found it tough to make trades, the Calgary Flames landed Dougie Hamilton, the LA Kings Milan Lucic, and the Edmonton Oilers Cam Talbot and Griffin Reinhart. Oh yeah, the Oilers also added some guy name Connor McDavid as well. Even the Toronto Maple Leafs trumped Benning by turning the 24th overall pick into the 34th, 61st, and 68th overall picks.