A day after Jim Benning pulled the trigger on a deal involving 19-year-old centre Jared McCann, fans and media alike are still dissecting the deal.

It’ll be a debate that will likely last for years.

The Canucks traded McCann, along with a second and fourth round draft pick, in exchange for Erik Gudbranson and a fifth rounder.

So… Who won the deal? To answer that with certainty, we’ll have to have a crystal ball.

Usually, the team that wins the trade is the team that gets the best player in the deal. If McCann can become a #1 centre, Florida wins. That’s not likely though, as most have McCann pegged as a future #2 centre. A #2 centre is still a valuable asset though and Florida could still win the deal.

Thank you Vancouver and @VanCanucks for the opportunity and support in making a dream come true!

Given McCann’s age, the variance of how good (and how bad) he could be is high. Cody Hodgson was a surefire future star at age 20, and he’s now an AHL player. Still, I would bank on McCann becoming a very good second line centre in the years to come.

Jim Benning is too.

“I believe in Jared Mccann,” Jim Benning told TSN Radio Wednesday evening. “I believe he’s going to turn into a top-six forward in the NHL and be a real good player.”

So this isn’t a Cody Hodgson “he isn’t as good as you think he is” type of statement trade from Benning, although there are other similarities with McCann and Hodgson.

It appears this move wasn’t simply a matter of getting a player they liked in Gudbranson. Management’s displeasure with McCann’s attitude has been whispered off the record in hockey circles for months.

Gudbranson is four years older than McCann, which sounds worse than it is. Remember that defencemen typically take longer to develop than forwards. Still, at 24, we’re not likely to see nearly as much variance in Gudbranson’s ability. Zdeno Chara – who scored 9 points in 82 games as a 24-year-old in his last year with the Islanders – is the exception, not the rule.

@VanCanucks So pumped to get started! #VanCity 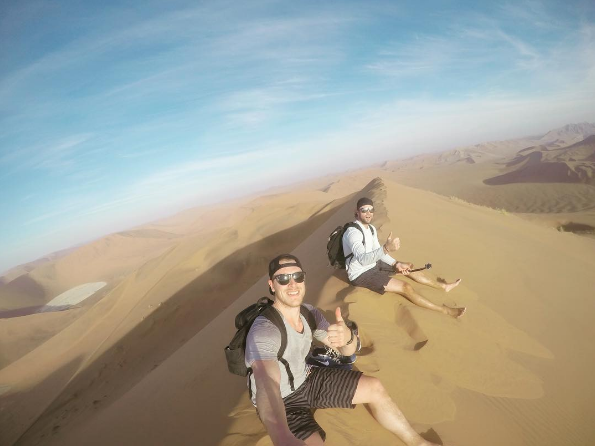 So how good can Gudbranson be? That’s the question. If he can be a top pairing, physical shutdown defenceman then this deal will look good for the Canucks.

“He gives us size and strength, he’s 6-5, 230, he can make a good first pass with the puck, he’s got a real hard shot, he can hammer it from the back-end,” said Benning. “He’s a high character person. When we picked two overall (with Boston in 2010) when we drafted Seguin, Gudbranson went [third overall]. I spent a lot of time getting to know him, he’s a wonderful person, he has a chance to be a leader of our group going forward… We think he’s going to be a good fit playing with Ben Hutton.”

Gudbranson was fourth among Panthers defencemen in average ice time last season. He also led all Panthers in ice time on the penalty kill. But his role with Florida grew as the season went on.

“We’ve seen a big improvement in his play this year,” said Benning. “Playing with Willie Mitchell the first half of the year, I think he learned a lot from Willie. Then when Willie got hurt in the second half of the year, he kind of came into his own. He was one of their leaders in the playoffs, he played 26 or almost 27 minutes a night for them in the playoffs. We feel like he can grow into a matchup d-man going forward.”

Indeed, Gudbranson led all Panthers defencemen in ice time during the playoffs. He played 26:54 per game, although that number is inflated by three overtime games, including two that went to double OT.

Defencemen with the age, size, and pedigree of Gudbranson don’t grow on trees. You have to pay a premium for them.

The wild card in this trade is the second rounder, 33rd overall, that the Canucks gave up. That’s a pick that could come back to bite them, although the odds are that it won’t.

Since 2000, just four impact players (Ryan O’Reilly, James Neal, Loui Eriksson, and Nick Schultz) were drafted with the #33 overall pick. The rub is that finding impact players outside of the draft is extremely difficult and costly. The draft is a lottery, but you can’t win if you don’t have a ticket.

So where does this leave the Canucks going forward? They have better balance, given how thin they were on the blue line and how many forward prospects they have in the pipeline.

Gudbranson helps them both now, and in the future, though he won’t come cheap.

One reason #FlaPanthers traded Erik Gudbranson: told he turned down four year deal worth $4.5m per before taking one-year bridge at $3.5.

Expect a contract extension for Gudbranson, somewhere in the $5 million per season neighbourhood.

With Alex Edler under contract for three more seasons, Chris Tanev for four more, and Ben Hutton under club control for the foreseeable future, the Canucks’ top-four is set for years to come.

They’re also set at centre until Henrik Sedin retires, with Bo Horvat, Brandon Sutter, and Markus Granlund in the fold. They could also add a centre in the draft.

“We’re going to draft the best player at five,” said Benning, adding that he has a defenceman in the top-five of his draft list.

The Canucks are said to be interested in centre Pierre-Luc Dubois, although it appears they will draft a defenceman, likely Olli Juolevi, if Dubois is taken before they pick at #5.