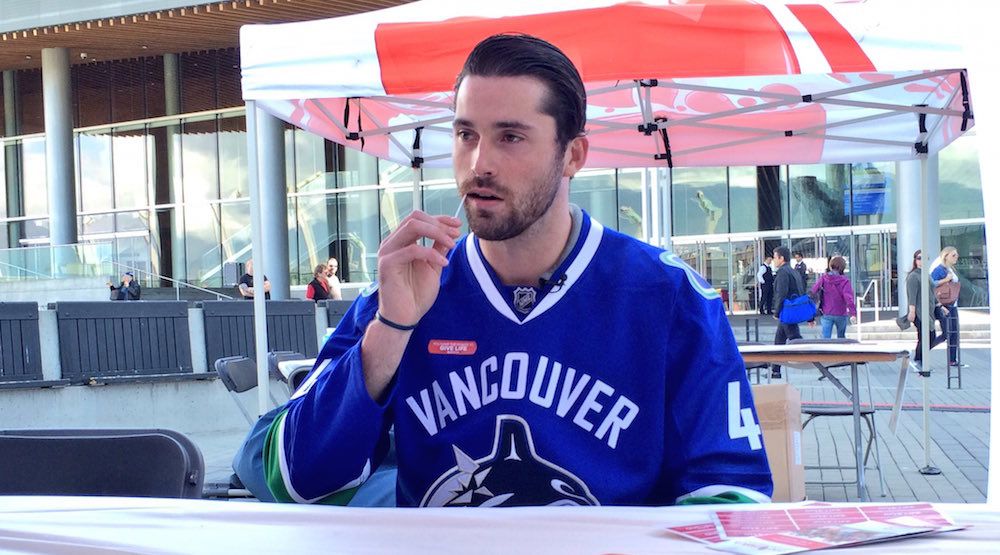 New Canucks defenceman Erik Gudbranson is making a difference in the community before ever plays his first game for his new team.

The hulking 6-foot-5 defenceman is lending his name to the #MenGiveLife recruitment campaign, put on by the Canadian Blood Services.

Gudbranson was on hand at a media conference at Jack Poole Plaza in Vancouver on Thursday to raise awareness about the importance of becoming a stem cell donor, particularly for men age 17-35.

For Gudbranson, this is a cause that hits close to home.

“My little brother Dennis in 2002 was diagnosed with AML leukemia,” said Gudbranson, ahead of World Marrow Donor Day on September 17. “He received in 2004 a bone marrow transplant, a stem cell transplant, from a beautiful woman out in Newfoundland. She took the time to go out, get swabbed, it’s a simple process.”

A number of TV cameras showed up to catch a glimpse of Gudbranson, as he showed just how easy the donor process is. It’s par for the course in Vancouver, something that he’ll need to get used to after his time with the Florida Panthers.

“This is awesome, I’m really excited to be here,” Gudbranson said about the spotlight on him. Media attention can sometimes be a negative for NHL players. But when it comes to having a platform to help out a cause like this, it’s all positive.

“Certainly, we had done a lot of work before, and the people in Florida were absolutely amazing in our cause, but obviously we get a different level of traction here when it comes to something like this.”

Gudbranson is expected to play a key role on the Canucks’ defence next year, likely alongside second-year defenceman Ben Hutton on a second pairing.

The Canucks will begin training camp on September 23rd and play their first preseason game on the 27th.

World Marrow Donor Day serves to generate awareness about being a stem cell donor and the impact of blood stem cell transplantation on patients’ lives. The goal of the #MenGiveLife campaign is to gain 1,000 new registrants online, in particular young men between the ages of 17 to 35. Donors can register at blood.ca.