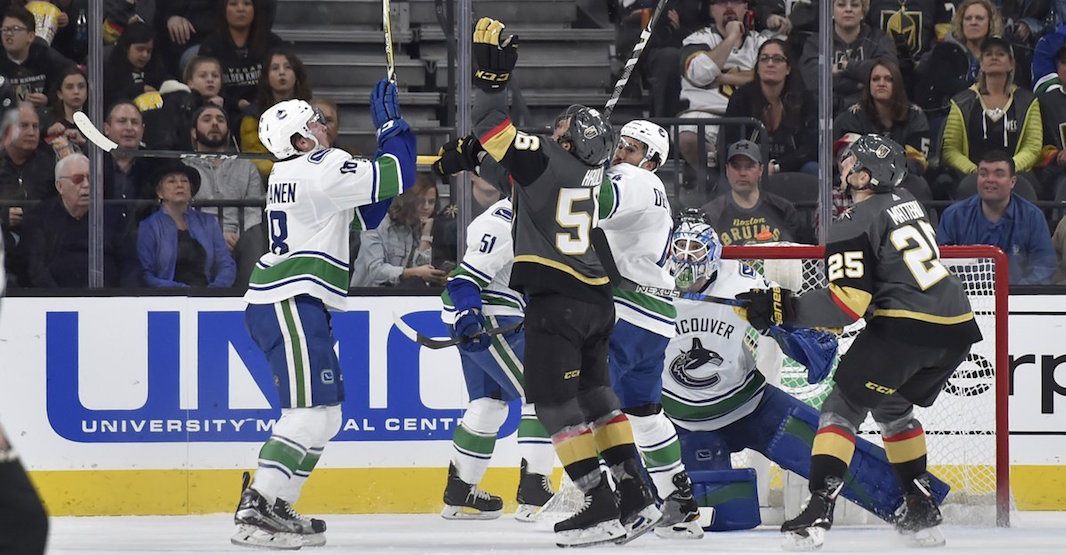 In the first-ever Canucks game in Las Vegas, fans got a glimpse of why the Golden Knights have more home wins than any other NHL team.

The Golden Knights play a fast game, especially on transition. They make their opponents pay for mistakes. They work as hard (or harder) than any other team, and they seem to always have a chip on their shoulder.

Give a lot of credit to head coach Gerard Gallant for what he’s done with that team. They are the best expansion team in NHL history, and it’s not even close.

To the Canucks credit, they played a pretty good game. They kept up in the shot totals, scored three goals and easily could have had a few more. Marc-Andre Fleury was on his game.

It was closer than the 6-3 score would have you believe. The Golden Knights just made a few less mistakes and got better goaltending, which is what it really all came down to.

This game started off well when Sam Gagner showed why he had 50 points last season in Columbus. He’s got some slick puck skills.

After stealing the puck he pulls out a nasty saucer pass and Sven Baertschi makes no mistake to open the scoring.

Who’s got the sauce?

Word on the street Friday morning was that Thomas Vanek would be open to signing in Vancouver again next summer if the Sedins re-sign as well.

Vanek says he’d take another 1 year deal to come back and play with Sedins. But they won’t tell him, either, if they’re staying.

Of course, the plan from GM Jim Benning should be to flip Vanek to a contender for a draft pick.

But if Vanek wants to come back to Vancouver in the summer, why not? He seems to be popular among teammates, and has proven he can play with Brock Boeser and the Sedin twins as well.

He was with the twins on Friday and scored a goal simply by being in the right spot.

That’s a goal Alex Burrows would be proud of.

Remember after the 6-1 win against Boston and everyone was talking about how great the pairing of Alex Edler and Erik Gudbranson was?

Yeah… that was six days ago. Feels like six years.

That pairing got terrorized tonight by the Vegas Golden Knights. Despite the shot attempts being even (61-61), Edler and Gudbranson each had a corsi of -6 on the night.

It was particularly bad for Gudbranson, who was on for all of the first four goals the Canucks allowed.

This one was an especially bad look…

Dating back to last game against Colorado, Gudbranson was on the ice for eight of the first nine goals the Canucks allowed since signing his contract extension.

You can’t make this stuff up. Well at least I can’t, I’m not that creative.

But if you’re a positive guy like Smelmaglov, you can still find silver linings to the situation.

Of course, not all those goals were Gudbranson’s fault. But when you’re on for that many, chances are you’re doing something wrong.

Jake Virtanen will always be a controversial character in Vancouver due to no fault of his own. Better players were drafted after him, and that’s not his fault.

He’s had some growing pains through his first two NHL seasons, but Virtanen is starting to blossom into the kind of player the Canucks need.

He still needs to drive the net more, but he’s using his speed more and more to put himself in advantageous positions.

Virtanen’s only 21 years old. He’s still improving. As the season has gone along, he seems more and more aware of where to go to best use his tools to create offense.

He coasts across the blueline here then accelerates when Baertschi sends the pass, using his speed again to break away from the defenceman and get a quality scoring chance.

Marc-Andre Fleury robbed him of a goal on Friday, but Fleury can’t take away his SixPack Superstar honours.

It was the Canucks first game played in Las Vegas, and the first NHL game for 26-year-old Philip Holm.

Despite his -3 on the scoresheet, I thought he looked promising. Some nerves there for sure, but I’m interested to see how he does moving forward in this season. The Canucks may as well play him, this is a lost season and they need to see what they have in players like Holm.

How about that finish from Daniel on the third Canucks goal?

The nostalgia is real for me on this one – that was a vintage Daniel Sedin snipe.

Fleury didn’t even have time to react.

Even though they lost, this wasn’t a terrible effort from the Canucks. They played pretty well actually.