Canucks games at Rogers Arena are too quiet, and we have ourselves to blame.

Would a better goal song, cheaper tickets and a Stanley Cup contending team help make Rogers Arena louder? Of course it would. But the decibel levels are ridiculously low in the arena and it has been seemingly getting worse year-by-year since 2011.

People complained about the music when DJ Dave was in charge. Now Jay Swing and Marlon J. English are running things and people are still complaining. The music may still be a problem, but it isn’t the problem.

People complain that the real fans can’t afford to go to games anymore. I usually sit in the “cheap” seats and I’m not a rich man. I can tell you it’s quiet there too.

People complain about the product on the ice. In 2011-12 it was the Stanley Cup hangover. In 2012-13 it was the lockout shortened season. In 2013-14 it was boring hockey. Well what’s our excuse this year? Thank goodness we took down that “7th Canuck” banner. 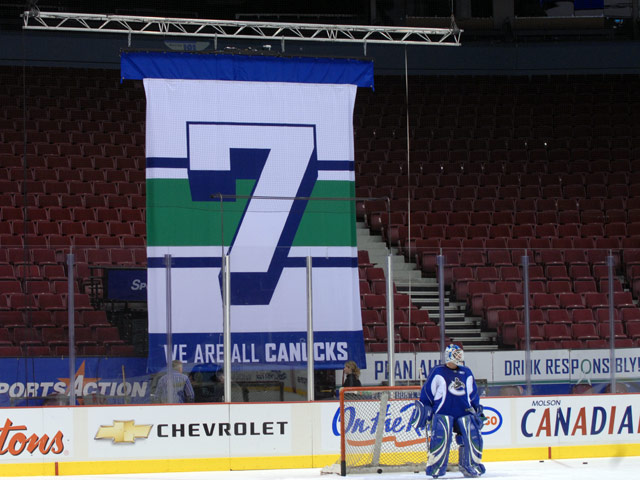 The Canucks are exciting to watch again, there are tickets available for games (though most of the building is still full) and the team is in first place. I know the Stanley Cup isn’t likely to be coming home this year, but there’s a whole lot to be happy about so far this year.

Tuesday’s game hammered the message home to me, thanks to a few Senators fans in my section.

Sens fans completely making fun of how quiet it is at Rogers Arena. There is no comeback. They're right.

When Ottawa is making fun of our fan support, we have a problem.

The Sens aren’t a good team, they missed the playoffs last year and the Canadian Tire Centre isn’t known for being a loud rink. So they don’t really have much to boast about. But these fans were absolutely right.

You could hear a pin drop at Tuesday night’s game in the 1st period. Sure, it was a Tuesday and it was Remembrance Day, so that may have affecting things. But it will be almost as bad on Friday when Arizona comes to town.

The Canucks outplayed the Senators from start to finish on Tuesday. They controlled most of the play and they scored goals, pretty goals. It was also a close game and ended in dramatic fashion. In short, it was pretty much everything you hope for when you go to the rink. But still, the quiet.

Sure, fans made noise at times. We made noise every time a goal was scored (though not everyone stands up for every goal anymore). The place went bananas, as it should, when Daniel Sedin scored a beautiful goal in overtime to win the game. But otherwise? The only time we seemed to get riled up was when Sens fans started to get going.

“Go Canucks Go” was only heard when fans tried to drown out “Go Sens Go”. Nobody jeered opposing goalie Craig Anderson, but I did hear Sens fans chant “Miiiiiiiilllllllerrrrrrr.”

This isn’t an article to praise Sens fans because they’re nothing special. They’re not as numerous or as vocal or obnoxious as Leafs, Habs, Flames or Oilers fans. And that’s kind of the point. If Senators fans can do this in our home rink, what does that say about us? We have become a “show me something and maybe I’ll cheer” crowd instead of a “lets get the boys going” crowd.

We have ourselves to blame and it’s time to turn it around. We need a fan revolution in this city.

Quietness breeds quietness and it’s difficult being the only loud fan in your row or in your section. So it’s not easy.

I’m calling out everyone who will attend a Canucks game this year – be louder. If you hear “Go Canucks Go,” join in. Cheer when someone delivers a bodycheck. Cheer when there’s a shot on net. Cheer when your goalie makes a save. Make noise, lets go. Don’t do it for me, do it because it’s the right thing to do. Do it for the revolution!