It was Grizzlies night at Rogers Arena, so it was nice that one player from Vancouver’s old basketball team showed up for the celebration.

Shareef Abdur-Rahim’s appearance was nice and the Canucks’ kids also showed up. They were the ones who led the 4-1 win over the Flyers.

While the game was quite even between both teams with the Flyers narrowly edging the Canucks in corsi and scoring chances, the finish from Virtanen, Horvat and Hansen (yes, Hansen) made all the difference.

All smiles tonight. Jake's parents, grandparents and friends were in the building for his first NHL goal. pic.twitter.com/6N2YIaKc1C

The new “Big Country”, Jake Virtanen, scored his first goal, which was a nice tribute to the Grizz… scratch that, a tribute would be showing up out of shape and unmotivated and leading his team to a third period collapse.

INSTEAD, he played a hell of a game and was recognized for it.

1. The McCann and Virtanen announcement

By now, you’ve all heard how the Canucks told Virtanen and McCann they had made the team on Sunday.

There was some award-worthy acting from Willie, Horvat and Burrows.

Willie: “I get lots on our young guys – well why don’t you play them more? Well if I’m going to play you, you’ve got to do your jobs.”

Horvat: “It doesn’t look like you guys are doing the little things to me.”

A few players spoke about the “announcement ceremony” with the media yesterday and there were some funny comments.

“One of the clips that was pretty funny was Ekman-Larsson hitting me from behind. Willie said I have to get off faster. I actually kind of laughed in my mind and thought maybe I’ll go talk to him after – that actually kind of hurt.”

“I think Willie was the best at playing it off. He looked us straight in the eyes and was giving it to us. Personally, I was like, wow, this could be the day I’m heading out to Calgary pretty soon. Then Bo stood up and said, ‘Welcome to the NHL, boys,’ and the room kind of erupted.”

“Bo said he went through about two clips, I had about 13, so I figured from there I was definitely going to go home.”

“It was tough to keep a straight face and take it seriously. I was trying not to laugh.”

“I kind of knew about it beforehand, so I knew it was going to go down, but a lot of the guys didn’t know what was going on, why he was ripping them apart. It was a little more harsh than what he did to me last year, but for me to be a part of it and to tell them they were staying was pretty special.”

“McCann has really brought a lot of skill to our lineup, and Jake, just the energy he brings – he can skate and move and get hits, so they can help us a lot. They’re going to get better and better too so it’s going to be a lot of fun to follow them.”

We’ve given tons of time to talking about the kids’ ice time so far this season. Trevor Linden was asked if he talks to Desjardins about it before the game on the radio.

“We talk daily. We assess what happened the night before and what his thought process was. I think every coach wants to feel some level of comfort when they’re in a tight spot… We’ve seen him grow some confidence in the young players and I think that’s going to continue.

“The thing about it is, they’ve given him no reason to not have confidence. They’ve applied themselves well defensively. I think Willie is seeing we’re a better team with them.”

If you look at the ice time, it looks like Desjardins might be seeing it. Against the Flyers, Virtanen played nearly 11 minutes, Baertschi nearly 13, and McCann nearly 14.

Both Virtanen and McCann were at the top of the corsi charts, and Virtanen was driving the puck to the net all night. He eventually scored his first goal of the year on his fourth or fifth net-crashing play.

Virtanen: “I think Burr was pretty excited. He hit me in the head, I almost thought I had a concussion.”

I’m rarely a fan of using scratching a player to send a message – too often it takes away ice time and crushes the confidence of someone who needs it most. But in Sven Baertschi’s case, it made sense.

He’s a player who has tons of skill and vision. All he was missing was the determination to fight for the puck every time it was near him.

There are many who think Baertschi hadn’t been given a real chance before Tuesday’s game, but how you could get more of a chance than starting the year on the second line beside the team’s golden child (Horvat), and being gifted a spot on the second power play unit? Most of the time he was benched by the third period, but you can’t say he didn’t have a chance.

Baertschi looked like he was motivated to stay in the lineup Monday. Guess knowing Chris Higgins is sitting in the press box waiting for you to play soft so he can get in will make that happen.

Here’s Baertschi putting his body on the line.

And here he is making the first pass that set up Hansen’s goal.

3. Horvat did his part

Horvat and his linemates Baertschi and Hansen ended the night at the basement of the corsi stats, while scoring two key goals on the way to the win.

He even scored a goal that had Sportsnet’s Corey Hirsch saying he has a reach like Mario Lemieux.

@omarcanuck “Horvat reminded me of a young Mike Bibby on that play.” “….what the hell are you talking about, Corey?”

Am I the only one that think Corey hirsch looks like mr Rooney? #Canucks @Sportsnet @sportsnetmurph pic.twitter.com/fBC8RbhXto

In his 700th game, Alex Burrows didn’t score any points, but he had a typical Burrows game – he drove the net hard, gave the opposing team fits, nearly scored many times, and ended the night on the right end of the corsi numbers (he was plus-4 ES).

He and his linemates had one shift where two of them crashed into and landed on Flyers’ goalie Steve Mason. Pretty sure Ryan Miller was watching from the other end giving thanks he wasn’t on the receiving end of that.

Linden, asked about Burrows before the game:

“First time I saw Burrows was in the dressing room in St. Louis. I saw a scrawny kid who could barely speak English and I was like, ‘How is he going to help us?’ I remember sitting on the bench and after two periods thinking, ‘This kid is really smart.'”

Burr spoke about hitting the 700 game milestone with Sportsnet’s Irfaan Gaffar between periods:

“It means I’m pretty old now. No, I’ve had so much support from the fans, my teammates, everyone along the way. I’m really happy, hopefully many more to come.”

5. We are all… missing Sbisa

Which makes it harder to put posts like these together.

Sportsnet’s John Garrett, who named Sbisa first star after Friday’s game, had a funny take on him during the game:

“I like Luca Sbisa because he’s unpredictable,” he said.

How is being unpredictable a good thing? #canucks #sbisa #sportsnet

@omarcanuck @taj1944 I like him because he’s out of the lineup.

This was a good take too.

This is by far sbisa’s best game with the #Canucks

6. Shareef has no idea

Kind of looked like Shareef Abdur-Rahim had never watched a ceremonial faceoff before.

Here he was looking at the puck.

@omarcanuck upon looking at it – “what is this peculiar-looking disc-shaped thing?”

Here he was realizing it was time to walk out and drop the puck. 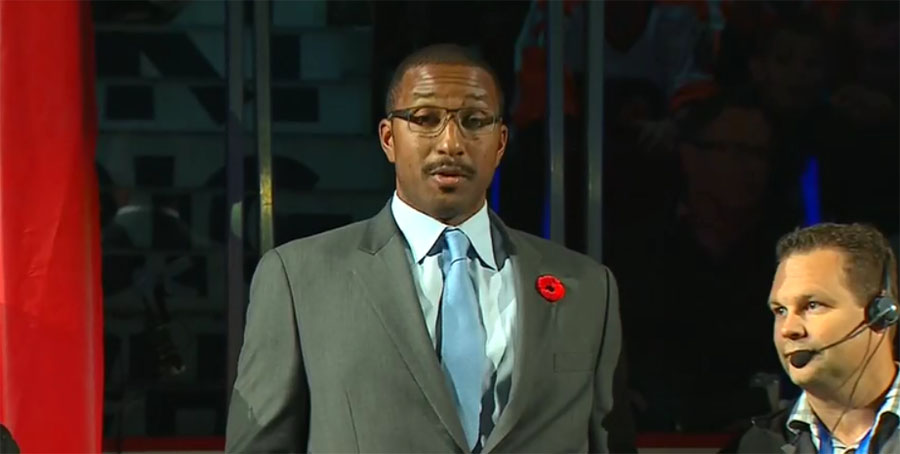 And here he was finally and awkwardly dropping it.

The @VanCanucks paid tribute to the NBA’s Vancouver Grizzlies, who played 6 seasons in Vancouver from 1995 to 2001. pic.twitter.com/zmfOswYO52

Note: Thanks very much to Ryan Biech for his help with the gifs tonight. If you’re interested in Canucks’ prospects, make sure you follow him: @ryanbiech