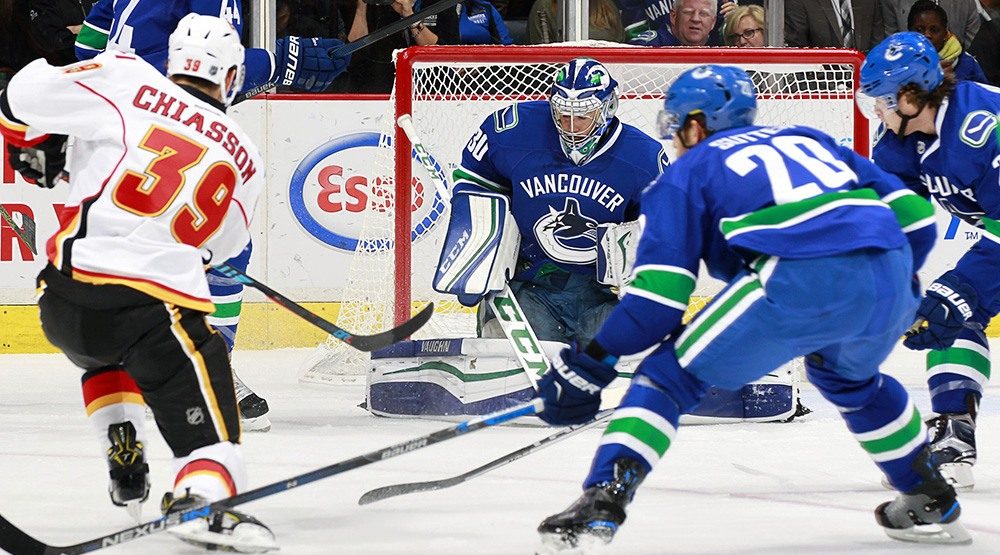 Canucks season is here, which means we can stop talking about the pre-season and practice line combinations (which were head scratchers), and how low the expectations of this team should be (USA Today predicted a 65 point season).

Now we can pick apart game line combinations (which were head scratchers), and how the Canucks are Stanley Cup bound.

Fine, Vancouver doesn’t have a roster full of young, creative, fast players like Edmonton and Toronto, but most Canucks fans seem to be more optimistic than Jocelyn and Brandyn.

Then Vancouver’s newest addition, Loui Eriksson, scored on his own net on a Flames delayed penalty.

Loui Eriksson misses Gudbranson and scores on the delayed call – Kulak given credit for the goal #Canucks #Flames pic.twitter.com/eJzpkebapE

Eriksson passes the puck back, Daniel Sedin doesn’t notice it and it goes right past him and as it’s going towards the empty net, Erik Gudbranson skates after it, dives, and doesn’t get close to stopping it.

With Calgary up 1-0 and Vancouver looking pretty underwhelming through most of the third period, USA Today’s prediction was looking more realistic.

But the Sedins had a vintage shift and tied it up, leading to a Brandon Sutter shootout goal that sealed the 2-1 win.

To be honest, it wasn’t a vintage night for the Sedins. Instead of putting on the usual clinic we’re used to seeing from them when they play the Alberta teams, they looked like they were… 36.

Scary thing is their new linemate, Loui Eriksson, who’s 31 and just signed a six-year contract with Vancouver, didn’t look much younger than them.

Midway through the third period, after a Canucks penalty kill, Jannik Hansen jumped on the ice with the Sedins, and Vancouver had one of their best scoring chances of the game as he set Daniel up for a nice shot.

It was a strong reminder of how a fast, grinding winger with some skill (like 2011 Burrows) can help them retrieve pucks and compliment their style of play.

Not sure that’s Eriksson.

The Sweden line did, however, have one hell of a shift that led to the tying goal near the end of the game. Playing with the number one defensive pair, Alex Edler and Chris Tanev, the Canucks pinned the Flames in their end and looked like they were on a power play.

I’ll let Jeff Paterson’s tweet create the image for you.

#canucks Sedin’s out for 2:01 before scoring. All in Flames zone

It was that good, yeah.

Cliches are lame, but…

If it ain’t broke, don’t sign a $6M winger to break up your best scoring line.

If it ain’t broke, don’t break up the two players who had the most chemistry down the stretch.

By now you probably heard about the commotion the Canucks season-starting line combinations caused.

Most of the angst was caused by Horvat being thrown onto the team’s “fourth line” with Alex Burrows and Derek Dorsett.

By the end of the game, despite taking mostly defensive zone starts, Horvat’s line had the best shot attempt differential of all the lines.

More startling: Markus Granlund took 100% of his draws in the offensive zone yet he was on the ice for six shot attempts against, while Horvat allowed three.

The forwards looked uncreative and fairly slow for most of the game.

Had an amazing gif of a diving Gudbranson backcheck that stopped Michael Ferland from scoring.

Unfortunately, seconds after, Gudbranson was chasing Eriksson’s pass into his own net.

Nothing he could’ve done about that. On a team that was desperate for more depth at defence, Gudbranson looked solid.

Benning spoke about Virtanen on the radio Thursday: “He’s gotta play his game. That’s the speed game, getting in on the forecheck and being disruptive, and he’s a guy that can shoot the puck and he’s going to have to score.”

Not leaving much room for error there.

Virtanen did have one point blank scoring chance off a giveaway in the third period, but he missed the net. It could be a costly miss too – that goal would’ve been a good argument against taking him out of the lineup.

5. Time to get on the same page

In case you missed it, on Thursday, Trevor Linden told the Vancouver Sun, “The challenge I have is there was this notion that this would be flipped around quickly.”

Funny thing is the “challenge” came from the man who’s in charge of building his team – Jim Benning. 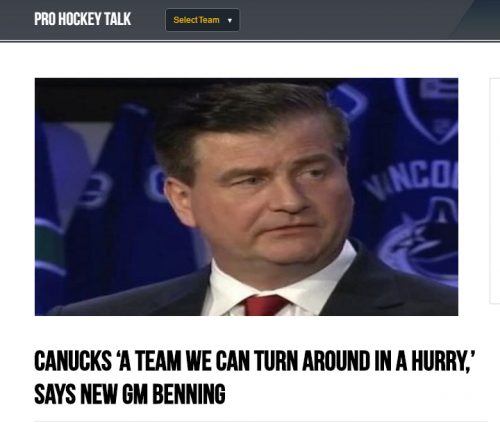 In this PHT article, Benning said: “I like the team, I like the core players … The Sedins are excellent people and great players, so I think this is a team we can turn around in a hurry.”

With all the experts piling on the Canucks’ hopes this season, Sportsnet didn’t pass up the opportunity. At least not in the magazine version of their Hockey Pool Guide.

Here are a couple of pictures from it: 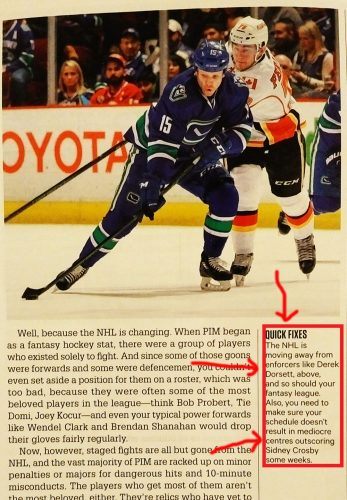 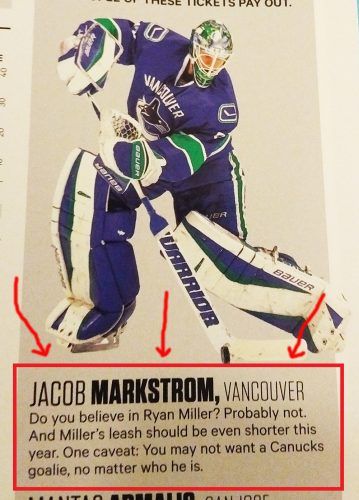 Don’t believe in Miller? He just allowed zero goals and was first star in the Canucks first game of the season.

Could’ve seen it coming too – goaltending was one of the few bright spots on a pretty horrible Canucks team last season.