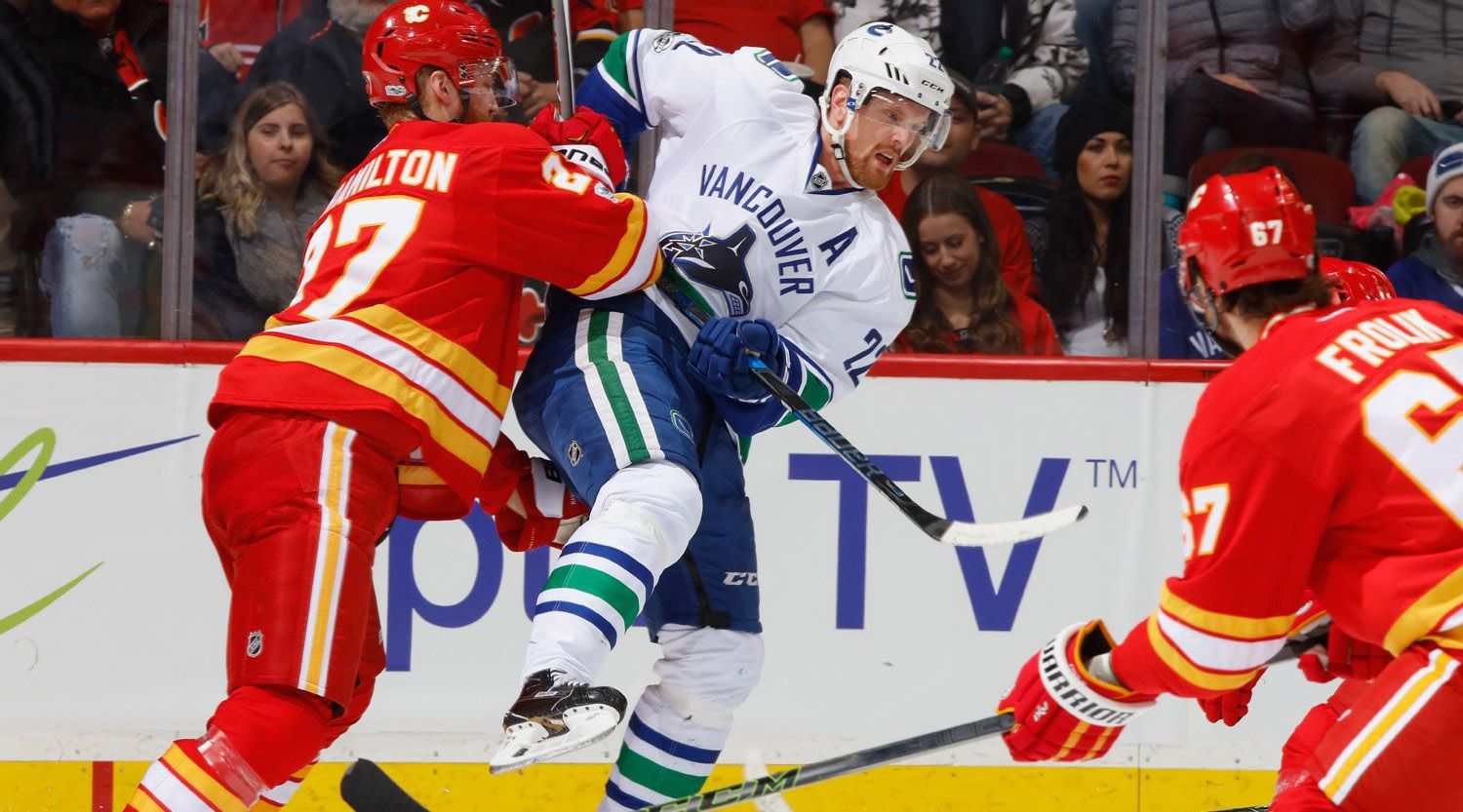 Let’s be real, Vancouver never had a chance on Saturday.

Start with the fact they just barely managed wins against the league’s two worst teams, add that they deserved to win Friday’s game against Calgary as much as Vancouverites deserve a medal for how they’ve handled winter – you know they had this loss coming.

Actually, I can do better than that.

When Tryamkin was injured 11 minutes into the first period and they were down to four defencemen, then Sbisa was hit and sat out a shift, and they didn’t drop a forward to D, that is when it was over.

The Flames scored two goals during the time Tryamkin was out, and they never looked back, eventually winning 3-1.

But this is important: Vancouver didn’t fold.

They didn’t give up and throw in the towel, though when the Flames scored two goals, it looked like they should.

They kept trying. By the end of the game, even strength shot attempts were 50-44 Vancouver. That is an incredible effort from a team down to five defencemen, without Tanev, on the second half of a back-to-back.

By the end of the game, it was an incredible effort wasted.

They could’ve dropped a forward to D. They could’ve let Rodin, the guy who led the Swedish league in scoring last year, on the ice to spark some offence. That didn’t happen. Somehow Rodin didn’t play a single shift in the game.

How did it come to this?

Tanev was injured Friday, and he didn’t make the trip. Minutes before the game started, we heard Ben Hutton wouldn’t go because he took a shot off his hand Friday, and they’d be dressing five defencemen.

Those defencemen included rookies Stecher and Tryamkin, AHLer Biega, the guy they hope’ll be picked up in the expansion draft – Luca Sbisa, and one reliable NHL defenceman in Edler.

Are you starting to see why a win was a long shot?

After the game, Willie said they thought Tanev might play and they didn’t know Hutton’s status until the pre-game skate – and they “just got caught.”

Truth is, with the status of two defencemen up in the air, they only called one up. That’s a massive error that cost them a chance at two points, when they’re scratching and clawing for every one they can get.

Point is, if fans are sour at management and coaching after this loss, they have good reason.

I have to tell you, though: it was one of the most interesting games of the season to watch.

Rodin’s playing time read 0:00 after the game, yet somehow he’s number one in the SixPack.

The story was that big a deal. Everyone was talking about it.

Is he injured? Why bother dressing him if that’s the case? Why embarrass a player by making him sit on the bench the entire game? When was the last time this even happened?

FYI, it hasn’t happened this season.

There hasn’t been a player in the NHL this season to dress and not play. Rodin has 0:00 tonight.

After the game, Willie was asked why Rodin didn’t play. His answer (paraphrased):

Like… why not just put Rodin out on the 2nd PP unit?

Think Ryan makes a good point? Realize Megna plays on the second power play unit and his suggestion almost turns into a no-brainer.

To recap the Rodin sitution:

Vancouver was down to four defencemen for a seven minute stretch, their fourth line of Gaunce-Chaput-Skille had a team worst shot attempt differential of minus-3, Megna, a non-offensively gifted fourth liner plays on the power play… yet Rodin couldn’t get one shift.

Has your head exploded yet?

2. Where they lost it

I’ll show Calgary’s goals, but as I said before, this is where they lost the game.

When Ferland hit Tryamkin and he had to go to the dressing room, it was over. This is what happened.

Strangely enough, Tryamkin has become a difference maker for this team. Shot attempts with him on the ice Saturday were 23 for and 13 against. That’s a differential of plus-10. It led the Canucks and it was three more than anyone else on the team.

It’s a huge positive, though it likely won’t be seen that way.

After suffering through Sutter with the Sedins and even worse – Megna with the Sedins – the Canucks started the game with Loui Eriksson playing with the twins. It felt to me like half the people out there didn’t even realize it was happening, with all the crap going on with Rodin and the defensive core.

if they lose, the megna line is back on, isn’t it

Sadly, Botch may be right. They didn’t score, the Canucks lost, and I’m not sure Willie makes decisions on more than these types of facts.

But here’s something very important: they were the Canucks best forward line by a margin. With all three on the ice, they had 14 shot attempts for and 7 against for a plus-7 differential.

Next up was predictably the Bo-Baertschi-Burrows line at plus-5.

That is a massive deal, considering the Sedins have struggled to be in the positive playing with Sutter and Megna.

The combination made Eriksson and the twins – three players who have been coached into submission – the most potent forwards on the team again.

Really, if they’re broken up after this game, this is the only solution that makes sense.

Like America, the Sedins can be made great again… if Willie allows it.

Yes, it was such a crazy game that Jacob Markstrom’s heroics got left until now. He was great and he deserved the win too, make no mistake.

Here’s one of many heroic saves caught by gif artist Ryan Biech.

“He’s right on par where I would’ve expected him to be right now to the point where he’s ready to take over. The Canucks did a good job of that by bringing in Ryan Miller and kind of mentoring him and giving him that opportunity.

“I think he’s more than ready to take over the number one job. Does Ryan Miller get moved at the deadline? I mean that’s something that could happen, but word to the wise – I was the guy that got let go in St. Louis when we brought Ryan Miller in, so it’s tough for a guy to come in for six weeks and do something.”

Okay… the fact Hirsch thinks Miller could be moved at the deadline shows he’s sort of out of the loop on what’s going on in Vancouver. This management group is not moving Miller and they’ve even talked about possibly re-signing him this summer.

Still, hearing Markstrom’s ready from a former goalie is notable.

Another former goalie, Kelly Hrudey, weighed in just before the game.

“A couple times I’ve mentioned on the air this year, why aren’t they going to Markstrom more often? I think he’s at that age where he’s taking some steps ahead.

“Then I’m thinking, no, you know what? Ryan Miller’s doing his job in that he’s forcing Markstrom to continue to raise his level of play. That’s what that internal competition does.”

Don’t know about Hrudey’s take. If Markstrom raises his level of play, what’s his reward? The answer is nothing. He gets the second half of back-to-backs, no matter what.

See, if the Canucks aren’t ready to make that jump to Markstrom as starter this summer, it’ll be because they don’t think Markstrom played enough this year to show he can handle a starter’s role.

So they really should consider this.

Not sure you can say one has been better than the other. Should be alternating starts

Another no-brainer for the coach.

Newest Canuck, Reid Boucher, spoke with TSN 1040 yesterday, and I found his thoughts on the Canucks’ system interesting.

“It’s a simple game. There’s not a lot of moving parts, if I could put it that way. It’s a north hockey game. It’s get the puck in.

I don’t know about you, but I’m kind of wishing the Canucks played a system that forced them to make plays.

More creativity, especially on the power play, would help this team be less predictable and score more goals.

I’m sure many of you will argue the Canucks roster doesn’t have the talent to be more creative, but to me you’re selling short the Sedins, Baertschi, Eriksson, Horvat and even Burrows with that thinking. All have shown they are creative players this year.

The Sedins playing with Eriksson on Saturday cemented that.

Care for more insight into the Canucks system, and why it’s so hard to watch so many of their games?

According to the chart, they’re the lowest event team in hockey, meaning fewest shots for and against per game, on average.

This explains two things nicely: why the system’s so easy for Boucher to pick up, and why Rogers Arena doesn’t sell out like it used to.

Look, Canucks management has made a lot of mistakes, and the direction they’ve taken this team in is questionable at best.

Before you give up hope, though, this guy could make it all OK.

Now imagine management places the emphasis on building for next season and beyond, rather than this season… They could move Tanev or Edler for more forward help, Miller for draft picks/prospects, Burrows for…

I could go on. The possibilities to turn this team into something half decent are there for the taking if they can commit to it.

Really sounds like it’ll take a different management group, though.

He did it again on Saturday.

I have a feeling wiener dog dad’s starting to realize his little guy fleeced him on the bet when he got to choose the leading scorer on the team.

Note: Thanks to the often replicated never duplicated gif-master Ryan Biech for his help with this