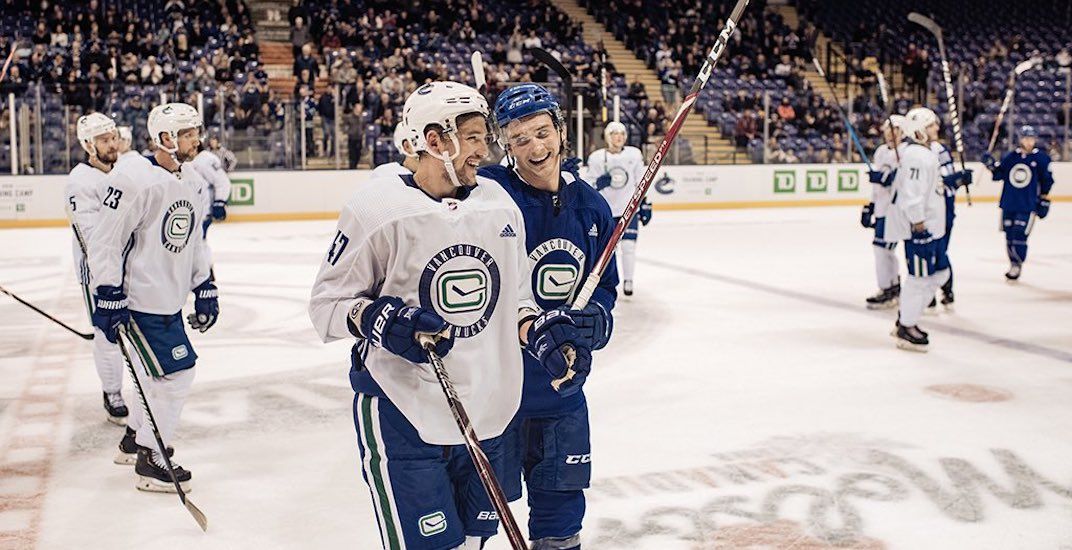 The puck drops on the NHL preseason for the Vancouver Canucks tonight.

They’ll play not one, but two games, against a pair of Calgary Flames split squads.

After hosting training camp the past three days, Victoria will be the site of the Canucks’ home game, which is where most of Vancouver’s top players will play. That game begins at 7 pm PT and can be seen on Sportsnet.

An undermanned squad will travel to Calgary, to take on the Flames at the Scotiabank Saddledome at 6 pm PT — with Sven Baertschi, Tyler Motte, Tim Schaller, Jay Beagle, Jake Virtanen, Troy Stecher, Alex Biega, and Oscar Fantenberg the only NHL regulars in the lineup.

The game in Calgary will be broadcasted via live stream on Canucks.com at 6 pm PT. Here are the lines and defence pairings for that one:

This group skated already and is en route to Calgary. ✈️ pic.twitter.com/tDKXfFSlYc

They’ll have their hands full against this lineup for the Flames:

#Flames projected lines and pairings for home game vs. #Canucks:

Fans at the Save-On-Foods Memorial Centre in Victoria should be treated to a better show (as much as you can expect in the first preseason game), with a more representative lineup expected for the Canucks.

Elias Pettersson will sit out, though Bo Horvat will play. Victoria native Jordie Benn will make his Canucks preseason debut.

This group is currently on the ice and will face the Flames at the Save-On-Foods Memorial Centre in Victoria.

Here’s how the Flames’ lineup will look in Victoria:

#Flames split-squad going to Victoria tonight looks like this:

It’s going to be a busy week for the Canucks, as they play five games in the next six days. They’ll play three more times next week, including a game in Abbotsford, before the regular season begins on October 2.