Fans weren’t celebrating in the streets when Jim Benning said he was in wait and see mode four days ago.

Asked what he’s going to do with Radim Vrbata and Dan Hamhuis with the trade deadline approaching, Benning said:

Since he said this on Tuesday, Vancouver lost 2-1 to Columbus and Saturday’s 4-1 game to Calgary – to two of the worst teams in the NHL.

This team’s all about answering fans’ prayers right now.

Can we go back to the #ChangeIsComing slogan? We arent really #PlayingForAnything but to lose. #Canucks

No way Benning looks at a team that’s scored three goals in three games, lost five of its last six games, is losing despite being healthy, and thinks they’re going to make the playoffs, is there?

The players weren’t the only Canucks employees having problems Saturday night.

People are not happy pic.twitter.com/BetzD0upTJ

At least fans had something to cheer for.

Word is that may be the last time the screens are used.

For what it’s worth, Vancouver outplayed the Flames in terms of possession and zone time. 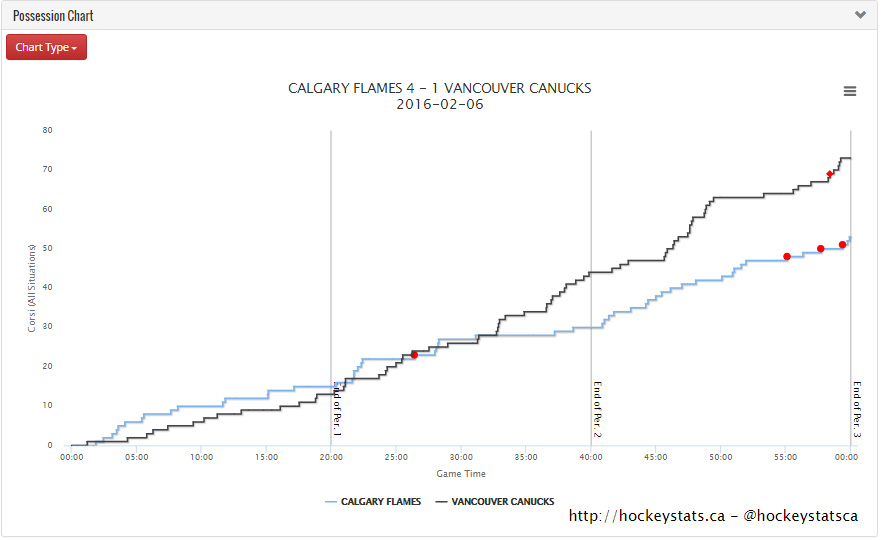 So why didn’t they win? Hank’s answer:

Henrik says it felt like last year’s playoffs. Lots of possession, but too much on the outside.

It’s hard to remember too many glorious scoring chances from Vancouver.

Henrik nearly scored from a horrible angle on the power play in the second, and Emerson Etem nearly scored on this McDavid-like rush.

Etem scored just before the game expired off a nice pass from Vey, and their line deserved it for the way they’ve played the last two games.

But Vancouver scored one goal despite only having three players with negative corsi numbers. Yeah, it felt like the playoffs again. Or 1998.

Sbisa makes it too easy to jump on him sometimes. Early in the first period, Hamhuis thought he’d make a smart pass back to his partner…

Obviously it didn’t work out so well.

Later in the period, though, Sbisa stuck up for the Sedins after Ferland took a run at them.

Well, first Dorsett had his version of sticking up:

Dorsett, you’re supposed to fight, not stick your knee and arm out…

But Sbisa did the respectable thing and dropped his gloves despite not being particularly good with them off.

Sorry about the low quality of that gif, but I wanted to make sure you saw Sbisa’s one attempted punch, followed by his getting pummelled and eventually grabbing on for mercy.

Wyatt giffed it from another angle:

Look, we bag on Sbisa quite a bit here, but honestly, he’s a good team guy who only wants to help.

That said, I’m sure a lot of you want to help too, and you’re not on the roster.

Global news did a great feature on Hamhuis’ injury.

A couple of stomach-churning pictures of the damage that puck did to his upper jaw: 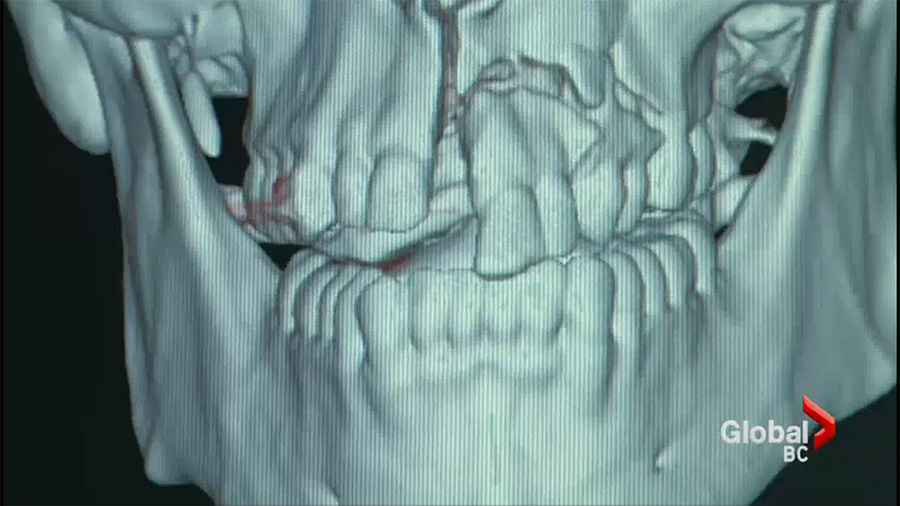 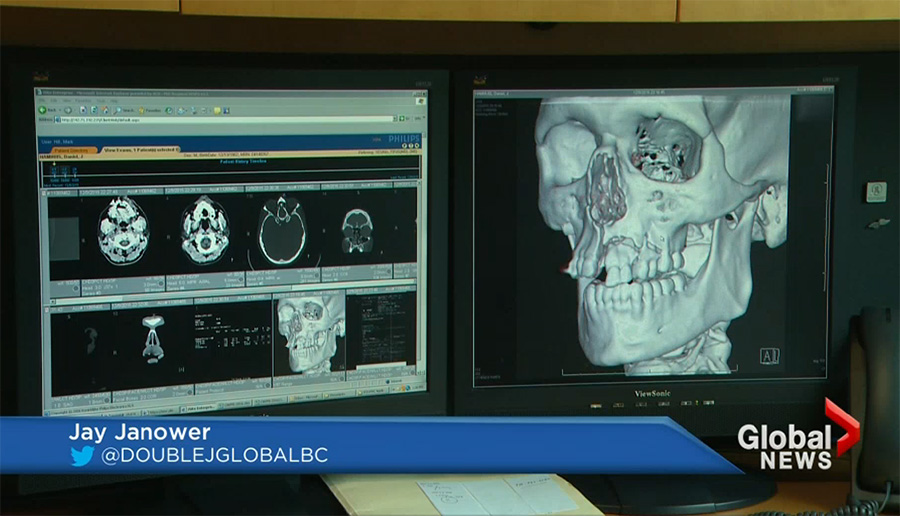 Dr. Peter Lennox, the plastic surgeon who fixed Hamhuis up:

“His palate was just broken into a whole bunch of peices and I didn’t count the fractures. We didn’t want to look at the palate, I just wanted to hold it in place and let it heal that way.

And then his alviolis, which is the part of your gum, the bony part of your jaw that holds your teeth, that was shattered sort of from his incisor all the way past his canine and sort of pushed up. Two of the teeth were still there, and the third tooth, nobody ever found.”

Hamhuis on what he went through:

This injury was unique to any other injury I’ve had, and I’ve had a few bad ones. I broke my leg when I was a kid in minor hockey, I’ve had some concussions, and I tore a muscle last year, but nothing compared to this.

This was one where for the first ten days I wasn’t thinking about hockey. I was thinking about family and life. Just the trauma of the injury was so different.”

At the end of his first game back after missing 21, Hamhuis was plus-10 in corsi, behind only Edler and Tanev.

Fans would be happy he’s back, right?

@omarcanuck Draft pick(s) and then sign him for the hometown discount July 1st?

The last one may not be the most ridiculous idea. One of the TSN 1040 guys reported this week that Hamhuis would take a pay cut to stay in Vancouver.

@omarcanuck yeah I just feel JB wouldn’t bring him back seems like yo shrewd of a move for him….

I think Taylor meant “too shrewd”.

He makes a good point – Benning and shrewd go together like vegans and food that tastes good.

Tweeted this poll question before the game:

Which #Canucks line do you think Willie should use most defensively?

You got your wish on the Sedins, as they led the team with almost 90 percent of the offensive zone starts.

That’s where it stopped though. The second-most offensively utilized line was Sutter’s at ~60 percent – so much for him taking the pressure off Horvat.

The line that got the most defensive starts was Etem-Vey-Burrows.

Despite this, Vey’s line was second best (behind the Sedins) in terms of driving play offensively and they scored Vancouver’s only goal.

6. Getting in Willie’s head

With the Canucks scoring two goals in the two games leading into Saturday’s game and none in the first two periods, did Willie think of changing things up at all?

Willie says he was “writing down different combinations,” but ultimately decided to stick with the lines.

Personally, I’m impressed he even considered it.

But this is also why Willie is not the guy who should be in charge once change has finally come in Vancouver.

There was some good stuff from Kurtenblog radio earlier Saturday.

They talked about some stories they heard while in Nashville for the All Star Game. Of interest to Canucks fans – one prominent NHL reporter is convinced the Canucks will take a run at Steven Stamkos this summer, they said.

With Elliotte Friedman mentioning this on HNIC a few weeks ago, I have a feeling it’s his rumour. I mentioned it in the SixPack when he said it too, because Friedman wouldn’t have dropped that unless it was coming from somewhere.

So let that thought keep you warm at night, Canucks fans. And if that doesn’t work…