I’d love to say February’s off to a wonderful start, but… Seahawks… and Canucks vs. Wild.

Yeah… I’m an optimist and I really really want to tell you the month can only get better from here, but the schedule is literally right below and I can’t lie about it. Getting wins here looks like it’ll be tough. Like explaining why Lynch didn’t run the ball tough.

The Canucks play 14 games in 28 days in February. If you include March, they will play 30 games in 59 days. This stretch will make or break the season.

The opposition this month?

Only four of the remaining 13 February games are against teams lower in the standings – two against the Wild (who are hot on Vancouver’s tail), one against New Jersey, and one right at the end of the month against Buffalo.

On the other side, Vancouver will face Chicago, Boston twice, the New York Rangers, San Jose, Pittsburgh, and the New York Islanders.

I don’t know what else to turn to, but I’m guessing some of you have birthdays coming up. If you can use those wishes for the following, we’d all really appreciate it.

– Wish that Daniel Sedin, sparked by his Sunday goal against the Wild, regains his goal-scoring touch.

– Wish that Nick “the sleeping sniper” Bonino, who has scored 2 goals in 10 games, takes the “sleeping” out of his new nickname.

– Wish that the Canucks get goaltending that wins them many (ok, a few?) games over this stretch. (Can they at least give Eddie a shot, here?)

– Finally, please wish that the Canucks have a power play again. I’m not saying they have to score on every one, or even half the time. Just that it’s not a waste of 2 minutes every time it happens.

Please make sure you don’t tell anyone about your wishes, or they won’t come true. If you do this Canucks fans – we have tons of reasons to be optimistic.

Here’s Dave Lee-son’s February wallpaper, with its bad-ass design. Click on the link below the image to download the high resolution zip file. 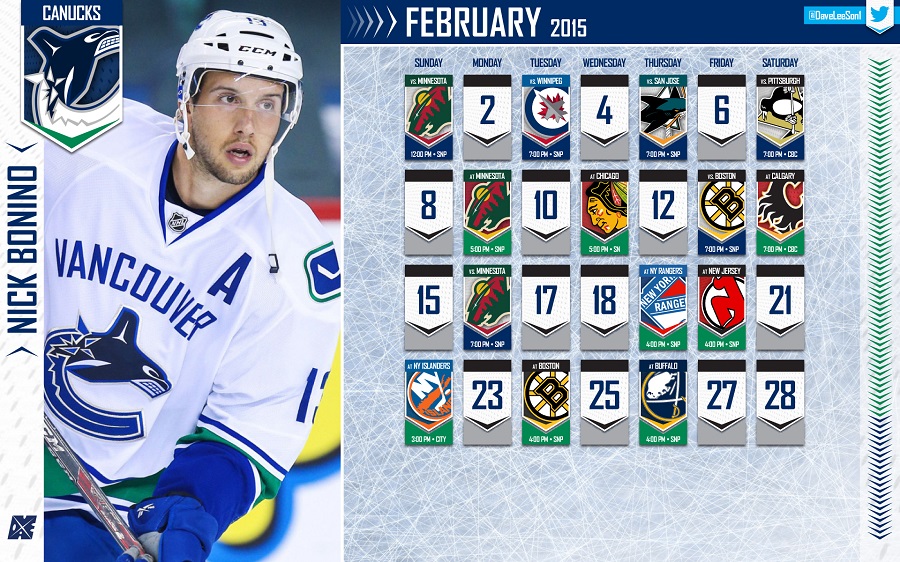