When it comes to ways of how to generate noise at Rogers Arena, Canucks fans aren’t usually short on ideas.

At Tuesday night’s Town Hall meeting for season ticket holders, one fan asked Canucks management if they would consider implementing a supporters section for home games, similar to what the Whitecaps have at BC Place.

Some fan wants a #Whitecaps atmosphere at games and fans are cheering for that too… did they serve beer at this thing? #Canucks

It’s no secret that the once raucous arena has the atmosphere of a library nowadays. The team has tried a multitude of different things to help improve this (improving the music, pre-game intros, etc.) but the effect in the stands has been minimal. Having a better team on the ice would help, of course, but fans sat on their hands last season despite the Canucks racking up 101 points and home ice advantage in the first round of the playoffs.

Would a Southsiders-style supporters section work for Canucks games at Rogers Arena?

The Canucks are looking into it.

“Some of our fans have told us they’d embrace the idea of creating a special section in Rogers Arena where they can potentially stand, cheer, and show their passion in greater ways” Canucks Chief Operating Officer Victor deBonis told Vancity Buzz. “It’s definitely something we’re interested in and we’re exploring ideas about what we could possibly do in the coming years.”

The supporter culture at Whitecaps games has spawned the best atmosphere in the city. If the Canucks could capture even a fraction of that kind of energy, it would greatly improve the vibe for hockey games.

When Mark Dailey isn’t writing about soccer from the press box for Vancity Buzz, he’s sitting in the supporters section at Whitecaps games. He was a been a member of the Southsiders or Curva Collective for four seasons.

“The fan experience at Canucks and Whitecaps games is vastly different” Mark says. “At Rogers Arena I feel like a spectator and unless it’s an especially intense game I don’t feel that much more involved than watching at home. Of course, it’s cool to be at the rink watching a live NHL hockey game, but the atmosphere is not the reason I go to a Canucks game. When it comes to the Whitecaps the atmosphere in stadium is part of the fun of being there.”

Canucks games haven’t always been this way, of course. During the Markus Naslund-Todd Bertuzzi era, Vancouver had a very loud arena. That extended until the Canucks’ run in 2011, but the atmosphere has been dying a slow death ever since.

“A supporters section at a Canucks game would be quite the paradigm shift for most Vancouver hockey fans, and would take time to take root” Mark says. “If it can’t grow and evolve on it’s own, then it would have almost a manufactured feel to it and that wouldn’t be attractive for many people.”

That’s something that Canucks management would have to keep in mind if they try this. They would have to relinquish some control over the environment for it to have a chance of working.

Chris Withers has been a Canucks fan since as long as he can remember. He has also been a Whitecaps season ticket holder and Southsiders member since their inaugural MLS season in 2011.

“The Whitecaps fan experience is far more organic than the Canucks” Chris says.

Chris is probably typical of a lot of fans that make a lot of noise during soccer games, but are more subdued at hockey games.

“Being amongst a group of like-minded supporters normalizes that behaviour, so I don’t make any more of a fool of myself than usual. That same normalization makes it easier for a section of more passive fans to join in on corner kicks or other big moments. It’s a feedback loop, and it’s growing.”

That right there, is the biggest argument for having a dedicated supporters section in my mind. Everyone always thinks of the loudmouth fans when it comes to this topic, but really what a supporters section achieves is getting passive fans to make noise without fear of embarrassment.

Chris offers a unique perspective, because he was part of a group of Southsiders that attended a Canucks game in February of 2013.

So much fun having @Southsiders at the #Canucks game tonight. Chant on! @VanCanucks pic.twitter.com/jVWrczzs

“There was no middle ground that day, people either loved us or hated us. I think mostly they loved us, except for the people nearby that wanted us to shut up.”

Security, likely caught off-guard by the situation, tried to curtail their behaviour. “We were in the last 2-3 rows of the arena, blocking nobody’s view, but security came over anyways and told us we couldn’t stand up. That’s when people got kicked out.”

#Canucks game with surprise guests the Southsiders. Chant of the night "we miss Rypien , we do!" #NHL pic.twitter.com/XMNJl72a

I was sitting a couple of sections over from the Southsiders that night and remember it well. They tried a few songs like they would sing at Whitecaps games and also started a few chants like you’ll never beat Luongo and Jan-nik Han-sen *clapclapclapclapclap*.

Despite the mixed reactions to the Southsiders that day, Chris thinks a Canucks supporters group could eventually work.

“Ticket prices, the way the game is presented now with music blaring and sponsor activations in every break, trying to fit such a group into an existing culture, these are all big obstacles. Still, it works at hockey games in Europe, so with effort and patience I don’t see why it couldn’t work here.”

We actually don’t have to even go as far as Europe to find examples of soccer-style supporters groups at hockey games.

Probably the most successful group in the NHL is Cellblock 303 in Nashville.

They don’t sing songs like soccer fans do, and their chants aren’t necessarily the most elaborate.

After Predators goal during “Gold On The Ceiling,”:

Still, the Predators have a great home ice atmosphere, in part because of the rowdy fans in Cellblock 303.

They’ve tried out a supporters section in Ottawa, called Sens Supporter Section 312, which has been successful. 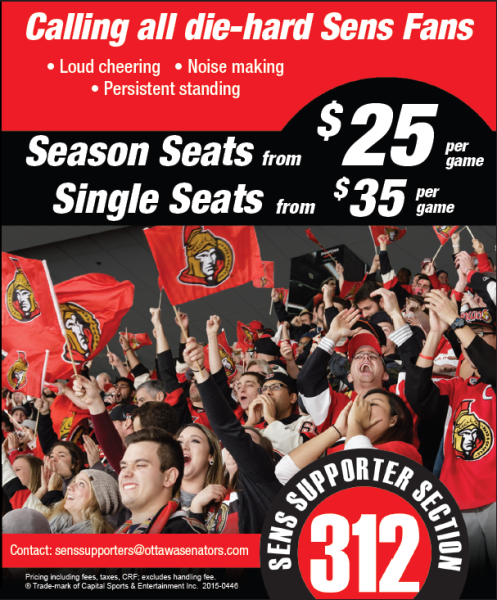 If Ottawa can make this happen, surely Vancouver can too.

Price it right, relinquish some control to a supporters group, be patient, and I think it has a chance to be a great success.