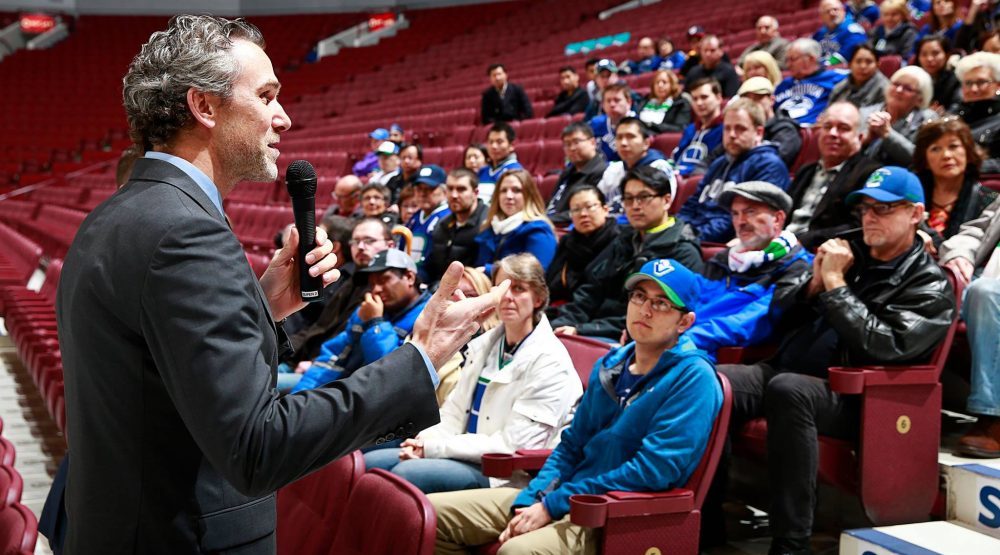 NHL fans don’t seem to have a lot of confidence GM Jim Benning and President Trevor Linden, according to a new poll by The Hockey News. This isn’t breaking news.

When a team drops to 28 out of 30 NHL teams in the standings, that’s expected.

But what is surprising is just how low confidence in them is.

The Canucks ranked 30th out of 30 NHL teams. That’s dead last, and they finished last by a lot. 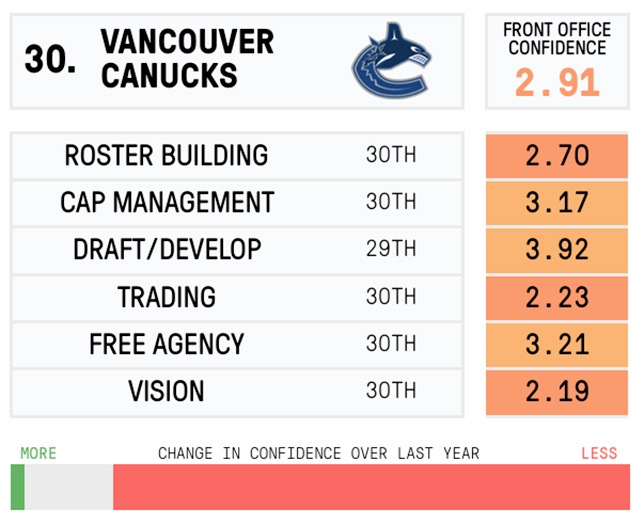 With a confidence rating of 2.91, the Canucks finished well behind the Montreal Canadiens, who finished second-last with a rating of 3.68. The Boston Bruins, Edmonton Oilers, and New York Rangers rounded out the bottom-five.

At the top of the list were the Tampa Bay Lightning, Florida Panthers, Nashville Predators, Pittsburgh Penguins, and Washington Capitals.

Canucks fans, as we know, can be a fickle bunch (they have 46 years worth of reasons to be fickle). But what’s interesting to see here, is how other teams view the Canucks.

Vancouver is no longer one of the most hated teams in the league, as they were for much of Mike Gillis’ time as GM. The mainstream media isn’t out to get them either, as Trevor Linden and Jim Benning are likeable personalities that get along great with hockey’s old guard.

Pointing to the 2015-16 season standings would seem like a good place to start, but that doesn’t mean everything. The Arizona Coyotes, Buffalo Sabres, and Winnipeg Jets all ranked in the top-10 of this list, yet missed the playoffs last season. The Toronto Maple Leafs finished dead-last in the standings and have made the playoffs just once in 12 years, but they rank #13 on this list.

So why do the Canucks rank 29th in drafting/developing and 30th in roster building, cap management, trading, free agency, and vision?

Many Canucks fans say they don’t know the direction of the team, so it’s understandable if other fans are confused as well. I believe the Canucks have a plan to try to win before the Sedins retire, but admittedly that’s just an educated guess, and the plan certainly hasn’t been communicated well enough.

The Canucks’ ranking in drafting/developing is way too harsh, given the Benning regime has already drafted three players that have played in the NHL (Jake Virtanen, Jared McCann, Nikita Tryamkin). They’ve also got some excellent prospects in the pipeline (Thatcher Demko, Brock Boeser, Olli Juolevi). Fans generally know very little about other teams’ prospects before they get to the NHL, so this is understandable.

Perhaps the lack of confidence in drafting comes from the fact that Vancouver has chosen to trade away picks, rather than accumulate them. Benning has chosen five players in the first two rounds in his three seasons at the helm. Steve Yzerman, whose Tampa Bay Lightning finished first in this category, has chosen nine times in the first two rounds over the same time period. Most second round picks don’t become impact players in the NHL, but nearly all of them have potential for it early on.

The rest of the categories can be summed up with signing Luca Sbisa, Derek Dorsett, Ryan Miller, and trading away Jared McCann and Hunter Shinkaruk. These moves, by and large, didn’t inspire a lot of confidence in management from Canucks fans, so why should the rest of the league’s fanbase think any different?

Time will tell how we end up viewing the Benning regime, and much of it will have to do with how they draft. With so many draft picks traded, he has less room for error than most organizations in a rebuild.

Does Jake Virtanen become a 30-goal scoring power forward? Are Olli Juolevi and Nikita Tryamkin going to develop into top-pairing defencemen? Will Thatcher Demko become a Vezina-caliber goalie? How good can Brock Boeser be?

If those players develop closer to the best-case scenario, the Canucks will climb on this type of poll. Until then, if they’re in the basement in the standings, they’ll be in the crawl space in the poll.