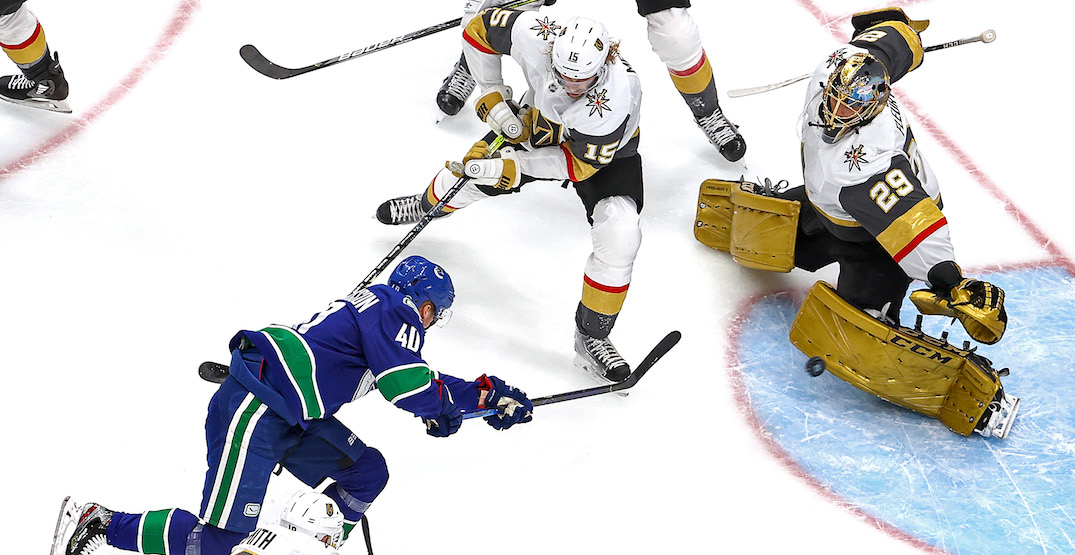 For the first time these playoffs, the Vancouver Canucks are facing elimination.

The Canucks had a one-goal lead after two periods in Game 4, but the Golden Knights scored three times in the third to win 5-3 and take a 3-1 series lead in the Western Conference semifinal.

Max Pacioretty had the game winner and the second of three Knights goals in the third period when a Nate Schmidt centring pass went off his skate and in.

Pass in front goes off Pacioretty at the side of the net and gets behind Markstrom. #Canucks #VegasBorn pic.twitter.com/3cIsQuQJ55

Jacob Markstrom looked unhappy with a couple of the goals he let in, particularly the tying goal by Nate Schmidt early in the third.

Markstrom allowed five goals on 33 shots for a .848 save percentage, his lowest of the postseason.

The Golden Knights opened the scoring on the power play when the Canucks were uncoordinated and took a too many men penalty for the second straight game.

Bad pass by Fantenberg, then poor decision to try to sneak off for a change, compounded by changing his mind, leading to too many men penalty. #Canucks pic.twitter.com/8kU089FPMW

One positive for the Canucks in this game was their power play. They went 1-for-11 on the power play in the first three games of the series, but were able to convert twice on five attempts with the man advantage in Game 4.

Elias Pettersson scored shortly into the team’s first power play opportunity of the game on a shot over the glove of Marc-Andre Fleury, who started in goal for the Golden Knights.

Pettersson waits, waits… waits… and the snipes it top shelf on Fleury to tie the game #Canucks #VegasBorn pic.twitter.com/OE0r7e1OFQ

The Canucks took a 3-2 lead in the second period on a Tyler Toffoli goal set up beautifully by Quinn Hughes.

Want to see the first lead change of the series?! 👇🚨 pic.twitter.com/u9K0Ek6ZIO

With the assist, Hughes set a new franchise record for most points in the playoffs by a rookie.

Bo Horvat scored the other goal for the Canucks, stuffing in a puck that was previously deflected by JT Miller for his NHL-leading ninth goal of the playoffs.

For the second time tonight, we're tied!! Thanks @BoHorvat!! 🚨 pic.twitter.com/e53MVyIAFE

Tyler Myers returned from injury and played 22:06 in his first game since Game 2 against St. Louis.

“His game probably wasn’t as sharp as he wants it to be,” Travis Green said after the game. there isn’t as much time to practice, he’s skated for about a week now. He probably wants to have that one goal back but he’s a good player and it’s good to have him back.”

Although suffering the same outcome, the Canucks played much better than the previous night and were in position to win Game 4. Instead, they find themselves needing to win three straight games against one of the best teams in the NHL.

The Canucks will look to stay alive in Game 5 on Tuesday at 6:45 pm.