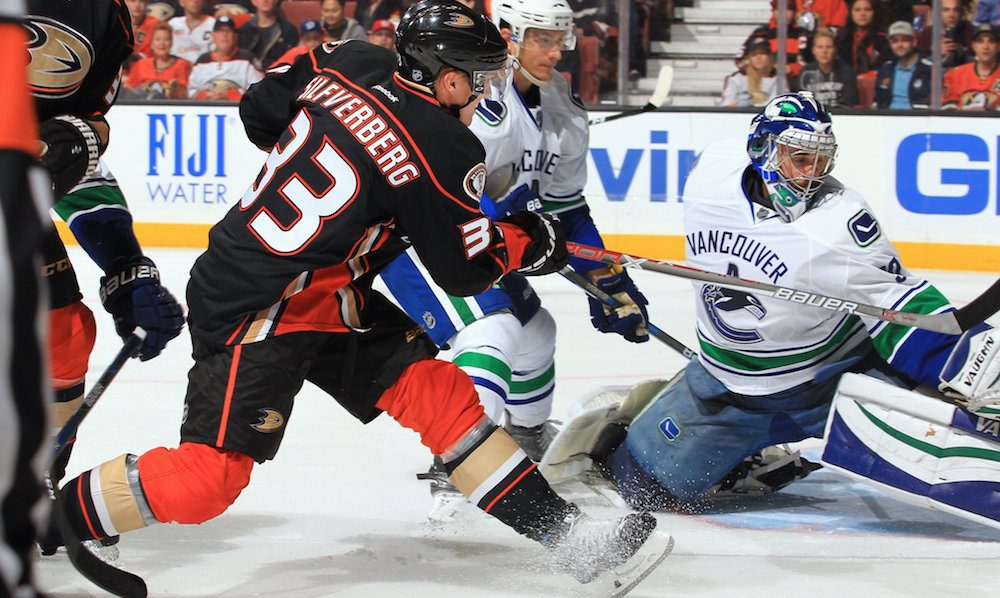 For one thing, it had to happen at some point. At least now it’s over with.

And for two, it probably wasn’t good for the team – thinking they could show up for a few minutes of each game, erase deficits, and skate into the horizon with points in the bank every time.

Against the Ducks Sunday, they were out-shot and out-chanced for the third straight ga. This time, though, they really went at it hard.

Amazingly, they were still in it until there were only two minutes left and the Ducks scored their 4-2 goal, which is how the game ended.

If you check out this shot attempts chart, you’ll see the Canucks basically slept through the first two periods. 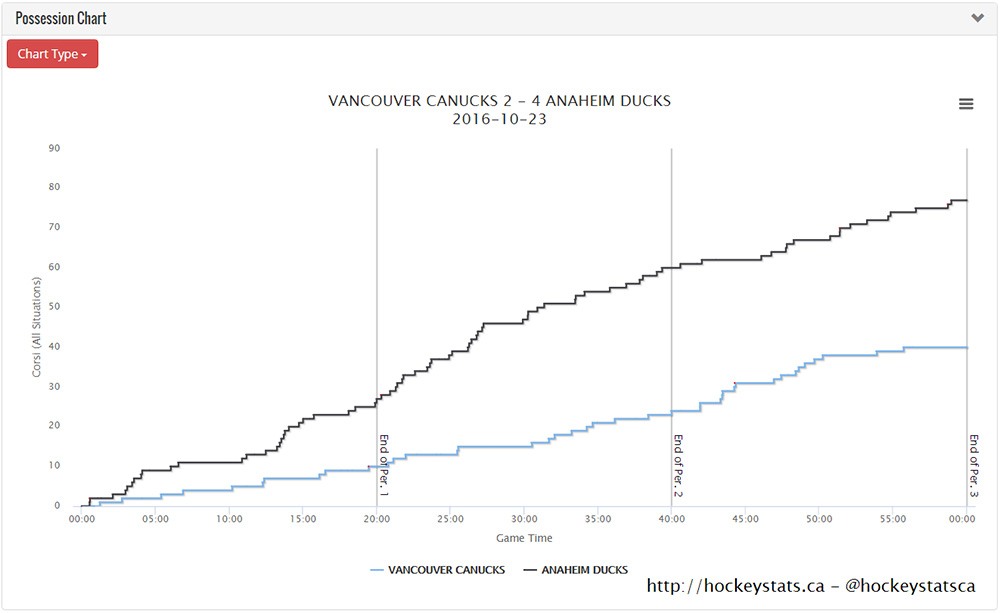 Look, it’s not the end of the world. The Canucks were on the road, they were on the second half of a back-to-back, it was an early start, and they’d played six games in eight nights. Just the fact they were in a 2-2 tie until halfway through the third is a feat.

Let’s start with some positives: Loui Eriksson has looked pretty good on the power play and not bad in the offensive end. You can see he thinks the game a lot like the Sedins – he makes good passes and makes smart plays at the blue line.

Here he is setting up Henrik Sedin for a goal, just after a Canucks power play expired in the third period.

You can’t see it, but Larsen pinched to get the puck to Eriksson here, a play he made shortly after ringing a shot off the post. I mention this to make the point that despite his iffy defensive play, he is starting to make a difference on the power play, as Jim Benning promised he would.

Another great Eriksson play came on this goal by Bo Horvat. You can’t see it, but Eriksson made the Sedin-like pass that released Horvat.

Look, I’m no NHL coach, and I know no one’s asking me for advice, but the biggest problem with the Sedin line to me is their transition through the neutral zone.

The Sedins don’t have the legs they once did to consistently carry the puck blue line to blue line and Eriksson can’t solve that problem for them (obviously Jannik Hansen can).

After Eriksson was reunited with the twins midway through the first period – Vancouver forgot to wake up from their afternoon nap evidently – they struggled moving the puck up the ice.

On one Sedin shift midway through the second period, Eriksson twice messed up breakouts and caused the Sedins to be hemmed in their own end. Their next shift out, it happened again.

He did have this one speed burst up the boards which made me wonder why he so rarely uses it.

Aside from that, their breakout was non-existent.

In the third period, the Sedins reappeared. Early on, they had a great shift, pinning the Ducks in their own end. Going back to watch how it originated, I saw that Hutton carried the puck from his own blueline deep into Anaheim’s end before handing it off.

So that’s one way to do it.

The other ways are having the man advantage or having offensive zone faceoffs.

Not exactly a great solution for their neutral zone issues.

Funny thing is despite being completely outplayed by the Ducks, Vancouver didn’t lose because of process.

I mean, if you outshoot a team as badly as Anaheim outshot Vancouver, sooner or later you’ll get the goals. Still, the goal Anaheim scored to win the game was almost all luck.

Check out how the puck deflects off Edler’s stick into the air and comes down right in front of Ritchie, and neither Tanev nor Miller could do anything to stop it from going in.

And on Anahiem’s fourth goal – Edler did nothing to help out, falling when he could’ve stopped Perry – but what happened to Miller?

Live to the goalie for his reaction:

Three attempts at reading his mind:

3. Pissed off that his team pretty much put it on him to single-handedly win this game.

Covering the Canucks, writing SixPacks, I have to tell you having a team that wins is a lot more fun than what we were subjected to last year.

Even though it takes a bit of effort to put all this together, I’m finding myself looking forward to it again. It’s quite something considering how finding storylines in those final months of last season – eg: Tryamkin’s TALL so the Canucks have HOPE!! – became nearly impossible.

Note: I can’t speak for Wyatt, our other main SixPack writer. He makes a joke every minute in life and seems pretty happy-go-lucky to me.

So after the Kings game, I was wondering how non-hockey-writing fans are feeling about this team. Do they take a team that wins, despite its defensive (boring) style of play?

Would they rather have the roster of the 4-1-1 Canucks – who might make the playoffs this year – or the 1-1-3 Leafs, who are struggling to win but have elite talent and a potentially very bright future ahead?

Some responded as expected:

@omarcanuck Toronto. Winning in the moment is fun but it’s nicer knowing there’s a bright future ahead

@omarcanuck Wld rthr have better potential thn the house of cards we have rite now. We’re a 5 gm losing streak away frm being a mess again

And some thought the answer was so obvious the question need not be asked:

@omarcanuck Is this a rhetorical question

It wasn’t a rhetorical question, though. I believe there’s a huge group of Canucks fans who are really enjoying having a competitive team again, and that those who aren’t hardcore, die-hard fans, don’t take the same long-term outlook to the team.

Unfortunately they’re not the ones on Twitter, hanging on every word Jim Benning says.

Still, there are some on Vancouver’s side.

@omarcanuck apparently I’m only one who thinks benning is building a nice team. We have a young core. Bo bae virt hutt stetch boess demko…

True, the Canucks do have some high-end prospects in the system. Trouble is, aside from Brock Boeser, there’s not much scoring help coming to replace the Sedins.

Those elite forwards usually come early in the draft, so how Vancouver will acquire them remains to be seen.

Last season, I wrote about Ray Ferraro and Ryan Miller squaring off on the goaltenders’ equipment debate.

If you can’t remember it, here’s a bit of the back and forth:

Ferraro: “Ryan Miller is 170 pounds and Carey Price is 215. Why do they wear the same size pants? No one is saying make them unsafe.”

Miller: “I’m at the centre of this because Ray Ferraro said something? … I’m getting a little defensive because it’s kind of comical. It goes through the league. They’re very defined specifications of what you can and can’t have.”

Ferraro: ““I understand why he’d be sensitive about it because I mentioned his name … I don’t know how anyone can look at a goalie today and think their equipment is for protection. It absolutely isn’t … it’s about their goals against average.”

With the equipment changes delayed because they’ve hit recent snags according to Sportsnet, Miller vs. Ferraro has heated up again.

On Sunday, Miller was quoted by Yahoo Sports, saying this:

“They started using my photo because Ray Ferraro started saying my name to correlate with pants and he doesn’t know what he’s talking about,” Miller said.

Kind of hope they keep taking shots and don’t talk it out in person.

With Sportsnet in Shippagan for Hometown Hockey Sunday, they put together a tribute for former Canuck and hometown boy, Luc Bourdon.

You can watch it here, and if you haven’t seen it, it’s worth five minutes of your time.

Luc Bourdon’s ife was tragically cut short but his impact on the @canucks and on aburr14 have not been forgotten. @droetker_canada pic.twitter.com/FobguhXj00

“He was someone I looked at as a model because he had the total package. He had the size, the skating ability, he was one of the fastest guys I’ve ever seen.

I wish I could have gif’d a careers worth of highlights for you Luc. pic.twitter.com/guBQbEEYYK

❤️ you will always be one of my favourites. pic.twitter.com/b3CwG3X6S6

Note: Huge thanks to Ryan Biech for always helping with the SixPack gifs