All eyes are on the NHL Draft this week, as teams look to the future. The Canucks hold the 23rd pick and will be looking for another building block to accompany their growing prospect pool.

The foundation of all successful franchises are built through the draft, so it is vitally important to pick the right player, particularly in the first round.

Vancouver’s prospect pool is thinnest on the blue line, so it makes a lot of sense for them to select a defenceman in this draft. If they do go down that road, it will be the first time the Canucks have drafted a defenceman in the first round since 2005 when they selected the late Luc Bourdon.

Today we will profile a few defencemen that may be available when GM Jim Benning takes the podium. 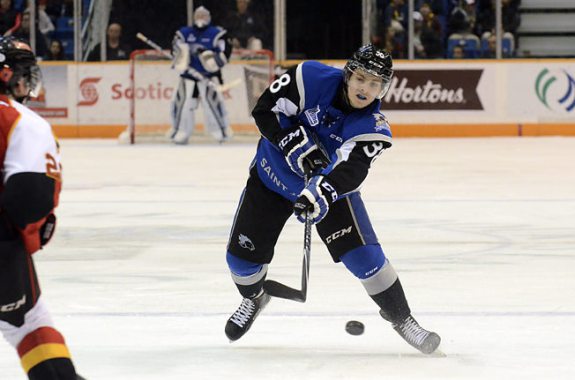 Born in the Czech Republic, Jakub Zboril made the move to North America this past season and joined the Saint John Sea Dogs of the QMJHL. Primarily thought of as an offensive defenceman, he can still handle himself in his own zone. Zboril set the team record for goals scored by a rookie defenceman with 13 and was named to the QMJHL Rookie All-Star Team. He states that he models his game after Nicklas Lidstrom and his favourite current player is P.K. Subban.

Director of Central Scouting Dan Marr has great things to say about Zboril:

His game with the puck, without the puck, I don’t know there’s too many holes in his game. … He’s a solid two-way guy that these are the type of guys you see playing in the [Stanley Cup] Playoffs.

While the prospect site Future Considerations echoed those sentiments:

A good two-way blue liner…plays a complete game and relies on his impressive footwork to maintain defensive coverage as well as put himself into the offensive play…has a good top speed and all-round mobility…has a dangerous point shot that is both accurate and hard…has a physical element to his game and will step up to make a hit…clears the crease and separates opponents form the puck with his body in the defensive zone…has an active stick…good upside as an all-round NHL defender.

Zboril is likely to be selected in the 15-20 range but if he is somehow still available at 23rd overall, the Canucks should not let him slip any further. His offensive prowess is exactly what you hope for when drafting a defenceman in the first round. 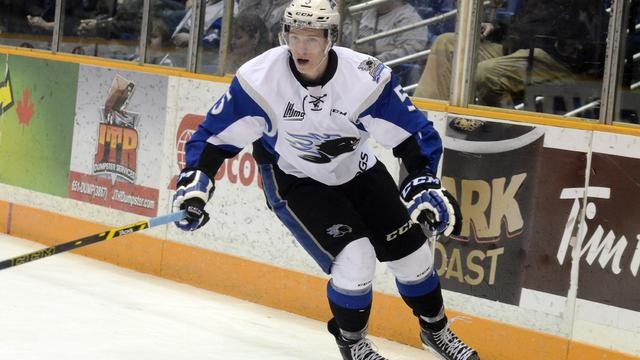 Another option for the Canucks with be Zboril’s teammate Thomas Chabot. While Zboril is regarded as an offensive defenceman, Chabot is considered a more rounded two-way defenceman. Early in the season, with his family making the trip to see the Sea Dogs home opener, Chabot was scratched. This appeared to light a fire under native of Sainte-Marie, Quebec for the rest of the year and he became the anchor that stabilized their defence.

Chabot played for Canada at the U18 World Championships in May, where he put up 5 points in 7 games.

A quick-thinking two-way defenseman that is able to make fast decisions and help his team whenever he is on the ice. Possesses excellent mobility and has good individual puck skills; can catch the opposition off guard with his speed. All-in-all, a player who strives to be better with every shift, staying a student of the game. Has the potential to flourish into a very reliable all-around defenseman that can eat up minutes.

A strong passer who delivers pucks with good timing and accuracy…has the ability to read the play and pick-and-choose his spots…has a powerful stride that generates power but could improve the overall quickness in his feet…willing to join the offensive attack…handles the puck well…not a big point shot but gets it on net consistently…reads the play well in his own zone and defensively he has the size and reach to close off lanes…good transition defender that moves the puck up ice.

If Zboril is selected before the Canucks approach the podium, then Chabot isn’t a bad consolation prize. Chabot may never be an offensively dominant player, but he could develop into a minute-eating defenceman that can play in all situations. 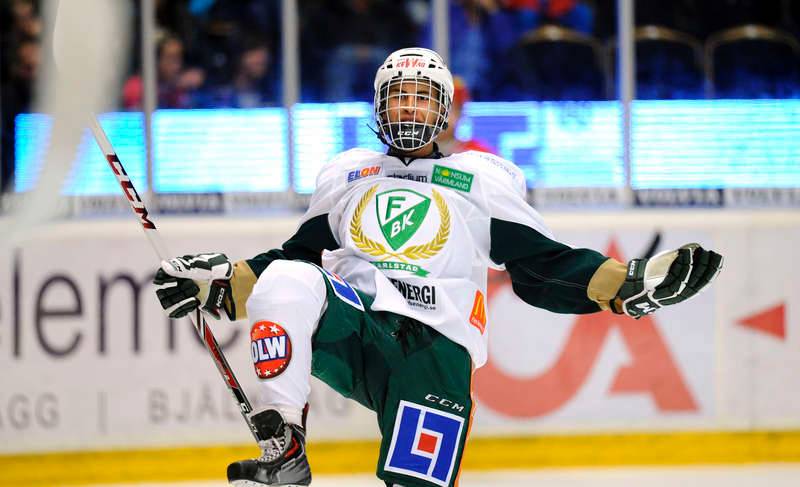 Originally projected to be a top 5 pick at the start of this year, defenceman Oliver Kylington has tumbled down the rankings throughout the season. It isn’t clear why Kylington fell down the rankings, but the general word was that scouts were just left wanting ‘more’ from Kylington.

Kylington played for AIK and Farjestads of the Swedish Hockey League before being sent to Farjestads U20 team. He missed the World Juniors due to injury and wasn’t dominant during the U18 tournament in May. Still, Kylington possesses elite skating and great hockey sense that he uses to control the game.

Rafik Soliman from Eliteprospects.com had great things to say about Kylington’s game:

A smart two-way defenseman, who has tremendous feeling for the game and reads the plays well. Oliver Kylington is only average sized, but lets you forget the missing inches with his hockey sense, his strong vision and remarkable skating abilities. Owns a good shot from the blue-line and combined with this very good puck- and passing-skills, he can guide a power-play and the team’s offensive game to success

Exceptionally poised, mature, two-way defenseman…handles the puck well and likes to join the rush…plays with impressive confidence and is absolutely fearless with the puck on his stick…doesn’t possess a bomb of a shot, but knows how to put the puck on target…quite impressive top speed and acceleration, especially in offensive situations…not overly big and has some defensive positioning issues to sort out…minute-munching ability as this kid just has ice water flowing through his veins.

If Kylington is available at 23rd, the Canucks need to seriously consider selecting the Swedish defenceman. Kylington is the ‘boom or bust’ pick for this first round. Whoever selects him are taking the risk that this year was a major stumbling block in his development. If it was just a small misstep, then Kylington will easily become the steal of the draft. 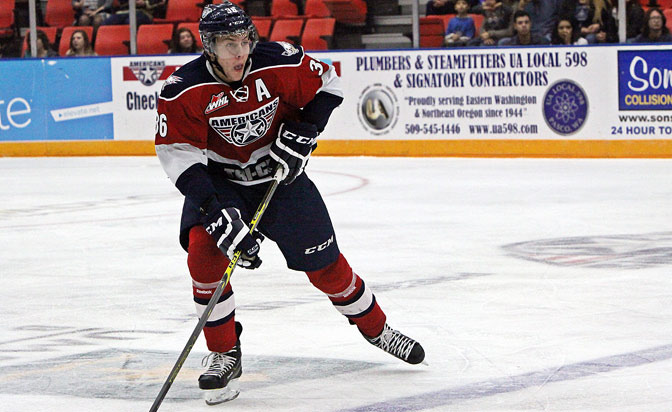 Rumoured to have been scouted by GM Jim Benning himself, Brandon Carlo is another defenceman that the Canucks may select on Friday. Carlo is much lower in the CSS rankings but is listed as 22nd in Bob McKenzie’s final draft rankings, so he may end up being selected in the first round by a team.

A smooth, mobile defending type defenceman. He can break up the cycle and gain possession for his team. He takes space away from opponents and is a difficult player to break down because of his skating. Has a real steadiness to his play and goes about his tasks in a nondescript manner. Effective moving puck but not considered an offensive contributor.

He’s a really good skater and has great mobility for a player his size. The reach and range are there. He handles the puck well and is one of the best guys I’ve seen this year at being able to pass off the boards to a teammate.

So although Carlo will likely turn into a good prospect for a team, in a lot of scouts’ eyes he is not worthy of a first round selection, especially with the talent that would be passed to select him.

If the Canucks can acquire a second round pick, then I am all for selecting Carlo, but he shouldn’t be an option at 23rd overall. 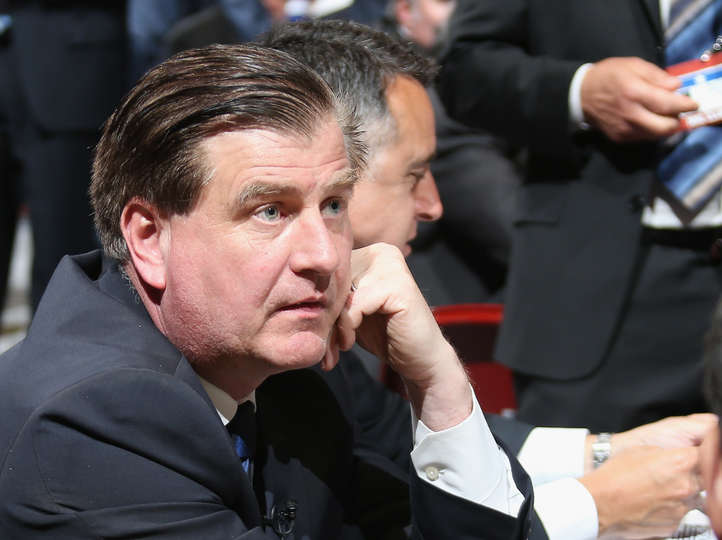 With the Canucks selecting 23rd overall, it is difficult to predict who will be available. But if the Canucks are able to leave the draft with one of Zboril, Chabot or Kylington, and avoid Carlo at 23rd, then Canucks fans should be ecstatic.

Although it is an organizational need, selecting a defenceman isn’t a foregone conclusion. Tomorrow we will profile four forwards that the Canucks may select in the first round.