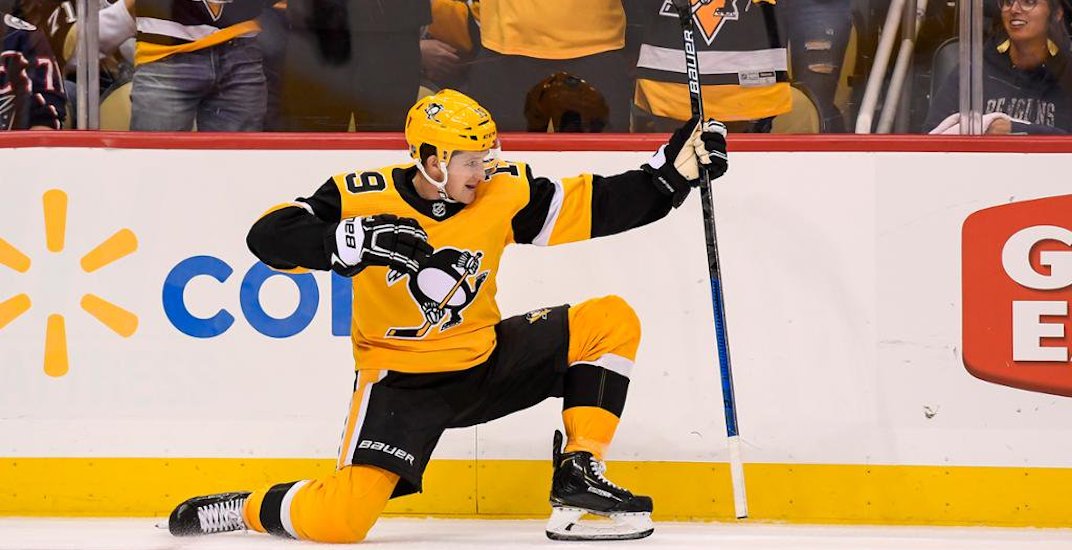 As one of two first-rounders taken by the Vancouver Canucks in 2014, Jared McCann was the other guy.

Jake Virtanen got most of the headlines, which was understandable for the local guy taken sixth overall – 18 spots ahead of McCann, who was chosen with the 24th overall draft pick acquired from Anaheim in the Ryan Kesler trade.

But after just one season in Vancouver, Benning traded McCann to the Florida Panthers as part of the Erik Gudbranson deal. Moving on from a first-round pick that quickly (less than two years after he was drafted) is rare. Even Patrick White lasted two years.

You have to go back to 1997 to find a Canucks first-round draft pick that was moved quicker than McCann, an honour that goes to Brad Ference, who was included in the Pavel Bure trade in 1999.

There have been plenty of rumours as to why McCann was moved, but regardless how true those are, it’s now hard to defend the trade (which also included a second-round pick going to Florida) — more than three years after Benning made the bold move.

Gudbranson was a disaster in Vancouver. Benning salvaged it somewhat, getting Tanner Pearson in a fleecing of the Pens late last season. Gudbranson was moved for next to nothing by Pittsburgh this season, in a salary dump with Anaheim.

McCann, for his part, wasn’t anything special with the Panthers, scoring just 53 points (18-35-53) in 143 NHL games spread over three seasons. So the young forward was traded by Florida to Pittsburgh as part of a four-player deal that also included three draft picks changing hands.

Finding his form with the Penguins

He might not haunt their dreams, but Canucks fans might be wondering “what if” during tonight’s game in Pittsburgh.

Now at age 23, in his fifth NHL season, McCann appears to have found a home.

In 54 games as a member of the Penguins, Jared McCann has scored 20 goals and is a plus-25.

In 54 games since joining the Penguins, McCann has 20 goals and 33 points. The player he was often compared to, Virtanen, has just 10 goals and 16 points in his last 54 games by comparison.

McCann has been on a tear this month in particular, scoring five goals and 11 points in 11 games, plus a shootout-winning goal, during the month of November. He now ranks third on the Penguins in points (16) and second in goals (nine).

Jared McCann had 11 goals all of last season. He's already up to 9 goals in 22 games this season. 👏 #IceSurfing pic.twitter.com/bWLpqQjXRh

Many Canucks fans are eager to poke holes in McCann’s game — an understandable reaction for a fanbase terrified of wasting away a first-round pick.

And while McCann doesn’t look like he’s going to be a superstar by any means, he appears to be a useful forward for the Penguins — one that can contribute on a second or third line.

No, he’s not piling up points riding shotgun on Sidney Crosby’s line. And no, he’s not cashing in the majority of his points on the power play.

McCann’s most common linemates are players like Alex Galchenyuk, Brandon Tanev, Dominik Kahun, Patrikc Hornqvist, and Nick Bjugstad. He has only two power play points, averaging just 1:19 per game with the man advantage.

Evgeni Malkin has figured into the scoring on points earned by McCann this month on just three occasions.

Other players that have figured into the scoring multiple times on McCann’s goals and assists this month are the likes of Alex Galchenyuk (three), Dominik Kahun (three), Brandon Tanev (three), and John Marino (two).

McCann has been a good possession player this season, ranking sixth among Pens forwards with a 54.23 Corsi-for percentage. He’s on pace for 33 goals, though his shooting percentage (19.1%) is abnormally high, which is a sign that he’s likely getting some good luck in the goal-scoring department.

Whatever the case, McCann is a pretty good bargain for the Penguins this season, as he finishes the last year of a contract paying him $1.25 million this season.