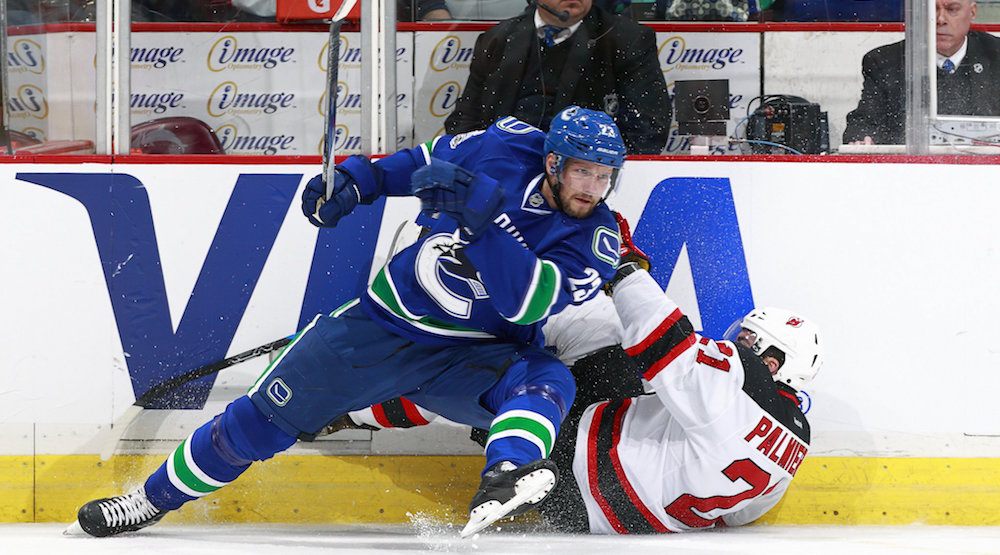 Who knew an overtime game could be so boring?

Vancouver lost 2-1 to the Devils in OT Sunday and even 3-on-3 overtime wasn’t very interesting to watch.

Strangely enough, it started pretty wide open and the game looked as if it would fun. Then the real Canucks returned and we were treated to a game where shots were 22-22 and only three goals were scored.

The Canucks we’ve become accustomed to returned on the power play too, going 0-for-3. Worse, their shot totals in the three power plays in succession: 2, 1, 0.

Yes, with the score tied 1-1, they could’ve won the game on the power play in the third. For the second straight game, they came up with not a single shot in that critical two minutes.

With that in mind, “points in three straight” is a flattering description for the Nashville, Philadelphia, and New Jersey games.

With the way they missed opportunities to win all three, can you disagree?

JPat and Kuz asked Willie some great questions about it after the game, and these answers – oh they’re good.

Paterson: What will it take to get some sort of change or are you prepared to just kind of ride a power play that’s going to be 12 percent?

“You don’t think we should ride it at 12, eh? It’s a pretty good unit. I believe in them. I believe Hank and Danny have scored their whole career and I have confidence that they can score, so we’re going to go with them a little while longer.

We’ve made some changes on it, we’ve made some adjustments a little bit on our structure and where we’re at with it. All the guys know we talked about it before the game. I said right from the start of the year, I believed if we’re going to make the playoffs, we need our power play to go.

I believe that. None of those guys are happy with the way it’s going, but they’re our best group. If you look at our best offensive group, that’s who they are. Shuffling around and mixing it up – that’ll take three or four games to gel. So I’m prepared right now to see what they’ll do and I’m not going to change it here for three or four games anyways.”

Paterson: How frustrating is it for you, once the puck dropped, it’s on the players at that point, to see them not generating shot attempts in a late power play like that?

The top of the organization’s frustrated. All the way through is.

We’ve looked at it, we’ve changed around personnel before and it didn’t help it.

We’ve got guys we’re asking a lot from to execute on that power play. It’s tough for them, but I think as a group we’re going to find some things and I think we’re going to take off.”

Kuzma: Do you have to look at the formation?

“Yeah, we did change the formation. We changed it. The problem today was we didn’t win any faceoffs. We lost the faceoffs, we hardly got set up today at all. Usually that isn’t the problem, but we’ve made changes on our formation and how we’re going to play it.”

Did your jaw drop when Willie said “the top of the organization’s frustrated”?

Just want to quickly point out that the Canucks did change their power play formation since the Flyers game.

Here’s a shot of what that power play looked like on Thursday. 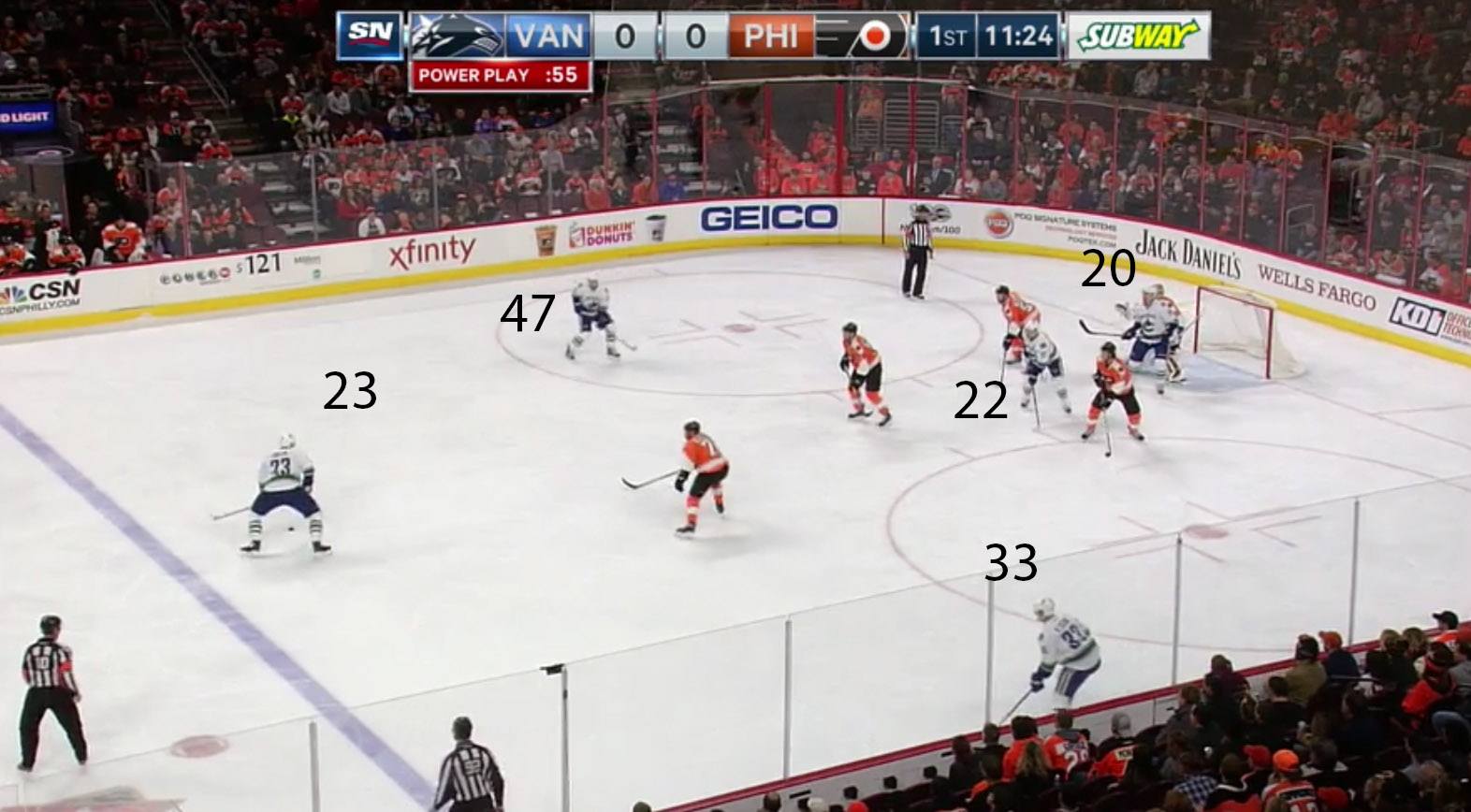 Edler’s at the point, Baertschi’s at the left side, Sutter’s net front.

After that game, I wrote that it made no sense for the right shot (Sutter) to be standing in front of the net, while the left shot, Baertschi’s over on the left side.

Miraculously, Vancouver finally changed that. Here’s how they looked Sunday (note this is from the opposite side). 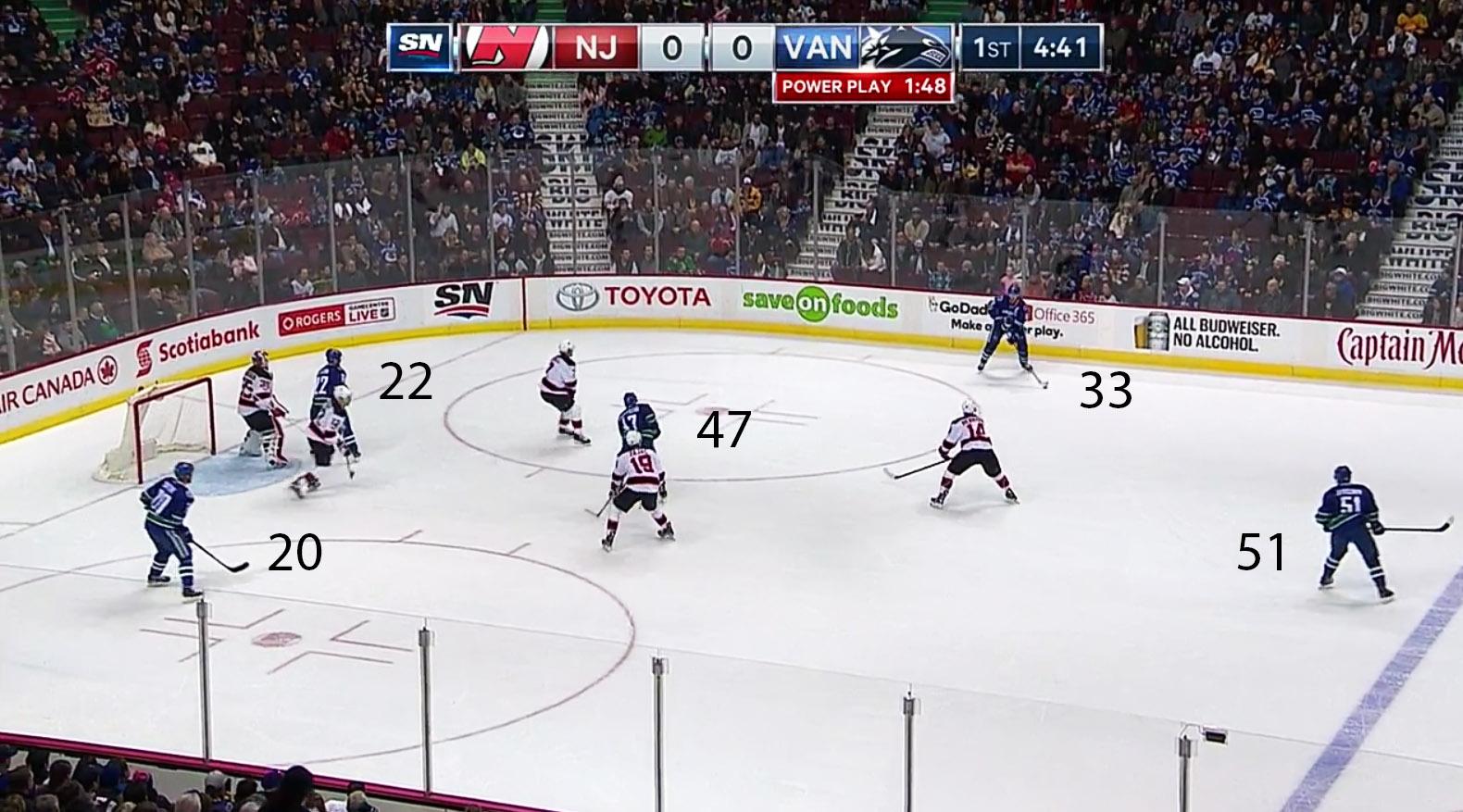 Note Sutter’s on the left side with Baertschi in the middle now.

On the bright side, at least they’re using a look that makes more sense.

Still, the fact Sutter’s still on the first unit when he loses as many puck battles as he does is baffling. Contrary to Desjardins’ take, they do have options with the personnel, and I’m not convinced any first unit without Horvat is this team’s best chance at goals.

Here are the Canucks’ forwards ice times against New Jersey.

You saw that right – Megna’s fourth on the list, above Daniel Sedin, Markus Granlund, and way above Burrows.

The refs appear to be giving Vancouver a lot of help recently.

Just after yet another costly failed Canucks power play in the third period, New Jersey scored this goal that would’ve made it 2-1.

It was eventually called off on an offside call – a marginal call at best, and hardly enough to turn over the call on the ice.

Now, no one does the conspiracy theories quite like Tony Gallagher, and here’s what he said Friday morning after the Flyers game.

Suddenly Ryan Miller is touched in his crease – no goal is the immediate call? I don’t know, I’m starting to think they want the Canucks in the playoffs … No Canadian teams were in the playoffs last year. [Rogers] died a thousand deaths in ratings all of last year. They need help, and what’s better than having the second biggest market in the country in the playoffs?

I don’t know, I’m just putting it out there. I’ll get called a weird conspiracy theorist. I want to see more evidence – maybe it’s just a little coincidental run.

We’re very quick to point out when the Canucks are getting shafted in the NHL. We’re a little slower on the uptake when things start to go Vancouver’s way, but in the last five or six games, things have somewhat gone Vancouver’s way a little bit more. I wonder if that trend will continue.”

That was Gallagher’s take on Friday.

On Sunday, this was the play called offside, propelling Vancouver to overtime.

The Sedins and Eriksson looked incredible in the first period against the Devils, but that was largely because New Jersey seemed to think keeping the twins on the outside would shut them down.

They had time and space to operate and eventually Eriksson found a way to score this beauty early in the second.

The goal shows that Eriksson and the Sedins have promise, which is more than we’ve seen from their other linemates – Sutter and Megna – in weeks.

Still, watch this play where Tryamkin jumps into the rush with the Sedins and tell me he doesn’t get the cycle better than Eriksson or anyone else besides Hansen and Burrows at this point.

Tryamkin also sneaks in off the point to sheild the Devils player and get the puck back to Eriksson. He’s getting it.

One more thing – a few Canucks analysts including Ray Ferraro and Blake Price (and myself) have wanted to see what Eriksson could do on Horvat’s wing for a long time. For some reason we’ve never seen that combination.

We saw it briefly at the end of the game Sunday.

They had 30 seconds together and Horvat found Eriksson for a glorious chance in front of the net.

If that combo worked, it could free Burrows up for the top line to really get the Sedins going again. I just don’t know why they wouldn’t try it.

Don’t know if Tryamkin’s being told to jump into the play more, or he’s just feeling more comfortable, but that rush above wasn’t the only time he jumped up with the Sedins.

He actually did it twice during the first period. Here’s one of them.

Doubt many fans wouldn’t like to see a lot more of that from the giant.

Desjardins had an interesting answer on a question about Reid Boucher too.

Paterson: Is Reid Boucher any closer to getting into your lineup – all these one goal games, close games where an offensive guy might help you?

“Nope. Rodin’s the guy right now that I’ll probably give the first chance to. I’ve talked about that right from the start. He’s the guy I want to see where he’s at.

I think the Sutter line with Megna and Granlund had a big night in Philly. I think the Horvat line’s played good. The fourth line – I don’t see him necessarily being a fourth liner. I think if there’s an injury to the top three lines, then that’s his best chance of getting to play because that’s his best fit.”

The update? As of right now, you’ll have to wait for an injury to see Rodin.

Utica coach Travis Green was on TSN 1040 on Thursday.

“I know from the outside he’s not getting the points people wish they’d see out of him, but I like the way he’s progressing. He’s working hard. He’s on the right track.”

Pressed on why Virtanen hasn’t been scoring much lately, here’s what Green said.

“He’s definitely been snakebitten. It’s not like we have an offensive machine down here either – we’ve got to work hard to score. That’s part of it – it’s a tough league to generate offence. We had a stretch where he scored four goals in four games. He’s a shooter, he’s a guy who has to go to the net hard. I’m expecting he’ll get some results.”

Green spoke about Jordan Subban too.

“People look at the points and they automatically think they’re ready to play in the NHL. Subban gravitates towards that offensive side of the game. He thinks it well, he relishes in it.

For an undersized defenceman, the part that’s probably going to come last is that defensive part – learning how to defend well and win puck battles in his own zone.

He’s a young guy still and strength is going to get better every year, confidence to go into those battles. He is progressing. I hope eventually he gives himself a chance to play in the NHL.”

Note: Thanks to Ryan Biech for his help with the gifs in this post