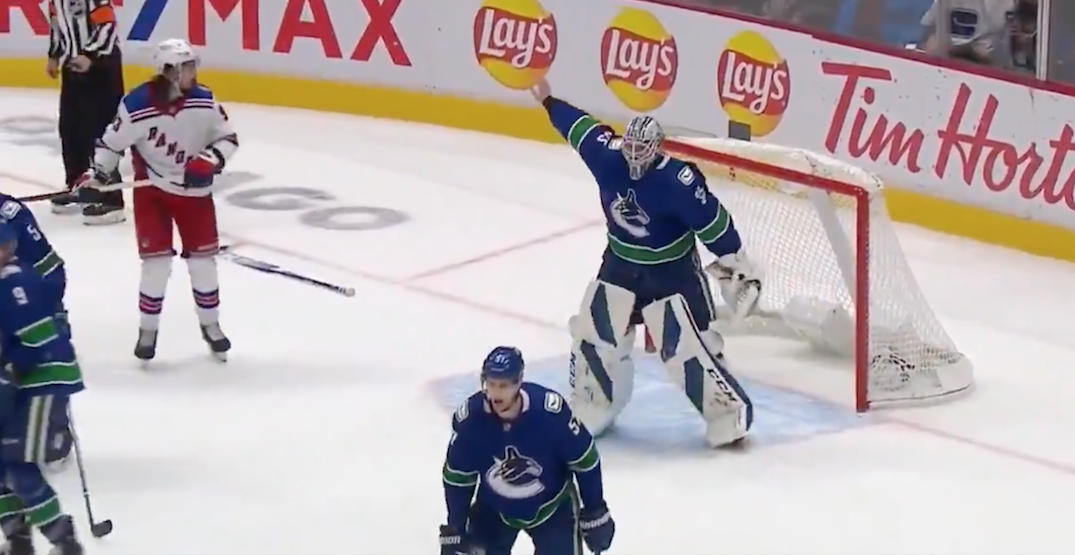 It was easily the most fun night of hockey at Rogers Arena in at least 602 days.

That’s the last time the Vancouver Canucks won a game that mattered in front of their fans, which the home team did in the most dramatic fashion on Tuesday night against the New York Rangers.

After the Canucks erased a two-goal deficit in the third period on goals from J.T. Miller and Vasily Podkolzin, it was time for the Thatcher Demko show.

Just an absurd sequence from Thatcher Demko playing without his blocker pic.twitter.com/RKWYtbSTaq

With the Rangers on a five-on-three power play, a mad scramble in Demko’s goal crease left the Canucks goalie without his stick and blocker. Demko went on to make three incredible saves in a row to keep the game tied.

On the first save, he stacked the pads. His second was a scorpion-style save with his skate that would have made Dominik Hasek proud.

Demko made the third stop with one arm behind his back — literally — as he protected his right hand.

“Maybe in practice or something. I don’t know,” Demko said when asked if he’d ever made a save with one hand behind his back before. “I was trying to cheat on that side. I knew I wasn’t going to be able to use my hand, so I was trying to get as much coverage on that side as I could just in case he raised the puck a little bit higher than my pad.”

Here’s Demko making a save with one arm behind his back pic.twitter.com/d1t7zgjuHF

“It was pretty loud. That was probably the loudest I’ve heard Rogers [Arena],” Demko added. “It’s a great atmosphere getting the fans back in here.”

Loudest ovation I’ve heard for a #Canucks goalie in Vancouver in quite some time pic.twitter.com/6ZBfxzmOqm

The Canucks finished the job in overtime, with Miller getting his second goal of the game on a second effort following a failed breakaway attempt.

CALL IT A COMEBACK! pic.twitter.com/G5budRrYHN

The Canucks improved their record to 4-5-1, snapping a three-game losing streak in the process. They play again next on Friday, against the Nashville Predators.

But enough about that. Let’s talk some more about Thatcher Demko.

“I’m putting on a show, ref. I don’t need no blocker, DO NOT BLOW YOUR WHISTLE!” – Thatcher Demko, probably. #Canucks pic.twitter.com/t4UIfJOiuP

we're all this guy bc of demko pic.twitter.com/PismUEmMHG

Scorpion save by Demko is the save of the year #Canucks

Make sure you watch the Thatcher Demko highlights from tonight