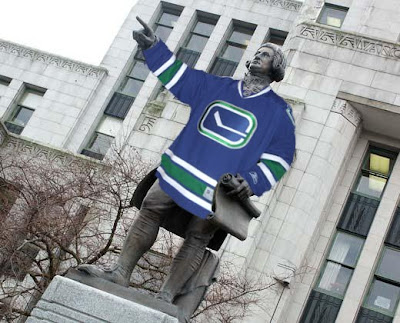 Today the ghost of Captain George Vancouver (the statue in the photo above for those that don’t know who I’m talking about) has decreed that Vancouver City Hall throw its support behind the Canucks playoff run by declaring today as Canucks Day in the City of Vancouver.  That is the only logical explanation I could come up with as to why this is necessary at this point in the playoffs?
I have no problem with raising the flag at city hall, but why declare today April 27th as Canucks Day? Are we happy with a first round victory? Let’s win the cup first, and then declare that day Vancouver Canucks day and make it a civic holiday for all Vancouverites ;). This has 7th Canuck ceremony written all over it.
On the bright side, word is Fin will be on hand giving out white towels to the public.
VancityBuzz.com