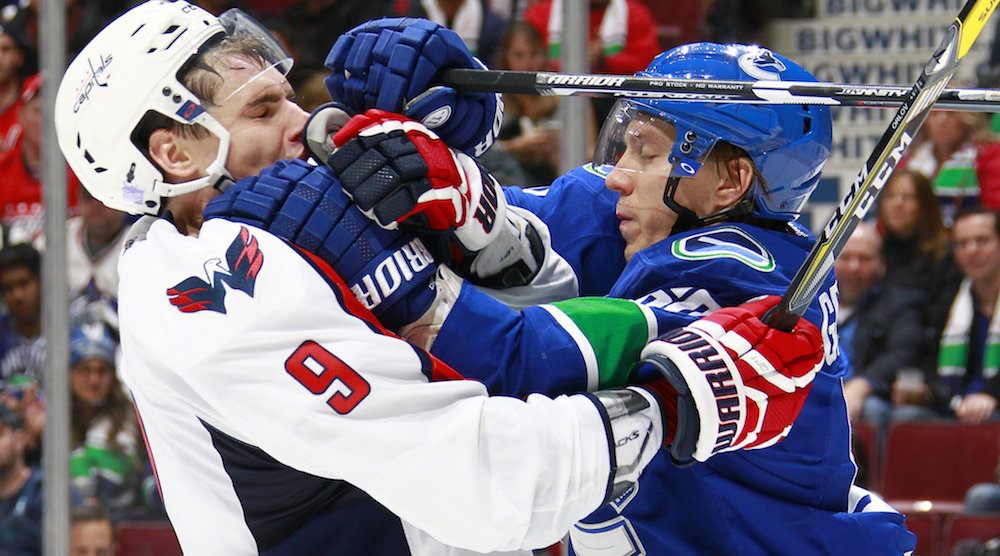 The Canucks lost yet another game on Saturday, this time at the hands of the Washington Capitals, losing 5-2.

It felt much like the other games they’ve played this year. They employed the Homer Simpson strategy where they try and let their opponent punch them in the face repeatedly until they tire out, then the Canucks try to sneak in a quick KO at the end to steal some points.

At times tonight, the Capitals felt like they were raining down punch after punch on the Canucks to the point you were looking at Coach Willie to throw in the towel, or at the very least, have his moustache twitch out an SOS signal.

It feels like the start of a long long seas-

how do you turn this one into a moral victory?

OK, I know what you’re thinking. “The Canucks had some mental lapses in their own zone that costs them some goals.

Sure, Johansson sneaks in behind Philip Larsen and Luca Sbisa somehow, and somehow goes to the net untouched. Conventional hockey strategies probably call for you to cover the opposition going to your net.

But think of it this way, this is a great ice breaker for Sbisa and Larsen. They’ll both wonder “How did we both leave that guy open??”. Then they’ll share a laugh, probably talk about old times, and discover the both drank the same brand of apple juice when they were younger.

This is called team building, folks.

Ok, sure, Sbisa didn’t lift the stick, and Johansson got another goal, but sticks are expensive. If Sbisa tries a stick lift and breaks that twig, that’s, like, $250 right there.

Save a stick, ride a cowboy and all that.

OK, so Loui Eriksson is weaker on the boards then the fish tacos at Taco Del Mar, but, BUT, stay with me here….

Brandon Sutter and Erik Gudbranson made a really good switch on their coverage on the play?

Team building folks. It’s about building character and going hard to the net and keeping your stick on the ice, LET’S GO!

Lots of waving being done by Eriksson on that shift… #canucks

Eriksson started the game off with a really good shot on net, and then it kind of went downhill.

OK, so that was his only shot of the game. And no, he didn’t get any points.

But, he finished fourth on the team in Corsi at 5-on-5!

But still, fourth highest on the team!

Also, yes, playing with one hand on your stick while flailing at the puck might seem like a poor choice, but you have to realize, by the end of the year the strength of his right arm is going to be off the charts. Think of all the one handed goals he could get! Peter Forsberg what? More like the Loui Eriksson Move from now on!

Oddly enough Larsen and Sbisa actually led the team in Corsi at evens (Larsen not so surprising since the Canucks bundle him up in sweet offensive zone start blankets).

Also, Larsen might equal Tanev in “getting plowed into the boards yet somehow walking away unscathed”.

Remember what it’s like to see goals being scored?

Jannik Hansen, reunited with the Twins for the game, showed why he might be the best choice to play with the Sedins for the next little while.

As Hansen said in an intermission interview, you just have to get open.

And not demand a huge contract after one good year.

You remember that Anson Carter?

Another line the fans and media and Virtanen were calling for was put together for the game. Yes, the Vitamin Bears (phone auto corrected Virtanen Bo Bae to this once) played together, and they managed to get a goal. They also had several good chances in the third period, as, believe it or not, the Canucks almost had this game tied at one point.

If the season is going to be a tire fire, there is something to be said about just letting these three kids ride it out together. At the very least, the marketing of Vitamin Bears t-shirts, while confusing, would be glorious.

Also, Bo Horvat’s goal gives him four on the year, the most on the team. From the supposed “defensive” centre Willie sees him as.

Not that that’s a negative. It’s a positive that Willie…was able to motivate Bo to score goals. There we go.

At one point in the second period Jacob Markstrom looked like Rocky vs Drago, flailing about, looking like he was getting pummelled, yet somehow staying in it.

You want to leave guys in open in front of the net? You do that because you know Markstrom can handle it! Not because your positioning was off.

This goal was called off due to interference, marking the first time in years the Canucks got a 50/50 call to go their way. See? Moral victories by the handful folks.

Alex Edler’s stick breaks for the umpteenth god damn time, leading to a breakaway at the other end? Bring it on, Markstrom don’t care! Break all the sticks in the world Edler! BREAK THEM ALL.

Want to take out Markstrom? Just try it, the guy can barrel roll with the best of them.

Do a barrel roll Markstrom!

Somehow the puck manages to get behind Markstrom? It’s ok, he has the reflexes of a cat hopped up on three cans of Red Bull.

The Canucks might have lost 5-2, but don’t let it get lost in the forced moral victory theme of the night that he was extremely good tonight. The game honestly could have been 9-2 if it wasn’t for Markstrom.

It was probably the highlight of the night to watch Markstrom battle his way through the game tonight.

I know this is from last game, but this sort of encapsulates Jack Skille’s season so far. I’m pretty sure he hasn’t gotten a clean shot off year this year.

I mean, the guy made the team on a PTO…

He is saving his best for last…

OK so there’s no moral victory for this one.

If it wasn’t for injuries (We live in a world where Alex Biega is a whisker away from standing in as a forward for the Canucks), it’s hard to see why Skille is still on the team. The theory was he played a “rough and tumble game” and sure, tonight he’s listed as leading the team in hits. It’s just, hit stats are like silent farts of the NHL, nobody knows where they come from and they kind of stink.

When you see the waiver wire activity the last few days, part of you might wonder why the Canucks wouldn’t take a roll of the dice on a younger, possibly higher top end player than a PTO player like Skille.

Well that part of you needs to quiet down, because there is no satisfactory answer.

Canucks seem to be trapped in their own end again. pic.twitter.com/pQSGFpsA3S