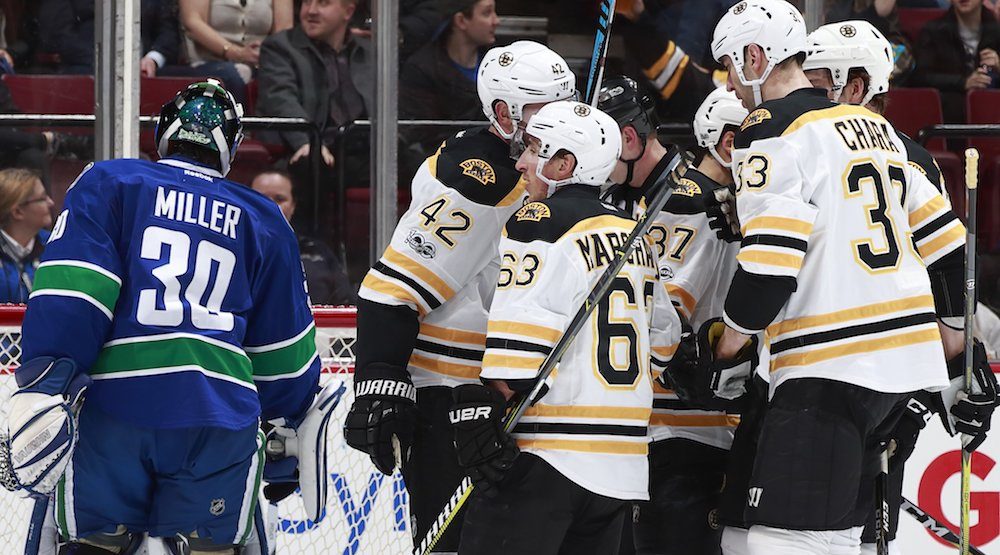 Monday’s game against the Bruins was a perfect summary of Vancouver’s season.

Back to the 6-3 loss to Boston – it was tough to watch. The Sedins wanted it and Edler did too. They were the only members of that 2011 team still around, and they sure tried their hardest.

Worse, the Sedins got punched in the face by Brad Marchand – though not literally this time.

In summary: they tried, they kept it close, and they came up short.

It works to describe most games this season, and the entire season too to a point.

You know things have gone sour when the Sedins stop sugar coating and start telling it like it is.

“We didn’t play well enough. Too slow. Not making the right plays. We were lucky to be in that game when we were.” – H. Sedin

“We had been battling hard as a group, tonight we were individuals. Tough to win like that. We have to get better defensively.” – D. Sedin

Ya, not the best of times at Rogers Arena.

Here’s something to hold on to, though.

Omg I just realized there are only 13 games left in the season. Thank the lord.

His next tweet was about how he’d miss the SixPack once the 13 games are over. Just in a rush to get this article up, so I can’t find it right now. Yeah, huge huge rush.

So this is how it went down.

If the Canucks score that goal 5-7 years ago is it called off on a “kicking motion”? Yes it is.

Then the Sedins started doing their thing.

Tough angle to see it, but Hank (coming in on net here) set a great screen for Granlund who’s skating behind him and gets a beauty pass from Daniel.

Less than 30 seconds later they did it again.

You know that 2011 loss cut deep when Edler shows he has emotions too.

At that point the Sedins were feeling it so much they even tried to get Tryamkin on the scoresheet – and very nearly did.

Boston scored in the first minute, and it was none other than the last person Vancouver ever wants to see score again who did it.

This one, not so much luck… this one was Marchand’s second punch to the face.

In case you missed it, that was Hank he stole the puck from. Hence the punch in the face.

Minutes later Sbisa either thinks the Boston player is a hologram or a ghost or he just makes a bad play here.

And then the third Marchand punch to the face.

Now just in case this trip down memory lane upset you, check this guy out at the end of the game.

If you’re wondering if that silly mistake takes away from everything he did on the ice tonight, the answer is yes, it definitely did. So in conclusion he did nothing and you can sleep well.

OK RIP might be a bit strong. He’s still with the team, he was just demoted to the fourth line just two shifts into a game which he started with Horvat and Baertschi.

I went back and watched that second shift, and I get Willie’s problem. Not saying I agree, but I get it. This is how it ended – Boucher gets the puck on the near boards here.

It ended with him giving away the puck. What you don’t see is the shift started with him giving up the puck in the offensive end on the forecheck. The shift continued with him being slow getting back, and being soft on the back check. Followed by the giveaway above.

He didn’t make it any better when he did this, playing on the fourth line with about three minutes left in the first (he’s in the middle here).

Now, everyone gets that he’s not the fastest, or the strongest defensively. The thing they want to see more of, that is so hard to find in the Canucks lineup, is he has an ability to find the net. This was right at the end of the first.

He just has an instinct for getting shots on net.

Thing is, in Willie’s world, you don’t get to take shots on net if you don’t play hard defensively. You just don’t.

And that, friends, is the section on Boucher.

This from the post-game presser.

Botch: Did you see a team that was giving up in the third?

That might be as close as Willie ever gets to all-out ripping his team.

4. Something to look forward to

Here’s a part of the future Canucks core.

Baertschi is the real deal and it’ll be fun to see him and Horvat have some more skill with them in the lineup next season.

See – the Canucks aren’t great at building hope. The SixPack writers union, though? We got your back.

I’m not doing this because disagreeing with iMac just became cool, I promise.

I’m doing it because I read an article he wrote and I’m not sure he’s right. That’s all.

See, on Sunday, he wrote this article saying that Miller is likely done with the Canucks after this season.

His premise: Miller will command a multi-year deal given his play this season and Vancouver will offer only one year.

While the first part of his argument makes sense – Miller’s been outstanding this season and has earned at least a two year deal – the second isn’t as obvious.

Look, if Jim Benning’s still in charge (it’s a bit of an if at this point), will he really say no to Miller if he demands more than one year?

This is the same Miller he shipped Eddie Lack out of town for.

This is the same Miller he threw a massive $6-million three year contract at when there were limited offers coming in, if any at all, after his melt down in St. Louis.

And this is the same Miller Benning went all-in on as his “starter” to start the season, despite the Canucks’ obvious need to develop Markstrom.

Really, Benning himself would’ve benefited to see if Markstrom could be a starter so he could potentially save salary cap money on goaltending next season.

And now he’s going to say no to his favourite player ever asking for a multi-year contract?

Now it’s quite possible iMac has had conversations with those making the decisions, so we’ll see.

I’m also hoping this last line saves me from a poem attack.

All season we’ve heard about how the Canucks are playing with “structure” and we’ve noticed how that translates on the ice – if you haven’t noticed it’s probably because you fell asleep watching the team, which is funnily enough because of that same “structure.”

Anyway, SportLogiq tracks NHL data using a bunch of software, but their data isn’t available to the public. They do however tweet some of their findings from time to time (to either rub in our faces how much info they have access to, or because they need the likes for an ego boost – your guess is as good as mine).

The stats in this tweet explain why the excitement of watching paint dry is comparable to watching the Canucks defend a lead or a tie.

First, they’re 29th in the NHL in even strength puck possession time. Sportlogiq isn’t using corsi numbers or shot attempts to equal possession like some analytics guys do either – this is based on actual time with the puck.

I don’t feel the need to explain why that’s bad.

The high dump-in rate shows that unlike skilled teams who carry the puck into the offensive zone and create plays, Vancouver gives up possession and traps up the neutral zone more often than not.

It’s sad when you consider this is a team with skilled players like the Sedins and Horvat, who are great at carrying the puck and creating plays. Instead, they’re being coached to dump it.

The thing about the Canucks structure is it’s supposed to mean they’re strong defensively. Reading this next tweet, you’ll see they’re not great in that regard either.

If it just dawned on you that all that “structure” you sat through didn’t even result in strong defensive results, you’re getting it. And you have a right to be a little upset.

All those possession issues and defensive problems lead to a boring offense, of course…

That second one is offensive zone scoring-chance generating plays per game. Again, all this = boring hockey.

BONUS: this is amazing

Frankly, I can’t see how this won’t win the Academy’s Best Animated Short Film of 2018.

High quality visuals, a beautiful, thought provoking storyline – this one has it all.

Note: Thanks to Ryan Biech, the best gif-maker in the universe, for his help with this post