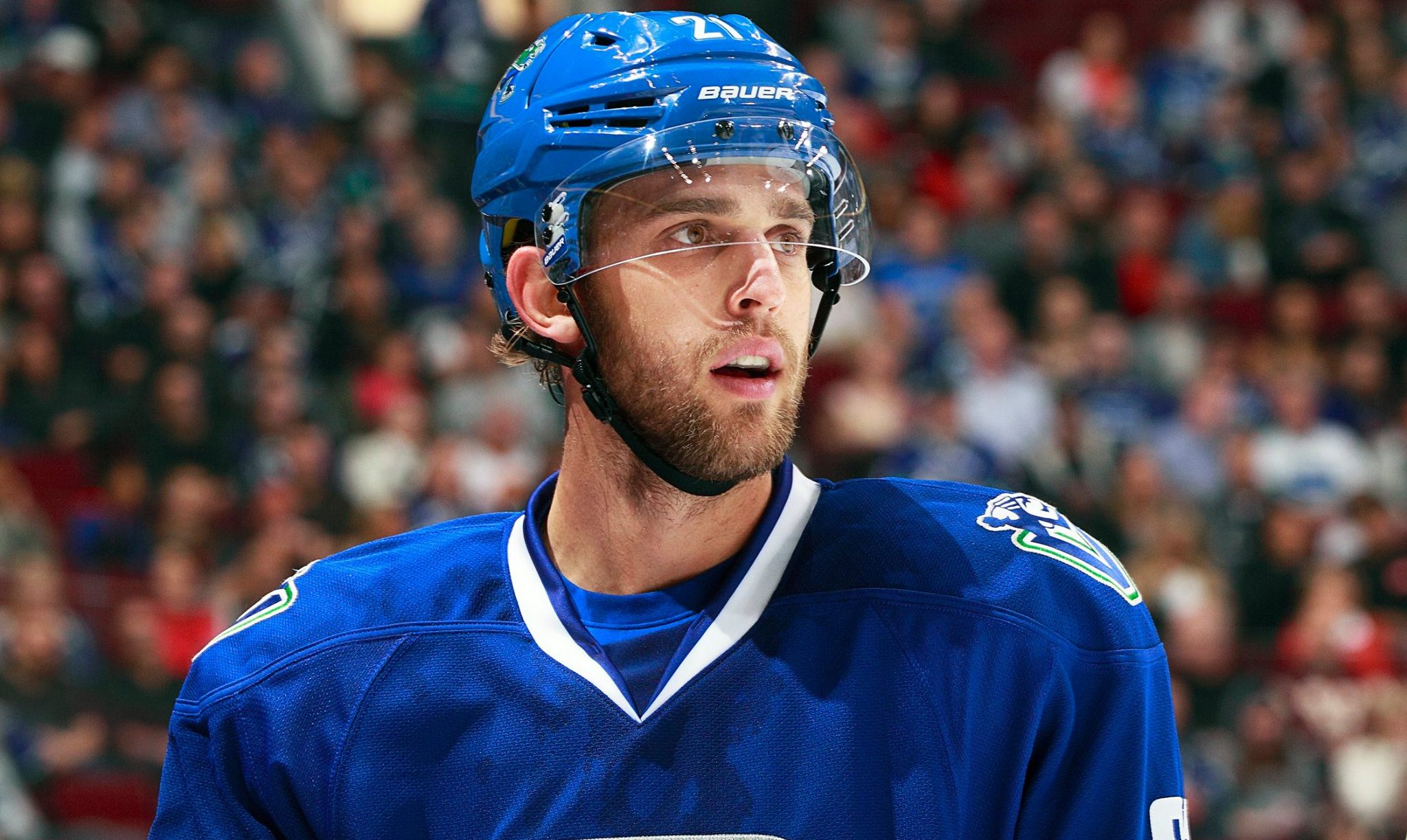 Brandon Sutter does not befit the Sutter name.

That’s what I got from an article Jeff Paterson wrote a week ago. In it, Paterson argued Sutter doesn’t bring “snarl” to his game the way Sutters of the past did.

The article highlighted how Sutter has yet to serve a single penalty minute this season – a sharp contrast to his uncles’ (Brian, Duane, Ron and Rich) 200-plus PIM seasons, and father’s (Brent) 100-plus season.

Brandon, meanwhile, has topped the 20-PIM mark only twice in eight seasons, with 25 and 21 minutes being his high-water marks and three seasons under five.

Reading Paterson’s article, I couldn’t help but wonder if Jim Benning had a touch of historical-Sutter bias when he traded for the latest player in the legendary hockey family.

Were Benning and Willie Desjardins hoping Sutter would bring that snarl and leadership to the Canucks dressing room, the same way those in his family had before him?

While there’s no way of getting into Benning’s head, one thing we can do is look at what he said about Sutter in the immediate aftermath of the trade.

What Benning thought he was getting in Sutter

Speaking on a conference call with reporters after trading Nick Bonino and Adam Clendening for Sutter, Benning said the following (in the Vancouver Sun):

“To me, he is a foundation piece for our group going forward,”

“He can play a good two-way game. He brings us speed, he goes to the net hard, and I thought in the playoffs for Pittsburgh last year he was really good. He is a playoff player. When the games mean something that is when he is at his best.”

“I think the West has gotten real fast …

“There are teams that are built one of two ways. There are big, strong physical teams that control the puck and play a heavy game and then the other thing we have seen in the last couple of years is real fast teams that play with speed.

“So I think Brandon is going to help us out in that area. He is a good skater, he gets in on the forecheck so he will help with our overall team speed.”

Sportsnet picked out some other quotes from that call:

“He has high-end intangibles and we’re going to have some young players that are going to make our team over the next few years along with Bo Horvat, so Brandon will be the leader of that younger group.”

“When the games mean something that’s when he’s at his best,”

“Brandon is a proven NHL player. He’s a matchup player and has played against the other team’s top players and has shut them down. He can still bring offense to our team.”

Benning’s strongest words for Sutter were spoken to the Vancouver Sun’s Iain MacIntyre, in a one-on-one:

“You win with players like Brandon Sutter. I’m not comparing him to Patrice Bergeron, but when I was in Boston, Bergeron was a great two-way player for us.

“Look at Jonathan Toews (in Chicago). That’s how you win in the playoffs. When we look at Brandon Sutter and all the things he brings, he’s going to be in our next wave of core players. I believe his best hockey is still ahead of him.”

While these quotes don’t scream of the rough-and-tumble Brent, Duane, Rich and Ron Sutter, they do show Benning thought highly of Brandon that he put his name in the same sentence as Toews’ and Bergeron’s.

At the time of the trade, Benning might have looked at the following numbers to make his case for Sutter.

Sutter’s regular season per 60 totals, extrapolated over an 82-game schedule: 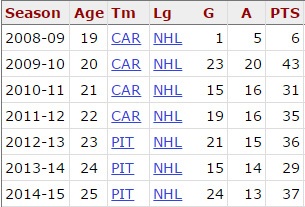 While the three seasons on pace for 20-goals stand out, the rest of the numbers are solid numbers for a second=/third-line centre.

From his quotes, Benning was clearly enamoured by Sutter’s playoff performances:

Sutter’s shooting percentage over the course of his career is 10.4, so either that year was an outlier, or Sutter stepped up and became “clutch” that year, making Benning’s assessment of him being a playoff performer spot on.

What the Canucks got in Sutter

The amazing thing about the way Willie Desjardins uses Sutter is it appears to be based on either Benning’s scouting report, his two 20-goal seasons, or his one good year in the playoffs.

It can’t be based on his performance in Vancouver.

Here, you can see how Sutter has stacked up against his teammates in his 31 games this season.

And this one shows even strength goals-for percentage – how many goals have been scored for vs. against while the player is on the ice (the higher the number, the better).

The one thing in Sutter’s favour is he’s on pace for a 50-point season.

Of course, the fact he’s playing on the first unit power play has propped up that number as well. His even strength numbers aren’t impressive.

All this will make the following – playing time for Canucks forwards this season – even more confusing. 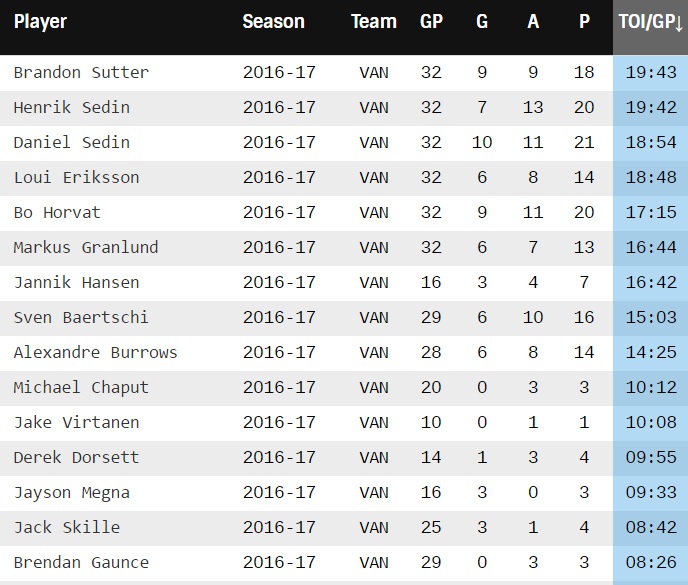 Through 32 games, Vancouver has utilized Sutter the way coaches before Desjardins used Ryan Kesler. He plays on the penalty kill, the first unit power play, and in a first/second line role at even strength.

Kesler, Toews, Bergeron – not the first names that come to mind when you watch Sutter play.

Even within the Canucks’ lineup, many fans would agree Bo Horvat is the team’s second-best centre.

So while it doesn’t look as if Vancouver thought they were getting an old-school Sutter in Brandon, the results show they thought he was, and probably still hope he’ll become, one of the elite centres in the game.