There are eleven games left in this season from hell for Vancouver fans.

Time for the Canucks to score some goals?

They lost 3-0 to St. Louis, meaning back-to-back shutouts, so all bets are off.

If you aren’t getting any of these references, you will once you read the rest of this post.

Have you give you some reason to read the SixPack, don’t we? You know as well as we do that the team’s not providing much.

When Canucks fans hear that Dave Randorf’s calling their game, an audible groan emits from Vancouver.

Sometimes I feel fans get caught up in their dislike of certain broadcasters. Take Bob Cole for instance – sure he gets some names wrong as he’s become older, thing is, close your eyes and you can tell exactly how intense any part of the game is just by the pitch of his voice. He’s a legend for a reason.

Then, before the puck even drops, he welcomes fans across Canada to “The Rogers Arena” for the game.

Six minutes into the game, he calls the Canucks’ newest player Dimitri Tryamkin.

My first thought was I must have heard wrong. Replayed it quickly, nope, he said Dimitri – maybe I’m wrong since it’s only his third game?

A couple minutes later, Sportsnet has a visual on Nikita Tryamkin… yeah, I had his name right.

Halfway through the third period Randorf calls him Dimitri again.

Thought they were done there? Sportsnet messed with us even harder with this “empty net” shot. 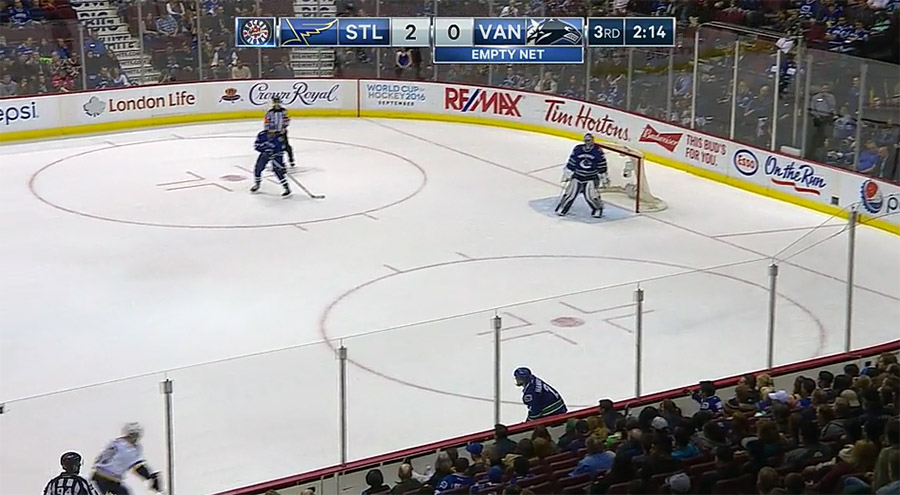 Is there a goalie standing there or am I hallucinating?

What follows is not a joke. It’s real. I’m not sure we’ve ever seen it before, but you have to believe me, it’s real.

Daniel Sedin: “From some guys right now, the effort is not there. I think those guys know who they are. I think it’s embarrassing.”

Yes, that was a Sedin calling out his teammates, just saying it like it is.

You know how we always hear how important it is to have a “winning culture” when developing young players? How important the Sedins will be to Vancouver’s rebuild?

This is it right here. This’ll help Virtanen, McCann and the rest more than Andrew Ference and old Ryan Smyth could help Hall and Eberle in Edmonton.

When you have the best players the franchise has ever had (and most PC) calling you out, it makes a difference.

More evidence of the Sedins’ frustration – have you ever seen Henrik say eff it to his teammates and do it himself like this?

Crazy thing is this was one of two or three times Hank looked as if he was done passing to his teammates in the game, instead protecting it himself, twisting and turning away from opponents.

On HNIC’s post-game discussion, Elliotte Friedman suggested it would make sense that the Sedins would at least approach management about the potential of leaving the Canucks this summer.

Judging by how entrenched they are in Vancouver, I’ve always thought any talk about trading the Sedins is a waste of time, but 11 more games of this?

3. Why the twins were angry

Wondering who the Sedins were calling out? I don’t have a full list, but let’s start with Terasenko’s 2-0 goal.

Watch as Stastny, Terasenko and Lehtera skate in on what starts as a 3-on-4 rush.

Unfortunately for the Canucks, the on-4 part of that rush disintigrates.

Watch it again – whichever way that rebound had gone, a Blue would’ve been on it – all three were open, untouched.

4. Let’s call a Nikita a Nikita

The hype was one thing, but calling Tryamkin the saviour after three games… it’s a bit much.

Many of you’ve played hockey at different levels. Remember that completely immobile defenceman who was your teammate at one point? The guy or girl who said, “Don’t worry, I’ll cover the front of the net” and proceeded to watch as players easily skated around them and scored, while you and your teammates were actually marking opponents?

Let’s be fair – it was only his third game, but Tryamkin spent more shifts standing in front of his net watching than he did making plays.

Here’s a play he did make, stopping Scottie Upshall from getting to the puck. Do note all he does is stand there and be impossible to get around because of his size.

On a night when every Canuck had negative corsi stats, Tryamkin was the team’s worst skater at minus-16. His partner Hamhuis was at minus-9, so he did quite a bit worse.

Chris Higgins didn’t have an epic return to the Canucks, but he was the fourth-best forward in corsi plus-minus.

He also made one drive to the net during the first that was reminiscent of Higgins 2011, nearly scoring.

He’s back. An American, who couldn’t forget… those points left behind. @TronArmy #Canucks pic.twitter.com/GlZqK5tS0p

6. What did Benning mean?

“We’re going to shift our focus in our market to drafting well and developing our own players,” Benning said. “We’re going to sign some younger players we’ve had in the system before, and we’re going to get younger and continue to get faster and hopefully be more competitive.”

I asked my followers for help.

Or he could simply mean this, and signing Anton Rodin, of course.

@omarcanuck Maybe they won’t be going after big ufa and spending to cap next season.

Remember that post-game HNIC discussion I referred to earlier where the guys discussed the possibility of the Sedins leaving?

Funny thing is it started with Friedman hesitating, saying, “Everytime I say something about Vancouver, my phone starts ringing.”

In case you don’t know what he’s referring to, Linden, when asked/grilled at a Town Hall meeting about the reports Vancouver could’ve made a deal with Chicago, replied “I spoke to Elliotte about what he wrote in 30 thoughts.”

The Canucks are a mess. pic.twitter.com/6tUXSH6EuM