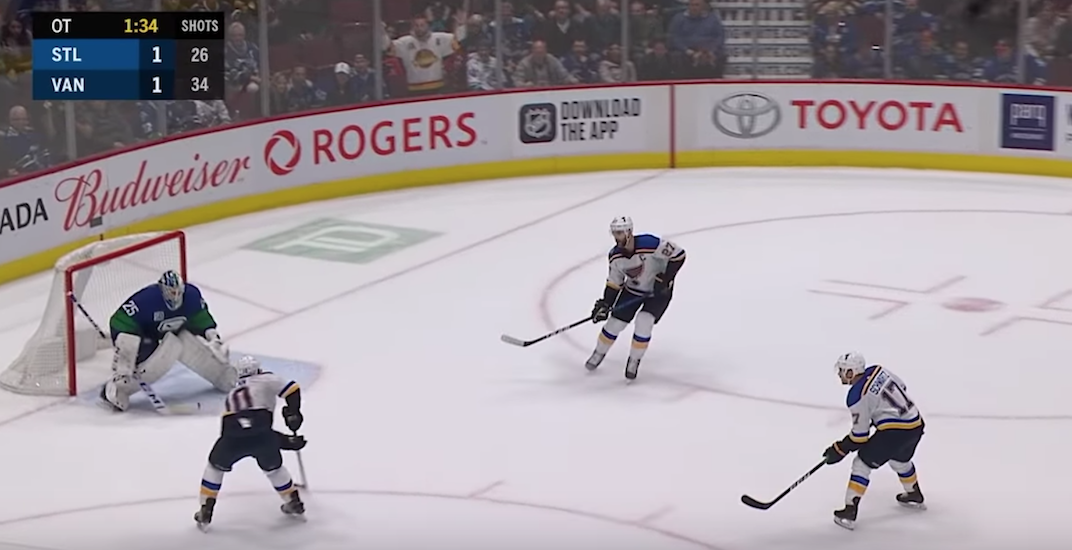 Vancouver Canucks fans may have witnessed a bit of history last night at Rogers Arena.

As if 3-on-3 overtime wasn’t hard enough on goaltenders, the Canucks gave up a three-man breakaway to the St. Louis Blues.

After a Tyler Myers wrist shot missed the net, the race was on, but the Canucks stumbled out of the gate. Myers lost an edge and fell, wiping out Canucks teammate JT Miller in the corner. The humanity lying on the ice slowed down captain Bo Horvat, who was also tired at the end of a shift.

The result was a rare 3-on-0 for the Blues — something I’m not sure we’ve ever seen in 3-on-3 overtime before.

The Blues took full advantage, as Brayden Schenn settled the puck before passing to Alex Pietrangelo, who set up Jaden Schwartz for the tic-tac-toe game-winner.

Markstrom broke his stick on the net in disgust.

Many fans have suggested that Markstrom should have purposely dislodged the net and taken the penalty, though as Joey Kenward astutely points out, the NHL recently changed the rule for such a situation. Purposely knocking the net off in this case would have resulted in an automatic goal being awarded to St. Louis.

For all those wondering when they read this hypothetical after last night’s #Canucks game…there was a rule change made in NHL this past summer….https://t.co/gJjl9y63Rs pic.twitter.com/DyALQ5IVvn

Despite the 2-1 loss, Canucks head coach Travis Green was feeling positive about his team’s play. And he should.

Vancouver outplayed the Stanley Cup champs for most of the night and probably deserved a better fate. The Blues didn’t take the Canucks lightly, and Vancouver responded well to their physical style of game.

“That’s a heavy team and they know how to win. If you want to win a Stanley Cup, you have to play some heavy games. I thought that was maybe the most physical game we’ve been in this season.”

Still, all fans could talk about after the game was that wild finish.

“Yep that’s me, Jacob Markstrom. You’re probably wondering how I got here” pic.twitter.com/zRONpbHw8Q

Tyler Myers takes out his entire team in OT causing a 3 on 0.

Hope his contract came with a clause that gives Markstrom more sticks. pic.twitter.com/y6FN9yGw90

Markstrom vs the Blues in OT #Canucks pic.twitter.com/vXwO6ko7E0

#Canucks I know how ya feel Markstrom pic.twitter.com/8w7Dzau7eS

We are all Markstrom #canucks

Why does this feel like the 2nd game of a playoff series. One things for sure #Canucks look built for the playoffs.

That didn’t end the way I thought it would. Ever. #Canucks

Good ole 3 on 3 overtime. #Canucks got a point so i ain't mad. That was pretty hilarious.