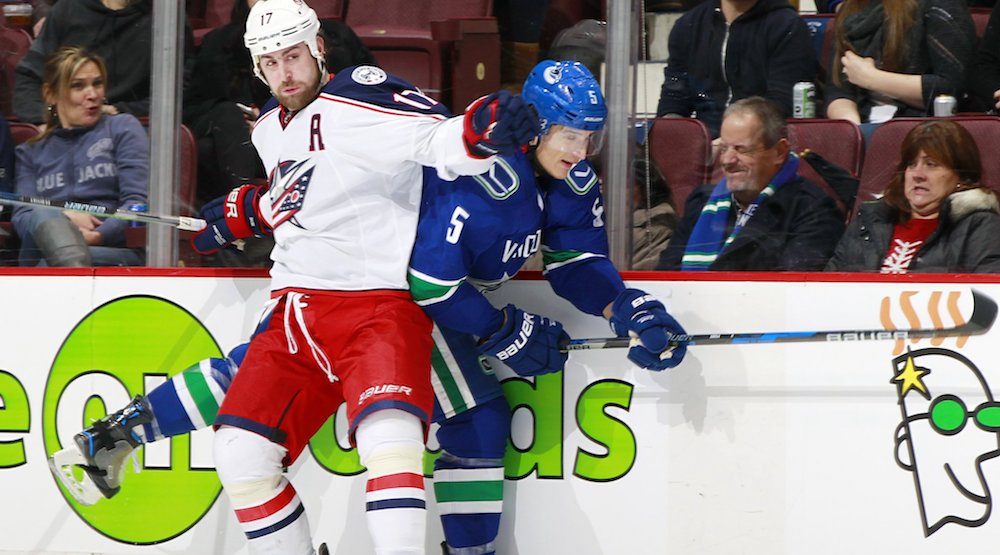 With snow falling all day long, it wasn’t easy for Vancouverites to get to the game with the city’s no snow-plow policy. Not sure residents know what snow tires are either.

That results in hibernation.

And with the Canucks down 2-0 and shots on net 14-9 through two periods, it looked as if those who’d put in the effort weren’t going to be rewarded by a fun game.

Except for those who’d come to see their favourite coach collect his 500th NHL win, of course.

Who you got @TronArmy? #canucks Willie vs #bluejackets Torts… pic.twitter.com/V8RL04nvsl

At home, it looked as if Omar the Audio Guy would be the highlight of the game (I’ll get to that later).

Then the third period came along. Four goals were scored, and the game went to overtime. In the end, Torts got his 500th win – 4-3 in OT. But don’t forget who played a huge part in his success Vancouver.

First, you guys and your undying support of this team: Torts got 36 of those 500 wins behind the bench in Vancouver.

Remember that year? Tortorella forced the Sedins to block shots, ground them and Kesler into the ground playing them like they were 25, benched Luongo in the Heritage Classic, tried to fight Bob Hartley, and after he was fired, went down swinging, calling the Canucks core “stale”.

The Sedin line had a decent night that was very close to a serious throwback night.

Daniel had the tying 2-2 goal.

After the Blue Jackets took a 3-2 lead, Hansen tied it up at 3-3 with just over a minute left.

And they even managed to snag the unicorn, with Sutter scoring on the power play to start the comeback charge.

That Sutter goal – that’s the reason Willie’s been so patient with him on the first unit – his quick, right handed shot that’s supposed to collect all rebounds and put them all top corner. Anyone think this means more Sutter on the first unit power play?

Anyone think Sutter’s scoring proficiency has anything to do with his always excessive deployment?

Anyway, the reason I said the Sedins could’ve had a better night – they had this chance early in the first period.

Honestly, I’m still wondering if Henrik was trying to pass the puck back to Daniel instead of going for the open net.

Then in overtime, Daniel started with Sutter and Tanev and long after the other two had changed he was still out there on a two-on-one with Hutton.

Hutton missed the net, Daniel and Hutton were caught deep, and Henrik was stuck playing the 2-on-1 at the defensive end.

Hank ended up looking like a forward caught on defence.

So the Sedins turned what could’ve been a vintage night into an OK night. Still, when was the last time a highlight pack almost completely revolved around the Sedins?

Pretty sure Hansen’s made them relevant again in the span of a week.

Imagine if the Canucks used Horvat the way they use Sutter?

He’d lead Vancouver’s forwards in minutes on many nights and he’d be playing on the first power play unit. In the past two games alone, he’d have taken 66.67 and 58.33 percent o-zone starts, instead of his own 50 and 28.57.

In the real world (aka Willie’s world), Horvat just went through a six-game stretch without a point. Stretches like those would be hard to fathom if he was being played as the team’s offensive center behind Henrik, with Sutter taking on the defensive role – which is what he was said to be when signed.

For a team fighting for every win and a coach fighting for his job, the Sutter-love is almost impossible to explain.

@omarcanuck maximizing chance for Benning’s trade to look good and minimize Bo’s chance to cash in on contract. Willie is Jims lackey.

@omarcanuck well, one’s a foundational piece. The other a defensive specialist.

In Willie’s world, that seems to be the case.

If Horvat was used how Sutter is now, he’d probably lead the team in points.

The one thing you can say for the team is this deployment could bring down Horvat’s bargaining power on a new contract.

That’s not exactly rocket science, and it’s as old-school-hockey as it gets (apparently Pat Quinn used to do this to players in contract years), so maybe that’s the plan?

Before the game, Vancouver announced Erik Gudbranson will be undergoing wrist surgery.

Guy on when Erik got hurt : “No specific time but it continues to get worse so the time is now to get it fixed.” #Canucks

Guy says there were no other options at this time other than surgery to get the wrist fixed. #Gudbranson #Canucks

Interesting to me: it’s been an ongoing issue that’s become worse with time.

Benning: Gudbranson was playing with tip of his right index finger broken and pain in his right wrist got worse last few weeks.” #Canucks

What it makes me wonder is would Gudbranson have had surgery sooner if he weren’t eligible for a contract extension on January 1?

4. The effect on Hutton

For Vancouver, Gudbranson hasn’t exactly been the defensive saviour he was supposed to be when the trade was made this summer. Still, it’s tough to know how much his absence will hurt the team.

One player it should help: Ben Hutton.

Hutton’s corsi-for percentage playing with Gudbranson has been 47.4 percent.

With all other defencemen Hutton’s played 200 minutes or more with, he’s been better. Weber: 50.2 percent. Tanev: 50 percent.

Against Columbus Hutton was a corsi minus-4 and Tanev was minus-8. That’s a tiny sample size to look at these stats, and they also had some strong shifts in the offensive end.

It’ll be interesting to watch how Hutton performs with Tanev over the next few weeks, and to know if Gudbranson was bringing him down.

Apparently Vancouver hasn’t been the only city hit by snow, as Sportsnet’s Colby Armstrong didn’t make it to the studio in time for the second period intermission.

In his place sat “Omar the Audio Guy”.

Jeff Marek: What do you think of the game, Omar?

New Omar made me realize I could learn a lot from him.

Rob the Hockey Guy: In the form of a SixPack article, tell me, what did you think of the game, Omar?

Rob sometimes tells me and Wyatt to shorten the SixPacks so maybe he’d go for this?

Sure the Canucks lost, but at least the game was entertaining.

Here’s Miller making a great save in the first period.

And here’s Jim Benning’s face when Stecher got hit in the face with a puck.

Don’t worry Jim and everyone who cares about the Canucks at all – Stecher came back minutes later and was fine.

Note: Thanks to Ryan for all his help with the gifs in today’s post