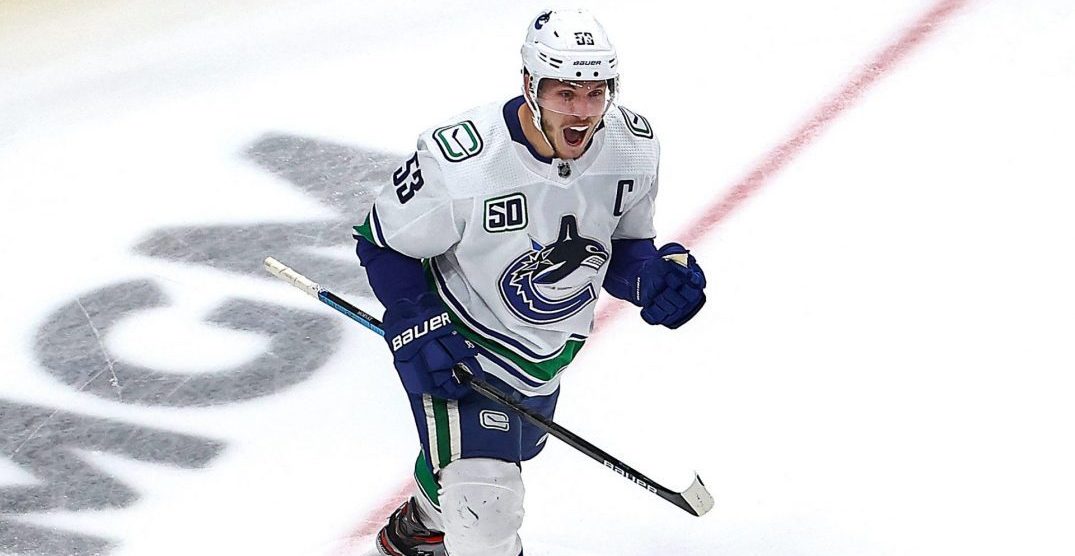 You knew that Elias Pettersson wouldn’t be silenced for two nights in a row.

Pettersson and Tyler Toffoli, who made a triumphant return to the line-up, had a combined six points as the Vancouver Canucks won 5-2 to tie their second-round series against the Vegas Golden Knights 1-1.

It took Toffoli all of nine seconds on the ice to score, as Pettersson set him up for an open-net goal just 1:29 into the game.

Playing with Elias Pettersson looks like a good time pic.twitter.com/8GurxXwKC7

Nine seconds. Nine seconds into his first game back, @tytoff16 did this 👇 and we did this 🕺💃🎉! pic.twitter.com/n8FqEUra06

Later in the contest, Pettersson stole the show once again with a highlight-reel goal in the second period.

(love to describe this, but there are no words)@_EPettersson 🧙‍♂️🚨😍 pic.twitter.com/hJ4efrJ7g5

During a night where the Canucks were dominated at five-on-five, Pettersson was the only Canucks forward to post a positive shot-differential. He certainly made a difference with two even-strength points and a power play assist on the night.

Maybe Pettersson should have received an assist for this glove toss to Golden Knights defenceman Shea Theodore as well.

Is there a more likeable player in the NHL than Elias Pettersson? #Canucks pic.twitter.com/vC94rBZdOC

It was an absolutely dominant period from the Golden Knights after they were outshot in the first period and left in a 2-0 deficit.

Alex Tuch scored the lone Vegas goal during the second, but Markstrom kept the Canucks alive with 21 saves in the middle frame.

It wasn’t a great contest for the other Swedish goaltender in this contest, Robin Lehner, after he allowed four goals on 26 shots. However, his defence hung him out to dry on all three of the even-strength markers.

Captain Bo Horvat played a crucial part in ruining Lehner’s night. He would seal the victory early in the third period with his second goal of the night, giving the Canucks a 4-1 lead.

Strong start to the 3rd: ✅ pic.twitter.com/Qlqh4O26Ez

“Whether its scoring goals or taking faceoffs, I’m trying to do my part to help this team win,” Horvat said following the game. “I’ve been fortunate enough to put the puck in the back of the net, and obviously it’s great for us to win some games.”

Horvat now leads the playoffs in goals with eight, after scoring a power play goal in the first period to go along with his third period marker.

He went pointless in five games before this contest after scoring six goals in the Canucks first seven games.

Max Pacioretty scored a goal for Vegas with the goalie pulled to make it 4-2, but Pearson’s empty netter gave the Canucks a 5-2 victory.

Markstrom was stellar once again, making 38 saves in the victory.

In the Golden Knights crease, there will be an interesting decision for head coach Peter DeBoer to make in Game 3, with three-time Stanley Cup champion Marc-Andre Fleury warming the bench. The 35-year-old goalie made headlines earlier this week when his agent, Allan Walsh, posted a photo of Fleury with a sword through his back, with Deboer’s name etched in the sword.

That’s a storyline for Game 3. However, the main focus tonight was the dominant performance from Pettersson and the notable return of Toffoli.

“I’ve been wanting to play for a while now,” Toffoli said following the game. “It was tough but at the same time [the Canucks] are winning games, giving me more time to rest up and heal and get back into the line-up.”

After being inserted on Pettersson’s line alongside his old Los Angeles Kings’ linemate Pearson, Toffoli acknowledged that the trio was feeling good ahead of Game 2.

“You want to do whatever you can to help the team win, especially in the playoffs. I feel like we were confident coming into the game tonight, and we were doing good things.”

Toffoli, being the grizzled playoff veteran that he is, knows that the Canucks can’t get ahead of themselves after this win.

“It’s short term memory, we lost Game 1, we forget about that, now we win Game 2 and we just have to keep moving on.”

Travis Green noted that the Canucks needed much better performance in Game 2.

“One thing about our group is you can be honest with them,” Travis Green said following the game. “I think we’ve done that all year, we do it all the time. we just didn’t play very well last game, and I like that we responded with a better game and evened the series.

“We needed to get a win tonight.”