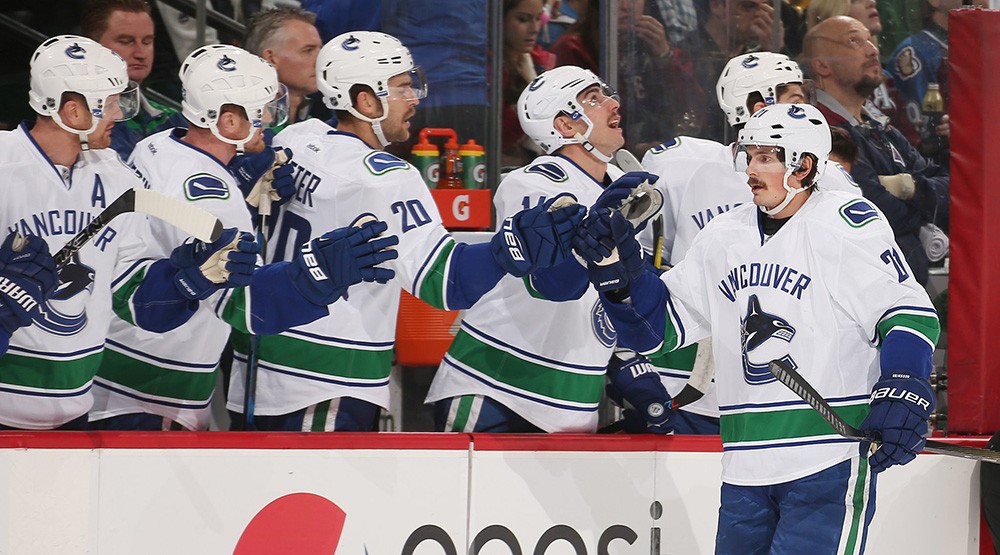 Did the Canucks deserve that win?

Horvat and Burrows did. Markstrom definitely did. The defence, who played a five man rotation after Edler went down early in the first, did.

Even those who didn’t score – the Sedins, Sutter, all those Utica call ups – the players worked hard and deserved the W.

But with five minutes left in the third, in a tie game, the Canucks were still rolling out these three forward lines:

On one of those last few shifts, Eriksson twice tried to set Chaput up, only to see the pass not received, the chances missed. That’s a your massive off-season signing nullified.

In the last minute of regulation, Brandon Sutter goes in to help the Sedins forecheck, loses the puck. That’s your top line nullified.

The lines left the Burrows-Horvat combo intact, but is that the priority? At this point Horvat can carry wingers. Get him a finisher, he’ll get that guy the puck (that finisher I’m thinking of – his first name rhymes with moo-ee).

The Sedins, though – they need someone who does his part in the cycle. Who forechecks and gets them the puck.

With Hansen out, Burr is the best option.

Sutter, by the way, had a minus-7 corsi, while Henrik and Daniel were minus-2 and 0. He’s not doing his part.

And to anyone who says you can’t break up the one line that’s going – you can and should if it means getting the Sedins going. They’re the key to this team’s success.

So the coach may have a new nickname…

All I’m saying is it shouldn’t have taken a shootout to win this game. Vancouver had a power play in overtime but had Sutter on with the Sedins instead of their leading scorer. Really, they should’ve won in regulation.

Anyways, Vancouver did get the W, they won 3-2 in a shootout, so you can celebrate that. Let’s talk about how it all went down.

Alex Edler disappeared from the game early in the first period.

Edler not on the Canucks’ bench. Broke all his sticks and is done for the night.

Joke of the week right there, maybe month, but sadly the news was more concerning.

Edler was injured when he blocked a shot off his wrist/hand, and he never came back. The good news is Tanev’s return is apparently imminent.

With the five remaining defencemen left to pick up the pieces, Hutton played 26 minutes, Tryamkin 20, and the rest fell somewhere in between. It was a gutsy effort by all of them, and at the end, one thing jumped off the stats sheet – Tryamkin had a plus-5 corsi, while no one else on the team was above 0.

Do note that Tryamkin had 67% o-zone starts, though. Clearly he was being protected.

Still, offensive plays like this will lead to more corsi-positive and point-producing nights.

That’s 88 going to the net and directing a backhand shot on net, off a Henrik Sedin pass… hell of a skilled play from the big man.

As I said earlier, Markstrom fought his ass off for this win.

Here he was putting his body in harms way to rob the Avs of great chance in the second period.

When Colorado tied up the game in the second, he put everything he had into arguing a hand pass.

Either that or he was giving the refs a peice of his mind.

And in overtime and the shootout, he went into all out Carey Price mode. Here, he robbed Duchene with the glove.

Then in the shootout he stopped all three shooters, allowing Granlund’s goal to be the winner.

Wait, maybe he was telling the ref he likes juggling?

We haven’t seen much of this, but Eriksson showed some serious sniping ability on this goal.

Oh that’s how he reached 30 goals twice in his career.

Like, say, this crazy, sick, Hank-like pass by Horvat that set Burrows up for his goal.

With Bo Horvat establishing himself as a legit #2 center, Burrows playing like he did four years ago, and Jannik Hansen and Anton Rodin returning to the lineup soon, the Canucks could find themselves with a decent looking top two lines.

Top three lines, even, if it looks like this:

And when Tanev returns, with Tryamkin and Stecher proving they belong, the D is starting to look better than average too.

If and when this materializes, you just know there will be lineup decisions that’ll leave us scratching our heads. Something tells me those three forward lines I’ve laid out that seem like no brainers won’t materialize.

Sutter may not play centre, Burrows may be bumped below Grandlund and Baertschi, Eriksson may never get a chance with Horvat – these are things that have happened and will happen again.

Many people who follow the Canucks closely have stuck to the line that Willie’s coaching the roster he’s been given, and another coach couldn’t do much better. Now when you think of the healthy lineup above, isn’t that short-selling the players in a big way?

At some point you have to think about the immediate difference another coach would make.

At some point you have to think about giving the Sedins, Burrows, Hansen, Tanev and Edler a decent chance at the playoffs, maybe even a short run, before their time together is done, don’t you?

Or you keep denying that things could be better. Not my call.

JPat had an interesting article in the Province today. In it, he talked with the Sedins about how the days of freewheeling hockey are gone.

The twins were mostly talking about the structure all their opponents play with now, but as I read each quote, I couldn’t help wondering if they were talking about how their own team’s structure has affected them.

“Teams used to turn the pucks over and it was up to the D to defend,” he says. “Now it’s up to the five guys. A lot of times when teams are getting a shot at your net, they’re already thinking about defending so that when you get the puck back you have to beat five guys.”

Is Henrik talking about other “teams” or his own?

In late October, Erik Gudbranson, talking about the change in systems from Florida to Vancouver, said while he was used to holding the blue line with the Panthers, in Vancouver, he holds the “dot line”, and the forwards come all the way back to play defence.

At another point in the article, Daniel actually talked about how he has to be responsible on offence:

“For the other team not to get odd-man rushes, you have to dump it in and play it safe,” Daniel says. “You can’t take any chances.”

Don’t know if you see it the same way, but to me Daniel’s taking a veiled shot at the system here, or at least saying it’s hard to score when he has to be so responsible defensively all the time.

One more thought – last season Pittsburgh’s struggles to create offense under coach Mike Johnston were attributed to the way he was making his forwards come way back into their own end to get the puck. It nullified the abilities of players like Crosby and Malkin.

Really hope you stuck to the SixPack long enough to get to this, because the HNIC guys had plenty to say today.

In the second intermission, Elliotte Friedman dropped this bomb:

“I’ve been hearing that Buffalo’s been watching the AHL team Utica quite a bit. I don’t know if that means they’re looking at Virtanen or what they’re doing.”

He continued, saying he doesn’t think Virtanen for Kane would be enough.

So are the Kane trade talks as dead as we’ve been led to believe?

Quick update, FWIW, my understanding is whatever dialogue VAN/BUF had on Evander Kane, and there was talk, it’s no longer being pursued.

The way Bob McKenzie tweeted this was always fishy to me.

Two days after the rumours went public, Benning confirmed Vancouver would be willing to move a defenceman to get a scorer. At that point, Canucks fans were in a frenzy, most fearing what the team was about to do, many ready to fire the GM right then and there.

Hours later, McKenzie says the Canucks are out. Someone wanted those rumours doused.

Anyways, I’ll leave that for you to think about. The panel also talked about Vancouver’s aims to sign Bo Horvat long term.

“They’ve been pretty clear about it this week – they want to sign Horvat to a long term extension. If I was them, that’s exactly what I’d want to do too. I just think if you’re Bo Horvat and his agents, are you going long term? We’ll give a couple of examples, I looked around for comparables (shows Victor Rask’s $4.0M AAV and Rickard Rakell’s 3.85 AAV).

These are two guys who in terms of points per game over the first three years in career are very similar. Rask and Rakell both signed for six years for $4-million and just under $4-million. But when you look at year three, Horvat’s points per game goes up …

There’s an opportunity for him to be a top offensive player if you look at where the lineup is going. I can see a situation where Horvat or the agents think ‘bridge’ because we think we’re going to be even bigger in terms of offensive numbers in 2 years.”

Definitely some interesting stuff to think about as Vancouver tries to sign Horvat.

More interesting, though, was Nick Kypreos’ comments right after:

“I don’t really understand why Benning would volunteer this information when nobody was really fishing for it. You love his honesty but did he really have to mention that it’s a long term deal he wants?

If I’m in the camp of Horvat, I’m licking my chops now saying we’ve got a chance to skip a bridge deal.”

Good point by Kypreos: in any negotiation you need to use every point of leverage you have, and term is one of the biggest bargaining chips/points of contention. The Canucks have already given that one up, and negotiations haven’t even started.

They did get that W, though. That, you can celebrate.

Note: Thanks to Ryan Biech for his gracious help with the gifs in today’s SixPack