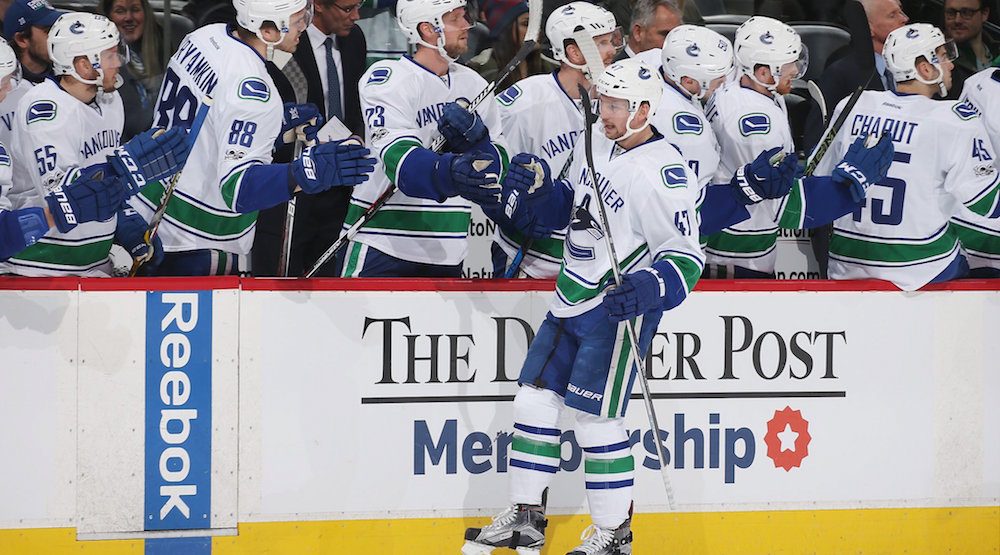 Matched up against the worst team in the NHL (by far), the Vancouver Canucks were a rare favourite to win on the road.

Sure, it took a late power play goal for the Canucks to edge the Avalanche 3-2, but they controlled play for most of the game. It never really felt out of their control.

By the end of the night, it was 30 saves for Jacob Markstrom, two goals for Sven Baertschi, and another win for the Canucks, now 9-2-3 since Christmas. Did I mention the win moved them into a playoff spot?

The Canucks were sluggish in the first few minutes of the game, but luckily Markstrom was not. He made a couple key saves early to hold the fort while the team found their legs.

Generating shots hasn’t been the Canucks’ forte this season, but against the Avs? No problem.

They sent 20 shots on goal in the first period alone, which isn’t that much lower than their per-game average of 27.6 this season.

Only one of those 20 shots beat Calvin Pickard; a Baertschi backhander that gave the Canucks a 1-0 lead after the first.

Great power move by Bo Horvat to drive from the corner and take it to the net. Loses control, but sucks in 3 #Avs & opens up space. #Canucks pic.twitter.com/KL2Jpt5V2a

Colorado’s blueline isn’t exactly sparkling even on a good day, but without their top two defencemen it’s downright awful.

With Erik Johnson and Tyson Barrie both out of the lineup, the Avs top pairing is Francois Beauchemin and Cody Goloubef.

Beauchemin is 36 years-old, and Goloubef cleared waivers this season. Need I say more?

Anyways, bad defence traditionally leads to scoring chances for the opposition, and the Canucks were beneficiaries on multiple occasions in this game.

Perhaps the most prevalent example was when Markus Granlund stole the puck from Nikita Zadorov and swiftly snuck it past an unaware Pickard.

There would be more chances, like Nikita Tryamkin’s glorious opportunity on a 2-on-1.

It would have been the third goal of his career and certainly the nicest. But Pickard’s right pad had to ruin everything. He was good in this one.

Markstrom was good too, and he bailed out Tryamkin later in the second with a nice stop of his own.

Markstrom has yet to record a shutout in his NHL career. In what is likely his last start before he turns 27 on January 31st, it would’ve made for a nice early birthday present.

Things were looking promising until late in the middle frame, when Mikko Rantanen broke the shutout bid.

You could blame the Canucks defence for letting Rantanen walk in unguarded. Or you could blame Jeff Paterson, who tweeted this moments before the goal.

The Canucks may have only had a one goal lead going into the third, but it really felt like they had this in the bag. After all, they outshot the Avalanche 31-19 in the first 40 minutes.

Things suddenly got real when the Avs got a flurry of shots early in the third. Eventually, a Matt Nieto shot snuck under the arm of Markstrom.

Just like that it was back to square one.

It wouldn’t be a SixPack without a section on the Canucks power play. But for once, it makes the cut for all the right reasons.

The Canucks didn’t get a power play until 51 minutes into the game, but they capitalized on their opportunity to take the lead.

It was Baertschi – not Sutter – in front of the net to finish off a tic-tac-toe play with the Sedin twins.

6. Hanging on for the win

After taking the lead, the Canucks went into shutdown mode and were able to stave off the Avs offence for the win.

Yes, it’s the worst team in the NHL, but it still says something that the Canucks were able to hang on for the win.

"It was nice to pull this one out, I wanted to be there for the guys. We needed a big road win and we got it." – Markstrom

Remember back to last season for a moment, when the Canucks seemingly couldn’t hold a lead if their season depended on it. They were last by a good margin when leading after two periods.

This season, the Canucks haven’t been getting leads as much, but when they do, they’ve usually been able to hold them. It’s actually quite refreshing.

The win tonight puts the Canucks into the playoff picture, now a point above Calgary for the second wild card spot.

The #Canucks passed the Flames in the standings and their 3 goals tonight came from Flames acquisitions (Granlund and Baertschi).

I’ll be the first to admit I never thought they’d be in the thick of the playoff hunt 49 games into the season.

The Canucks have one more game before the All-Star break. It’s another winnable game tomorrow at 6 pm PT in Arizona against the Coyotes. Another two points would really leave them sitting in a good spot heading into the break.