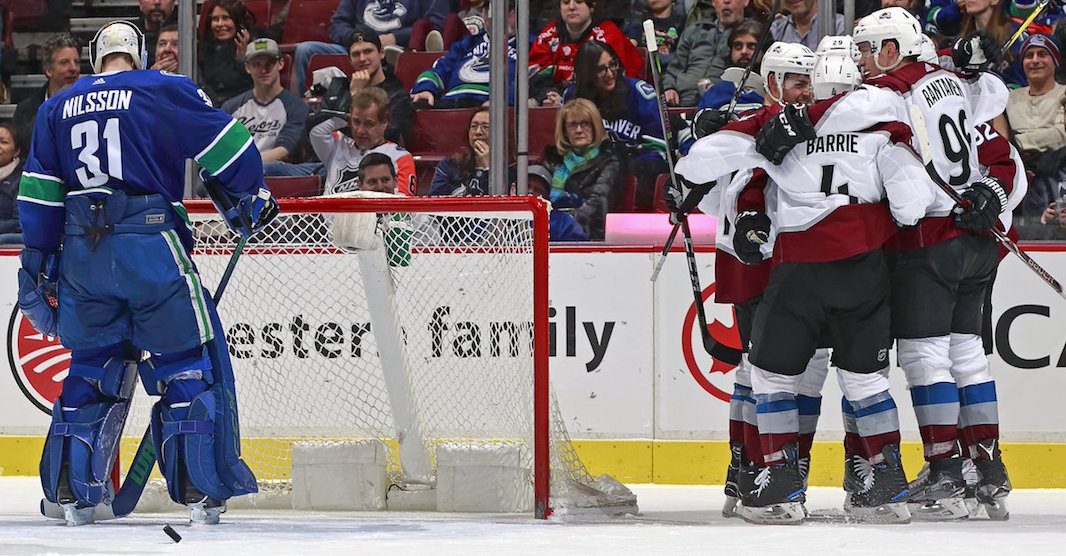 The Vancouver Canucks showed some good things in Tuesday’s game against the Colorado Avalanche.

The penalty kill was not one of those things.

It was a very bad thing, in fact.

The Canucks allowed five goals in this game, all of which came while playing a man short, including the overtime winner in an eventual 5-4 loss to the Avalanche.

In a season riddled with terrible penalty killing, Tuesday’s game was the worst of them all, as the Canucks allowed five power play goals on home ice for the first time in 28 years.

#Canucks penalty kill sure had a rough night in their loss to the #Avs– one that involved blowing a 4-1 lead & tying a franchise record for one home game pic.twitter.com/vsbmYl1QSg

The Canucks had a 4-1 lead at one point, but when you only kill one penalty out of six, it’s pretty hard to win a hockey game.

One-for-six on the penalty kill. Let that sink in for a moment.

It’s too bad, because the Canucks had a fantastic second period, and a real nice showing from Nikolay Goldobin, who is still trying to become an everyday player in the NHL.

It was a 1-1 game midway through the second when Goldobin had the best stretch of his young NHL career.

It started with the 22-year-old getting a rare opportunity on the power play, where he had some good puck movement with Derrick Pouliot before firing a shot past Semyon Varlamov to give the Canucks the lead.

On his very next shift, Goldobin helps Brandon Sutter create a turnover in the neutral zone, and Sutter eventually fires it home, giving Goldobin his second point in as many shifts.

Not long after, Goldobin created another great scoring chance. Unfortunately, this great pass went to Nic Dowd, who couldn’t even get a shot off.

That might’ve contributed to the decision of Travis Green to have Bo Horvat double shift in the third, taking Dowd’s spot with Goldobin and Jake Virtanen.

All the talk has been on Brock Boeser’s goal scoring this season, but Horvat has been quietly scoring with ease in his fourth NHL season.

Despite missing time with injury, that was Horvat’s 16th goal in 42 games this season. That’s a pace of 31 goals over a full 82-game schedule, well above the 20 he scored in 81 games last season.

Speaking of Boeser, it was his pass that set up the goal for his first point in three games. That means in 65 career games Boeser has still gone three games without a point just once.

It was also Boeser’s 50th point of the season.

If you’ve kept up with the SixPacks this season, you know I love me some Darren Archibald.

He’s just a great physical player to have in the lineup, and it’s good to see him getting rewarded for going to the net. He picked up his first goal of this season and second of his 22-game NHL career.

How about that one-handed pass from Brandon Sutter!

4. Nilsson perfect at even strength

It’s hard to blame Anders Nilsson for this loss despite letting in five goals, as all of them came on the man advantage.

Sure, there were a few he could’ve had, but he also stopped a few at even strength that looked to be sure goals, including this one in the second period.

As you can imagine, Canucks Twitter went into a frenzy, and as usual it was quite divided.

Some liked the deal:

Look at the physicality that the Canucks currently lack. I for one am optimistic that nobody will take a run at our stars like Boeser (and hopefully Peterson next season) with Guddy and Archibald around. He can get better after his “show me” contract year

And others just couldn’t believe it:

Personally, I think the actual contract value is not bad compared to what I was expecting, but I don’t agree with the decision.

To me, the smarter move would’ve been to trade him at the deadline for future assets, and sign another defenceman in free agency this summer. In my eyes, Gudbranson is a very replaceable player.

I think Daily Hive’s Grady Sas summed it up best:

My issue with the Gudbranson contract: the #Canucks could conceivably find his replacement on the UFA market for a cheaper price, while gaining assets. No need to overpay for who’s primary attributes are that he’s a “culture carrier” and “tough."

Here’s a few of the things GM Jim Benning had to say about Gudbranson shortly after the extension was announced Tuesday morning.

I asked #Canucks Benning what, in his opinion, makes Gudbranson tough to play against: pic.twitter.com/qoLbwxxn0H

Here's Jim Benning's answer when asked if Erik Gudbranson's underlying data is a concern to him at all. #Canucks pic.twitter.com/BcAFhCIK9I

Clearly, the selling point of Gudbranson to Benning is his toughness – his ability to make things harder on the opposition.

The question then, of course, is does he actually do that?

6. Is Gudbranson tough to play against?

I thought Gudbranson, and the Canucks as a whole, looked pretty solid at five-on-five against Colorado.

On the penalty kill however, it was a completely different story.

The Avalanche scored three goals in the second period – all of which came with the man advantage.

Gudbranson was on the ice for all three of those goals, so let’s look at each one and analyze what Gudbranson was doing (or not doing) on each play.

The first one was a point shot that squeaked past Nilsson, though it was deflected on the way through by No. 17, Tyson Jost.

As you can see, Gudbranson is right beside Jost when the shot is taken, but does not take the body nor tie up his stick, allowing Jost the time and space to get the deflection.

Not fully Gudbranson’s fault, but he definitely could’ve done more to prevent that goal.

This next one wasn’t on Gudbranson, it was a perfect shot from Mikko Rantanen on the left side Alex Edler is responsible for.

But if Rantanen were to instead slide this puck in front, Gabriel Landeskog likely would’ve tapped it in. Why? Because again, Gudbranson doesn’t establish very good body position, and doesn’t tie up the stick.

That last one is a breakdown from all four Canucks defenders, but again, Gudbranson doesn’t establish good position. He’s originally with Landeskog, but when Landeskog gives him a shove in front, he leaves his man to attack the puck carrier, though not in time to close the gap or block the shot.

Instead, the shot is tipped in by a now-unguarded Landeskog.

After another power play goal by Colorado (which Gudbranson was on the bench for) tied things up in the third and sent it to overtime, the Avs had yet another man advantage in the extra frame and – surprise – they scored.

A four-on-three is a lot tougher than five-on-four, but again Gudbranson just leaves Nathan Mackinnon open for a bit too long and can’t get across in time to block the shot.

Gudbranson doesn’t deserve full blame on any of these goals. After all, there are four players (three in the last one) out there on these penalty kills. The system is definitely an issue as well.

But on all of these goals you can see Gudbranson could’ve been doing more to make things tougher on his opponents, and you have to think at least one of them could’ve been prevented if he had done so.

Gudbranson and Edler were on the ice for 4:01 minutes of PK time in this game, by far the most among Canucks blueliners. The only other two who played on it were Troy Stecher and Michael Del Zotto, who had just 1:06 of PK time.

In those four minutes, Gudbranson and Edler were scored on four times.

That’s not good for a “shutdown player” who is supposed to be “hard to play against.”