You may find what I’m about to tell you less believable than an episode of the X-Files, but stay with me. If you make it through, it’ll be worth it.

Vancouver held on to a two-period one-goal lead.

Luca Sbisa looked like Erik Karlsson going end-to-end to set up a goal.

Vancouver stretched a two-period one-goal lead with Alex Edler and Brandon Sutter injured for the third.

I told you it was less believable than aliens and monsters.

Seriously, I’m still wondering if someone spiked that coffee I drank before the game.

Let’s just set the stage: the Canucks came out of the All Star Break looking like they’d be a better match for the Giants than any NHL team. In two games they gave up a lead to Columbus and they handed a regulation win to Calgary – two of the worst teams in the league.

They were also on a four-game losing streak.

Things were so dire that Willie resorted to putting together a line with no veterans against Colorado – Jake Virtanen, Bo Horvat, and Sven Baertschi.

You may think it was an easy call, but this was how comfortable Willie was feeling minutes into the game.

Next time you want Willie to play the kids more, remember this image and think about what it does to him for a second.

Honestly, it can’t be good for his recently-operated-on hip.

Moving on, you need to know this game was over in the first period if not for Markstrom.

The Canucks took three penalties in the period and ended it down two men, and Markstrom didn’t let one past him.

I could tell you he was dialed in but that doesn’t do it justice. Maybe his save percentage – .967 – will be more convincing.

One goal on 30 shots. He was Von Miller good.

Vancouver took over the game in the second. The Avs scored first, but the Canucks outshot them 11-5 at even strength and outscored them 2-1 in the period.

Even more remarkable – they didn’t fold after 40 minutes. Third period even-strength shot attempts were 14-13 for the Avs, meaning the Canucks kept pressing and avoided going into a defensive shell.

I know you don’t believe me, so here’s proof. 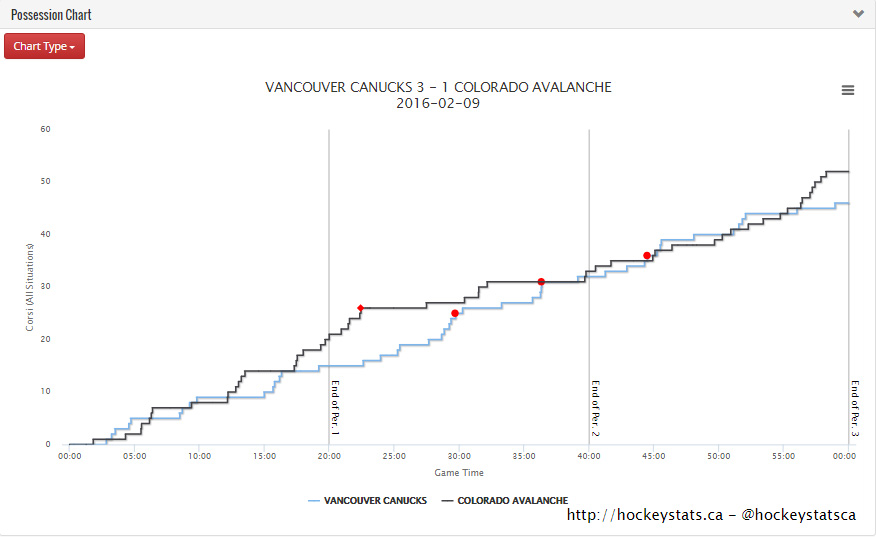 Honestly, it looked like it was going to be another typical night watching Sbisa.

During the first period I tweeted this gif of Sbisa skating over a Mario Kart banana peel, saying he skates like me.

Seriously, he was not impressed.

After the game, teammates were calling him Bobby Orr, according to Canucks Twitter.

And I still haven’t verified my coffee wasn’t spiked.

About my coffee being spiked… wouldn’t you say you can pretty much assume you’re high/drunk when you start hearing Super Mario Brothers sound effects while watching a hockey game?

A star landed on Bart’s head, he powered up, became invincible, and scored a goal.

It’s the best explanation I’ve come up with so far.

Bartkowski scores and Sbisa looks great on his assist. I think the Hockey Gods are a little early with April Fools. #Canucks

Or that. Crazy hockey gods.

5. Doing it for the moms

By now you must’ve heard the Canucks players’ moms are accompanying them on their current road trip. 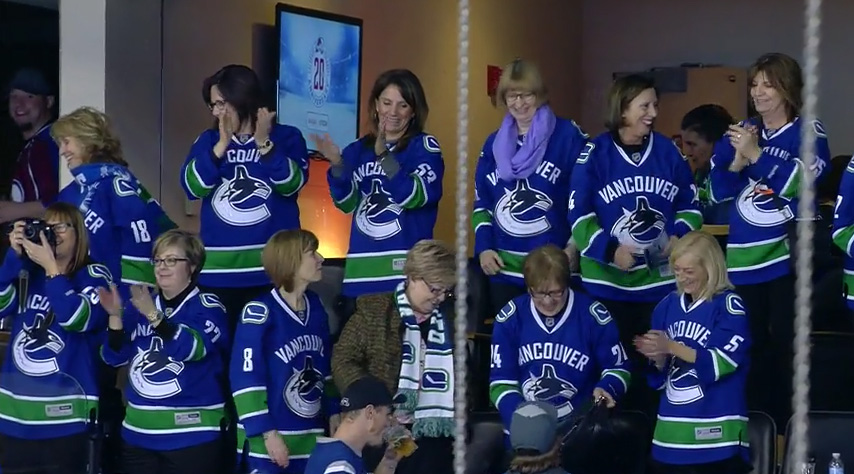 @omarcanuck Tanev has longer hair than his mom.

Now, if you haven’t seen the video of Ben Hutton’s mom doing the pre-game report, you should watch it.

She was good, but like Sbisa trumping Bartkowksi’s goal, Bartkowski’s mom Beth came and ripped the mic from Hutton’s hands and laid this down.

It warms your heart. Vancouver’s lovely, the mom’s are lovely, I’m having the time of my life, and the icing on the cake is my boy scores! My boy scores!

She dropped the mic and the people loved it.

OK back to real life – Dave Tomlinson revealed some stunning news regarding the McPlann over TSN 1040 airwaves Monday.

For weeks we’ve heard Benning talk about the plan the Canucks have for Jared McCann and Jake Virtanen. Benning’s referred to a schedule that maps out when the youngsters will sit out games so they can work out and maintain their bodies over the remainder of the season.

Last week, when McCann played the Columbus game instead of Virtanen (Virtanen had been doing line rushes for two days as if he’d be playing), many were stunned.

Tomlinson’s revelation was that McCann said he only finds out he’s playing the day before a game.

So what happened to the McPlann?

I asked my followers (because you can’t argue with the results of a Twitter poll):

What do u think this says about the McPlann?#Canucks

There you have it, the poll has spoken…

There is no plan.