You know the season’s gone the wrong way when all anyone wants to talk about coming out of a 5-1 win is who’s getting traded.

This is with Henrik Sedin putting up four assists, Daniel putting up three, and Jannik Hansen scoring two goals.

None of those are the story.

Ending a four-game losing streak (and of course the 4-game 5-2 scoreline streak you’d grown to love), the win got Vancouver to within seven points of Nashville, the team holding the final wild card spot in the West.

No, the bandwagon did not get any fuller.

The only fans still on that wagon are the ones who go down with the ship – and good for you guys, because that’s not an easy job.

Back to the story – how did this game affect trade values? Items one and two should help answer that.

The way Vrbata’s been playing lately, he’d almost removed any trade value he had. But finally, finally he scored.

Obviously it came on the power play with the Sedins – weird how he plays well when put in offensive situations (weird to the coach and no one else, really).

Proof Benning has been shopping Vrbata:

Every scout up here was scribbling detailed notes after Vrbata’s goal. Not even joking. #canucks

Interesting note – with all these scouts in town, and with the Canucks clearly shopping Vrbata, he’s moved to a line with McCann and Burrows. Instead of being buried at the defensive end with Bo Horvat’s line – the one that takes the least offensive draws – he played with the line that took the most offensive draws against Colorado.

Something tells me that move is not only a Willie decision.

Crazy isn’t it? Last season a goal from Vrbata was as reliable as a Swiss watch – they just kept ticking. Now he’s more like that fake Tag you bought at the market in Thailand or China – if it works, it doesn’t last.

He left the game after going down awkwardly here.

Willie, on Vrbata’s injury after the game: “We’ll see, we’ll evaluate it tomorrow and see where he’s at.”

The backlash if Shinkaruk isn’t called up if Vrbata is out should be something else.

what has he seen since 2002 pic.twitter.com/RpLbwxmx6v

He used to smile for pictures. Imagine.

So how are fans feeling about possibly moving Hansen?

Many don’t want him gone.

@omarcanuck keep. No one else plays that style with the sedins anymore. They need him too.

While some see the benefits.

@omarcanuck you gotta trade everyone who can get picks at this years draft. You never know they might luck out one of these years.

My favourite take (because it’s dead on).

@omarcanuck Trade him now before everyone in Vancouver turns on him next year when he fails to match this year’s production.

And this should set up the next section nicely.

@omarcanuck Better question. What would Hansen get that’s an improvement over Hansen?

Look, if the Canucks really are serious about this rebuild and are not as bad at asset management as they showed with the Frankie Corrado debacle, fans should be hoping they’re at least considering trading Jannik Hansen.

While trading away one of the team’s most consistent and most exciting players will be hard to stomach, at 29, Hansen’s likely having what might be his best season in the NHL. He’s already at 32 points – seven short of his career high, and he’s doing it on a ridiculous 17.7 shooting percentage – by comparison Jamie Benn’s is 16, Patrick Kane’s is 15.9, and Alex Ovechkin’s is 13 – and a PDO of 104.

Playing with the Sedins, Hansen’s o-zone starts are also the highest they’ve been in his career at 56.8.

While there is a possibility the numbers could all be at these levels again, you have to realize everything’s going right for Hansen this season so it’s not likely. Basically, he’s stolen all the puck luck Vrbata had last season.

Trading Hansen makes sense because his stock will never be higher, and to answer Steve’s question above, he’s the kind of piece who can fetch a first rounder or equivalent in return.

Enough on trades (for now) – let’s not forget Vancouver snapped the losing streak.

As good as the Sedins and Hansen were, their play would’ve made no difference if Ryan Miller wasn’t on a mission against Colorado.

By the end of the game, Vancouver was outshot 38-29 and score-adjusted corsi was 51.3-34.9 (from war-on-ice.com). If that means nothing to you, the possession chart from hockeystats.ca should make it more clear. 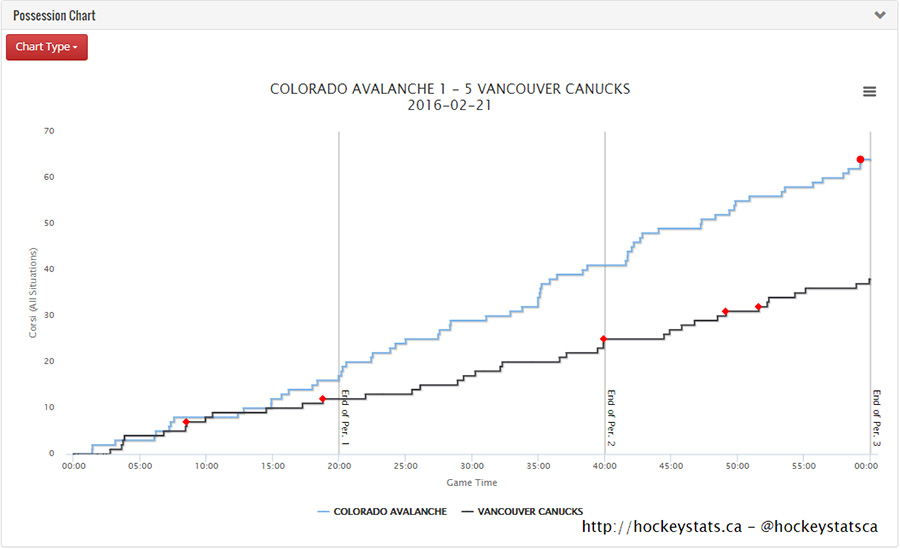 This was Miller’s best save.

If the gif’s too small or jittery on your phone – he stopped it with his right toe, or possibly the blade on his skate.

Sorry to say the most exciting play of the game wasn’t from a Canuck. It came from the 2013 first overall draft pick Nathan MacKinnon.

Miller had that save on Soderberg too.

Millsy had the answer to every shot until he had Jarome Iginla sitting on him so Matt Duchene could score with 42 seconds left in the game.

No, it wasn’t fair that Miller lost his shutout on this.

It raises the question: what’s more fun to watch – dialed in Miller or angry Miller?

With the Canucks seven points out and looking to be sellers at the deadline, fans need something to be hopeful about.

Here are the highlight’s from Brock Boeser’s game Saturday. (if you want to save time, go straight to 1:15)

Note: Thanks to computer hacker Ryan Biech who supplied some of the gifs for this post