Since its inception in 2008, the Canucks Autism Network (CAN) has provided community level support to B.C. families living with autism.

On September 24, CAN will present the Reveal Gala, an exclusive event at Rogers Arena designed to raise awareness, funding and other support vital to helping the charity meet the needs of a growing number of families facing autism.

Vancouver Canucks co-owner Paolo Aquilini and his wife Clara learned firsthand about the emotional and financial struggles families living with autism face after their son, Christian, was diagnosed in 1996. With the help of the Vancouver Canucks, who Paolo Aquilini describes as “vital to our success,” the couple founded CAN and set out to give families in need a better chance for a happier and healthier life.

CAN’s high quality, adapted sports, recreation, social and arts programs are designed to accommodate children, teens and young adults with autism, who can experience varying degrees of difficulties with social communication and behaviour. Through programs such as its Family Adventure Series, CAN makes it possible for parents and kids to participate in activities other families may take for granted. During the Van Dusen Garden Festival of Lights at Christmastime, for example, the garden is opened exclusively to families living with autism. As a parent of a child with autism, CAN CEO, Katy Harandi, understands the importance of building networks of support.

“We love that the families are able to feel safe and understood,” says Harandi. “It’s a way to bring them together so they know that they’re not alone in this journey” she adds.

CAN also provides sports and social programs to help individuals with autism learn and develop skills. Children who had been unable to learn to swim in other programs, for example, are successful in CAN’s program because of its specialized support strategies and high staff-to- participant ratio.

Reflecting on one family’s experience, Harandi says the program enabled them to take their first beach vacation together, something that before would have been impossible. “They were thrilled to see their child in the pool and the ocean – even snorkeling. They thought that would never happen. These are the kinds of success stories that we hear all the time,” she says. 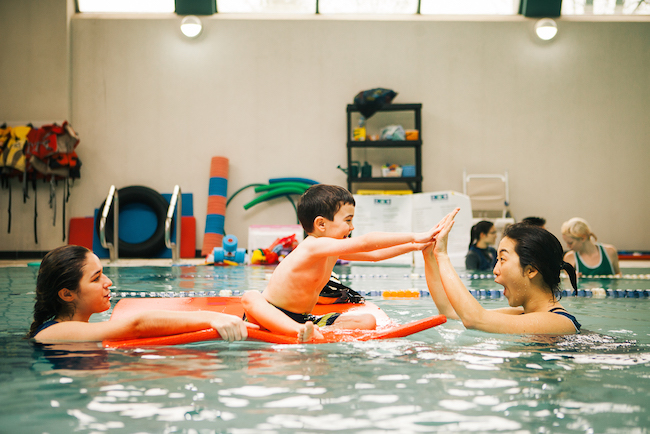 Child playing in water at CAN event (Canuck Autism Network)

The prevalence of autism has increased dramatically in recent years, to one in 68 children in North America. CAN currently serves over 2,000 families, but aims to reach all 10,000 families living with autism in British Columbia, says Harandi. “In order to achieve that, we need more funding and support from our donors, sponsors and community members who also believe in our vision.”

A one-of-a-kind event to be held at Rogers Arena, the Reveal Gala, will transform the arena into an intimate venue for just 500 guests. Attendees will be treated to an evening of surprise guests, gourmet cuisine, and impressive entertainment. In addition to being a fundraising gala, the event is also a celebration, says Paolo Aquilini. “We wouldn’t be half the family we are if it wasn’t for our son Christian. We want to celebrate people with autism and how much they mean to us.”

Vancity Buzz is a proud media sponsor of Reveal Gala.