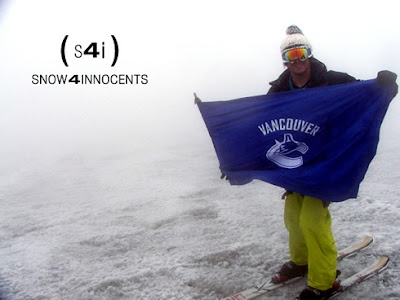 Canucks fans have something new to cheer about in the off-season – they just made it to the top of Africa. On top of Mt. Stanley, Africa’s most challenging mountain, an African-sewn Canucks flag was unveiled at an altitude of 5,000 metres (16,000ft)!

The flag was part of a new charity to raise funds for Uganda’s only dedicated children’s hospital, Holy Innocents in Mbarara. Justin Long of Snow4Innocents (s4i) trekked for 8 days and spent 80km on foot in deep and thick mud to reach the top of Mt. Stanley’s Plateau glacier in the Rwenzori Mountains. The flag was chosen to go to the top by an idea contest held by (s4i) and promoted by the Buzz in May.

On his return, Justin was recognized by a formal opening ceremony of the hospital which was also attended and recognized by Uganda’s Vice President. This success really shows how much of an impact Vancouver is having on the rest of the world.

All of the donations collected by (s4i) are transferred directly to the hospital. Justin Long funded the charity and event himself, ensuring donations are used for hospital purposes only. Justin hopes the charity will inspire Vancouver to help and donate to the successful hospital.