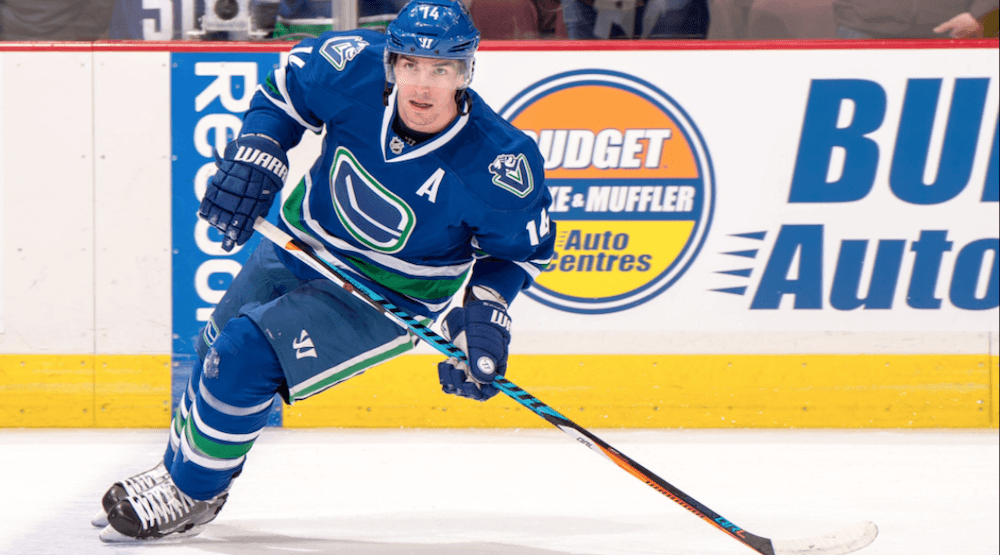 For many Canucks fans, this could be one of the tougher trades you’ll have to stomach.

Alex Burrows is a favourite in Vancouver for a bunch of reasons. The first being that he’s played every game of his 12-year NHL career with the Canucks. Scratch that, the first is probably that he slayed the dragon.

Hey, it was a huge goal.

During the current core’s dominant years, he was the team’s heart and soul. He was the emotional leader, and he’d often turn games on their head in a single shift.

Burrows still has that ability in him, as he showed two weeks ago against Buffalo. That night, he went into full rabble-rouser mode, throwing Sabres’ goalie Robin Lehner completely off his game, and bagging a goal and an assist to lead Vancouver to a win.

What Canucks fans will have to accept is that when you’re building a team, at some point you need to move on from players – even the ones fans love the most.

Vancouver did this when they chose not to re-sign Markus Naslund and Brendan Morrison in 2008 – both were beloved Canucks and fans hated seeing them go.

Their departures, however, left a void that forced the Sedins, Ryan Kesler, and Burrows to step into, to emerge as the new leaders of the team. You don’t need to be reminded how that story ended.

Now the time has come to move on from Burrows – and he’s still got a lot to offer any team that takes him on. He has a no-trade clause, although he’s hinted in the past that he would waive it if the team asked.

Here are some things Burrows still brings to the table at age 35.

The blue bars illustrate their success rates with him, and the orange are their numbers without him. 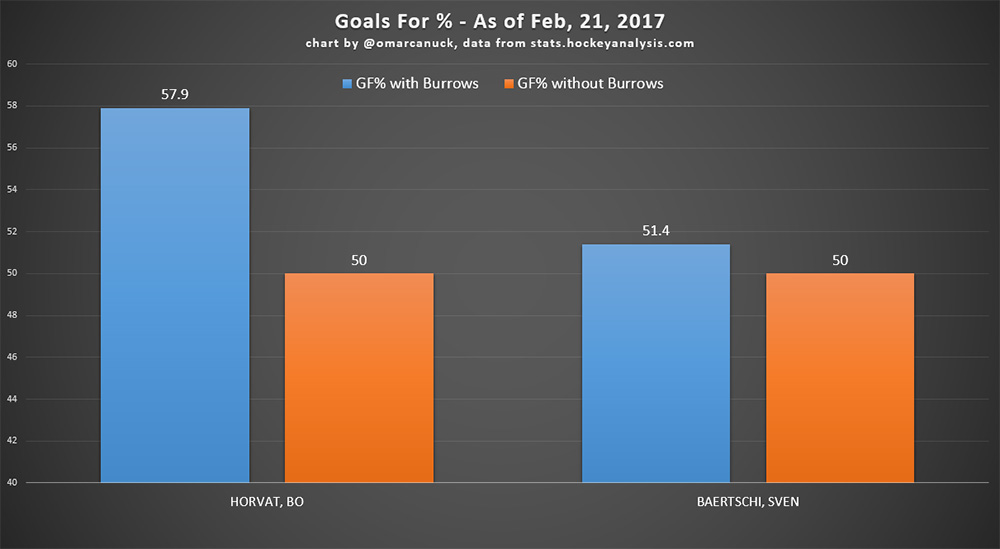 This is a similar graph showing Corsi-for percentages for both players with and without Burrows. 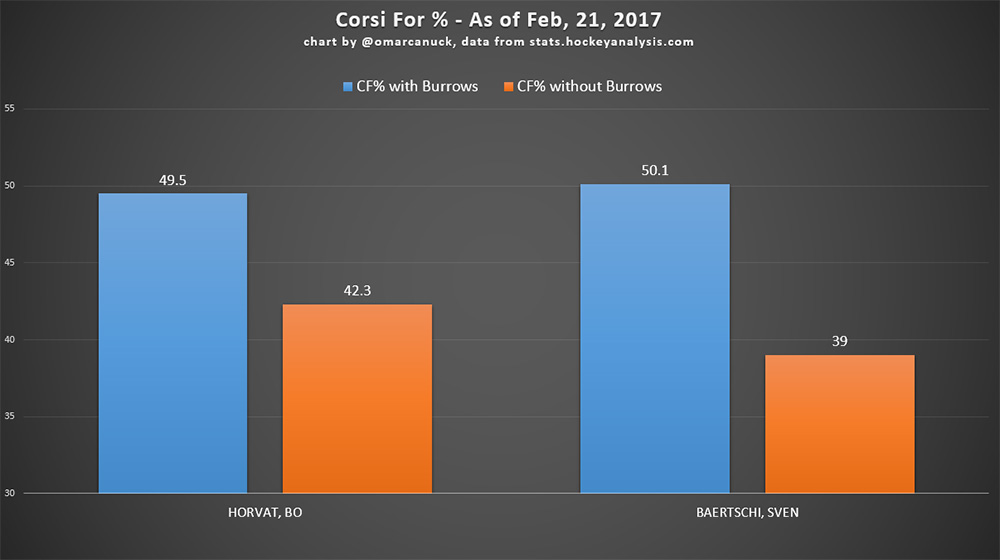 Clearly Burrows has a positive effect on his linemates. He is excellent at getting the puck out of his team’s defensive end and transitioning to offence.

The result is more shifts spent at the offensive end of the ice surface, driving pucks towards the net and creating scoring chances.

Here you can see the individual shot-attempt rates (5-on-5) of all regular Canucks forwards this season. Note that these are not total shots. 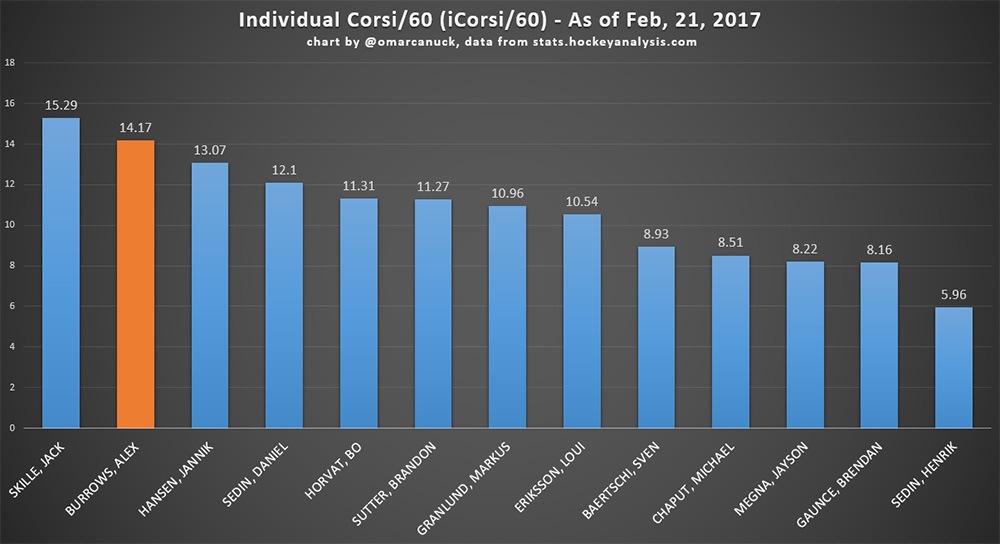 From the graph, you can see Burrows generates shots at one of the highest rates on the team.

With that in mind, you should note his shooting percentage has been 8.3 percent so far this season. His career average is 12 percent, and he was above 16 percent for three seasons.

What this means is if that shooting percentage edges back up over the remainder of the season, with the Canucks or with another team, he will be scoring a more goals considering how much he shoots.

Throughout his time in Vancouver, and even this season, Burrows has played in all situations and on all lines. He has chipped in as a fourth-line dump and chaser, and as a complementary first-line winger.

Burrows kills penalties efficiently and he helps as a net-front presence and puck retriever on the power play.

While it’s hard and usually pointless to try to quantify experience and leadership, it certainly adds value.

Burrows was the winger on one of the league’s best forward lines for three years – a line that powered its team all the way to the Stanley Cup Final. He has scored goals ranging from massive to iconic, and he brought it in the biggest moments.

On leadership – the thing about Burrows is it’s never been a single shift effort. In his prime, it was a night-in night-out relentlessness, a reminder that if you played every shift harder than the last, you’d always have a chance to win.

In a time long forgotten, Burrows led the ‘win da turd’ rallying cry for the team that had the most third period comebacks over a two-year span, from 2009-2011.

For all he’s done for Vancouver, Burrows deserves another shot at the Cup. And for all he does on the ice, whichever team acquires him will have a better chance of winning with him in the fold.