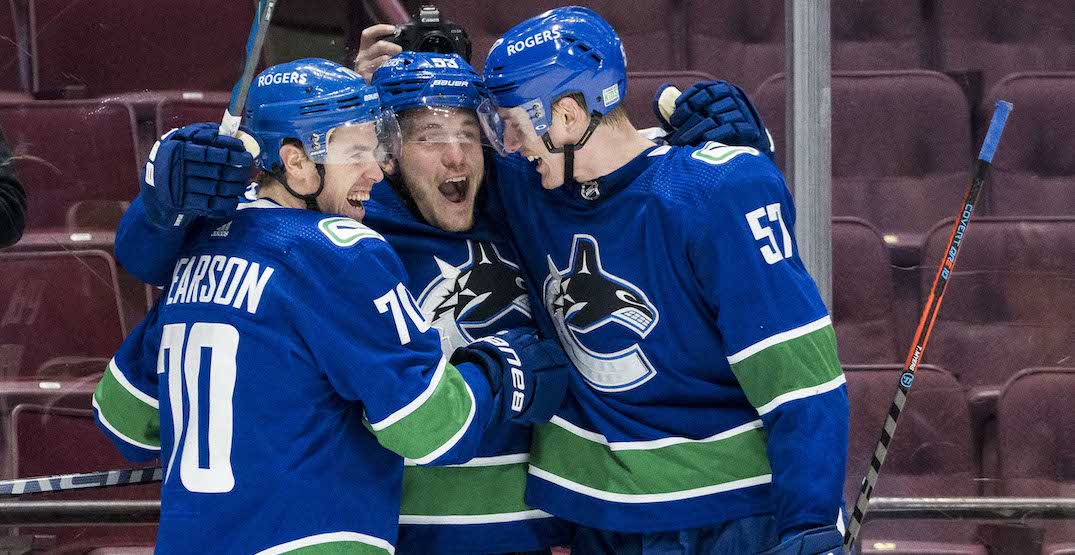 The Vancouver Canucks have announced their team award winners for this season, including a surprise pick for MVP.

Today’s game against the Calgary Flames is the final home game of the season for the Canucks, who will play their final road game tomorrow afternoon in Calgary.

Five awards were handed out today, with four of them (MVP, Best Defenceman, Most Exciting Player, and Unsung Hero) decided by a fan vote.

Here’s a look at this year’s award winners.

The Captain himself, Bowie William Horvat, is this year's Cyclone Taylor Award recipient–as voted by you #Canucks fans as the Most Valuable Player! 🏆 pic.twitter.com/448kxmE09H

Bo Horvat is the surprise winner of the MVP award this season. The Canucks captain finished fourth on the team in scoring, with 37 points in 54 games.

Many expected leading-scorer Brock Boeser (45 points in 54 games) or Thatcher Demko (.914 save percentage in 34 games) to win this award.

For the second straight season, Quinn Hughes has your vote for the Walter 'Babe' Pratt Trophy, as the #Canucks Best Defenceman! 🏆 pic.twitter.com/eovDk2W8iH

Quinn Hughes has been named the team’s best defenceman in back-to-back years. The 21-year-old wasn’t as reliable defensively this season, but his eye-popping offensive numbers — 40 points in 54 games — are hard to ignore.

He came in with a bang during his #Canucks rookie season💥. Give it up for Nils Höglander, your 2020.21 Pavel Bure Most Exciting Player recipient! 🏆 pic.twitter.com/vTZ4tw0sSZ

Rookie Nils Höglander captured the Pavel Bure Award, given to the team’s most exciting player. Höglander currently ranks fifth in scoring on the team with 26 points in 54 games, and was one of the bright lights in an otherwise dark season.

Not to out-do himself, we have a double award winner! 🔥 Tyler Motte has been voted the Fred J. Hume Award winner, as the #Canucks Unsung Hero! 🏆 pic.twitter.com/Av7OLMhXxL

He only appeared in 24 games this season, but it was enough for Tyler Motte to be named the team’s unsung hero. Motte has scored nine points and is well regarded for his effort-level and penalty-killing prowess.

Motte also won the Daniel and Henrik Sedin Award, which goes to the player that best exemplifies outstanding community leadership qualities and humanitarian contributions to his community.

Motte is also the Canucks nominee for the King Clancy Memorial Trophy, as well as the Bill Masterton Trophy, which are league awards that will be announced at a later date.