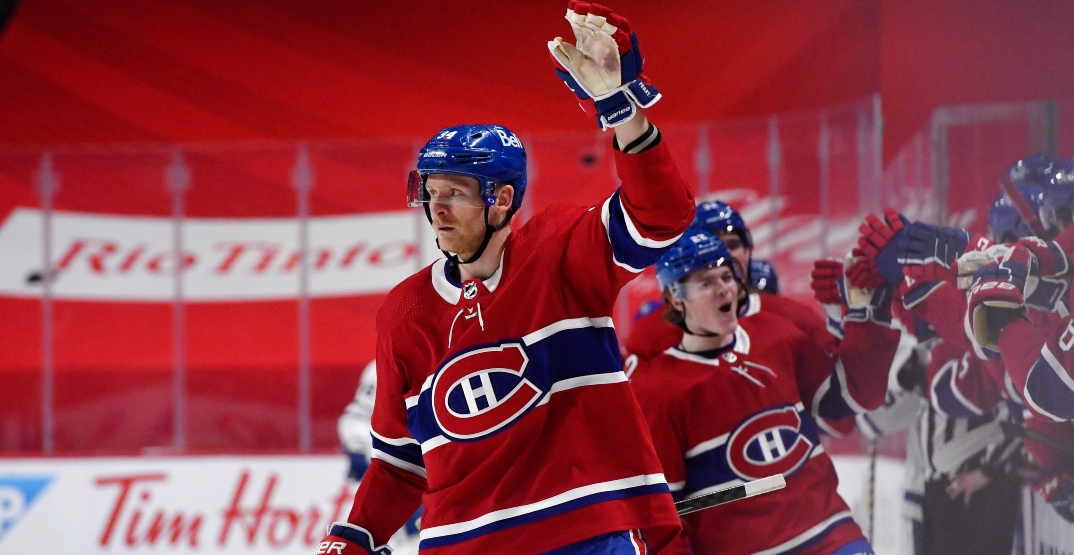 The Montreal Canadiens celebrated the return of fans to Bell Centre on Saturday with a 3-2 overtime win over the Toronto Maple Leafs to force a Game 7 back in Toronto.

Jesperi Kotkaniemi, a healthy scratch in Game 1, played the hero with his third goal of the series.

Scoreless through two periods, the Canadiens opened the scoring on the power play just over five minutes into the third when Corey Perry put home a loose puck after a mad scramble in front of the Leafs net.

That snapped a 25-game goalless drought for Perry, his first tally since April 7.

Maple Leafs coach Sheldon Keefe apparently didn’t fear the Habs’ power play too much — Perry’s goal was their first with the man-advantage in the series after an 0-for-15 start — because he issued what seemed like a long-shot challenge for goalie interference. The goal was confirmed after a short review, with Toronto getting a delay of game penalty for the failed challenge. Then just 19 seconds later, Mitch Marner shot the puck over the glass for a delay of game penalty of his own, giving Montreal a lengthy 5-on-3 power play.

With the two-man advantage, Tyler Toffoli, the Habs’ leading goal scorer in the regular season, finally got his first of the series.

Just as they did in Game 5, though, the Leafs made a late push. Jason Spezza got them on the board with just over eight minutes remaining in the third period, scoring his third goal off the series with a deflection off Jeff Petry’s stick and past Carey Price.

Then with just over three minutes remaining, T.J. Brodie tied things up with a shot that also deflected in off Petry.

For the second straight game, Toronto erased a two-goal deficit in the third period and was in position to win the series in overtime.

The Leafs dominated the play for most of overtime, finishing the extra frame with a 13-2 edge in shots, but Price came up big for the Habs until Kotkaniemi could win it with just under five minutes remaining in the first overtime period.

Price finished with 41 saves on the night.

To make matters even worse for a Leafs club suddenly facing elimination, they lost one of their top defencemen in Jake Muzzin to a lower-body injury in the second period.

Here is what took Muzzin out. Looks like he pulled something pic.twitter.com/hWWYh1CFCZ

Muzzin appeared to signal to the Toronto bench as he was getting off the ice that he was injured badly enough that he wouldn’t be able to continue. He did not return to the game and Keefe didn’t provide an update on him afterward, but it’s safe to say Muzzin’s availability for Game 7 — and beyond, if there is a beyond for the Maple Leafs — is in serious question.

Game 7 will go at 7 pm ET at Scotiabank Arena in Toronto on Monday. The winner will advance to face the Winnipeg Jets in the second round.