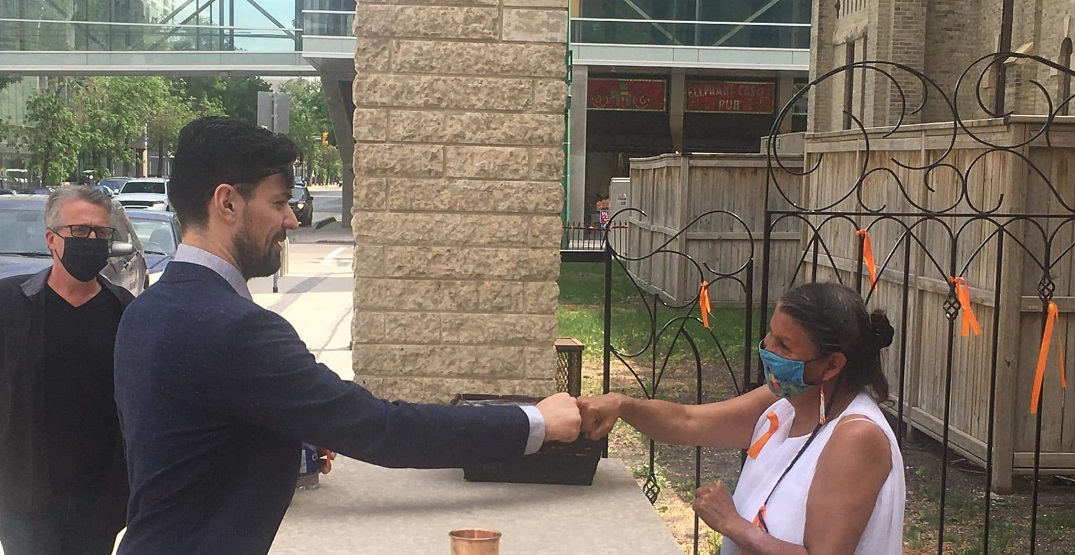 Montreal Canadiens’ Carey Price is fighting back against the idea that athletes need to solely “stick to sports.”

Prior to Friday’s Game 2 in his team’s series against the Jets, Price showed up to a Winnipeg rally in support of residential school survivors.

Price was photographed bumping fists in a since-viral photo with survivor Gerry Shingoose, who attended Muscowequan school from 1962-1971 and has since become a community advocate and public speaker.

Here at St. MARYS CATHEDRAL, WPG waiting for Archbishop Gagnon. SURVIVORS are seeking Justice. Then Carey Price, Montreal Canadians stops to talk with me Gramma Shingoose. He was gifted a Tobacco Tie and Orange ribbon 🧡🧡 pic.twitter.com/9baVO9Xjs5

The event was organized following the discovery of an unmarked grave containing the remains of 215 children on the grounds of the Kamloops Indian Residential School in British Columbia.

Price is of Nuxalk and Southern Carrier heritage, and his mother, Lynda, is a former chief of the Ulkatcho First Nation in British Columbia. His grandmother was a residential school survivor herself.

Throughout his illustrious career, Price has continuously advocated for helping Indigenous youth achieve their goals inside and outside of sports.

“People would say it’s very improbable that I’d make it to this point in my life,” he said in his acceptance speech for the Vezina Trophy in 2015.

“I made it here because I wasn’t discouraged. I worked hard to get here, took advantage of every opportunity that I had. And I would really like to encourage First Nations youth to be leaders in their communities. Be proud of your heritage, and don’t be discouraged from the improbable.”